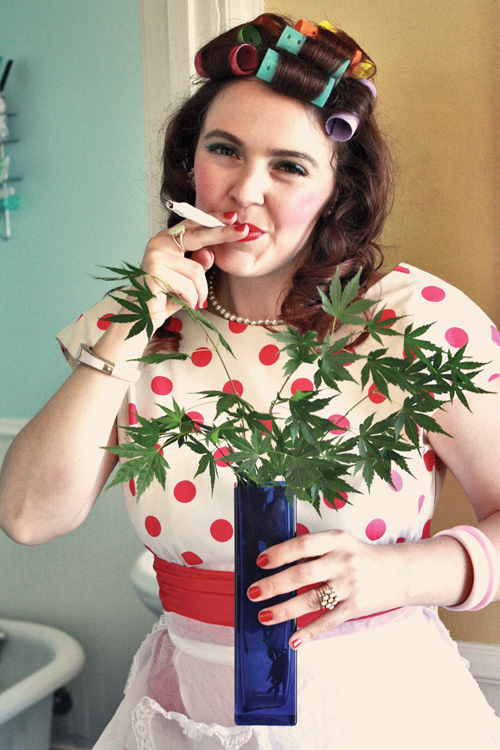 HERBWISE This is the image that could very well legalize weed in the United States, if not on the books then in our national subconscious: a be-curlered, white-bathrobed housewife ducking behind the backyard clothesline for a quick toke before her adolescent son comes to ask her to wash his gear for the Little League championship tomorrow.

Dee Dee Kirkwood thinks so. The playwright behind Toke places the image at the center of an opening scene in her semi-autobiographical play about a woman and her weed.

“It’s all positives, there are no negatives about marijuana,” chirped Kirkwood over the phone the day after the friends and family preview performance of Toke. “I wanted to focus my writing on making a change, helping cannabis smokers, and helping people come out of the closet.”

Out of the closet? Kirkwood does put much truck in marijuana as a libido-enhancer, and noted Bay sexologist Carol Queen is slated to step into the pointy high heels of Toke‘s pot fairy character for the second two weeks of the play. Sexuality is in the air of Ashby Theatre as much as smoke, in fact — but Kirkwood’s talking about an entirely different kind of self-realization here.

The climactic scene of Toke takes place after protagonist Wee Dee (get it!) has surfed the seas of kitchen table abortions, Post Traumatic Stress Disorder-having Vietnam vet first loves, radical European commune life, and a confining marriage to the father of her two children — happenings that Kirkwood’s script manage to make touching and madcap in turns. The character is plucky, likable, fun, so it makes sense when her second hubby encourages her to take that indomitable Wee Dee spirit and channel it towards marijuana activism.

So she organizes an event. It’s not important what the event is, because it’s at the end of an already-wacky play and if you’re not stoned by that point, it’s not clear why you at a production called Toke to begin with.

What is important is that after Wee Dee has listened to the This is Your Life-style cassette tape of various blasts from the past wishing her well, she emerges onstage with a glittering, Beach Blanket Babylon-esque cannabis headdress. She announces “I’m coming out of the closet! I’m green!”

And boy does the audience cheer. Wee Dee is a hero.

Toke is Kirkwood’s raison d’être. She doesn’t consider herself a career activist, just wants to lead people to more morality-based look at marijuana’s outlaw status, even though the unjust incarceration issue doesn’t get much play in Toke. As a wife and mother, she wants others to share in the happiness that the dro has brought to her life.

And — if it ever makes it out of Berkeley’s green hills — one could see Toke performing similar feats for weed that Eat, Pray, Love enacted on Middle America’s acceptance of yoga and women traveling solo.

“If it ever makes it out of Berkeley” being the key phrase there, of course.