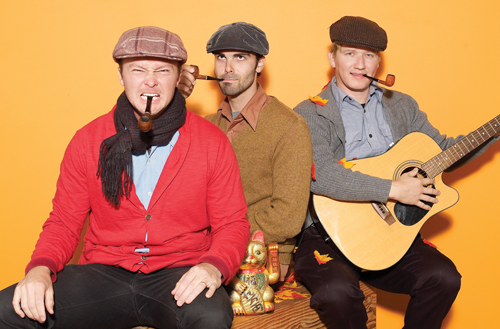 This is the story of il gato, a San Francisco band that describes itself as indie-baroque-folk. Its music is baroque in the sense that it’s melancholic yet upbeat, lyric-heavy yet leans towards the classical, and highly decorated with a wide array of instrumentation. The band’s 2010 long-player, All These Slippery Things (self-released), and similarly-named followup EP All Those Slippery Things (released last month) feature banjo, mandolin, piano, a string quartet, and trumpets, along with aggressive acoustic folk guitar, looping pedal, upright and electric bass, and complex drumming.

After years of dutiful practice in tiny apartment kitchens, labored songwriting, and intimate live shows, the group finally recorded (thanks to a grant from the Bay Bridged blog) in 2009 at legendary studio Tiny Telephone, owned by revered local musician John Vanderslice. “I…remember how eclectic and fresh their instrumentation and arrangements were,” says Vanderslice. “They were a blast to have in the studio.” But this all came a decade after the first seedling of the il gato concept. Fittingly, the band’s journey — a mildly operatic one, given the twists and bumps along the way — began in Italy.

THE PROLOGUE: Daimian Holiday Scott is studying architecture abroad in Vicenza, Italy. The year is 1999; he hasn’t picked up an instrument since middle school. All of those niggling emotions involved with overseas travel had led to an outburst of emotions, which, naturally, led to buying a guitar. The initial concept was performance art: he’d speak with a fake Italian accent but sing cover songs in English. That never actually happened. “It’s the story before the story,” says il gato drummer, Johnny Major, “the prelude.”

THE FIRST ACT: fast forward five years. Scott shuts the door to the bedroom and asks his girlfriend to listen to the songs he’s been working on from a safe distance in the living room. “It took a long time for me to break free of being super shy and inhibited,” Scott says.

Scott was in his native Gainsville, Fla. writing songs on acoustic guitar and harmonica, learning that to be a songwriter, one must evolve out of the bedroom. He moved to the Bay Area in 2001, first to Berkeley and later, the Mission District of San Francisco, playing as il gato with a rotating cast of talented musicians friends. Years later, when he longed for consistency, he put up an ad on Craigslist seeking musicians.

Major, a San Francisco native who had recently returned from a two-year stay in Chile, answered it. “I liked the name,” says Major, “And of course, I really liked the music. I thought he sounded like a combination of Isaac Brock from Modest Mouse and Doug Martsch from Built to Spill, two of my favorite bands.”

Major — who has played in a variety of other bands including Sang Matiz and his new solo project, Adios Amigo — listened to Scott’s first album Conversation Music, which didn’t have drums, and heard some interesting potential for percussion. During this time, in 2008, Scott, Major and multi-instrumentalist Matthew Souther (who left the band a few months ago) would play in Major’s street-level Lower Haight apartment. The band next gained bassist Andrew Thomas, a Dallas, Tex.-born musician who had recently moved to SF with his girlfriend after a stint in college and other touring bands in Los Angeles. Scott and Thomas had been introduced by their girlfriends one night at the Latin American Club. “He came over the next week to my apartment in North Beach, we just played guitar and upright bass in my kitchen,” says Thomas of Scott.

ACT TWO: the end of an era. Scott’s aria, his solo work in effect, officially comes to an end. He’s part of a band now, all equal parts. “It was no longer just my project,” he says, taking a sip of Pabst Blue Ribbon. Over the course of four short days in February of 2010, the band essentially recorded two albums (the full-length and E.P.), 17 songs in total. The guitar, bass, vocals, and drums were all recorded live at Tiny Telephone. The overdubs of horns and string sections were recorded in Thomas’ home, to save time and money. “I can’t believe it turned out as well as it did,” Major says.

And it did turn out well. The songs are striking and wholly unique. That said, there are hints at the groups’ influences like Neutral Milk Hotel, Beirut, Modest Mouse, even Violent Femmes. But there are other elements, even hip-hop tucked in some parts as Major points out, especially in the mouthful of talk-sung lyrics in brassy folk single, “On Feathers and Arrows.” Major and Scott then discuss Scott’s predilection toward reggae beats, a holdover from his childhood with hippie parents. “That’s the nature of trying to describe your music to someone, it’s always difficult,” Scott says.

He adds that he is also influenced by the non-musical: acerbic, witty writers such as Kurt Vonnegut, along with films like Paul Thomas Anderson’s Magnolia. The band was recently featured on the soundtrack for the documentary Crime After Crime, something Scott is hoping to do more in the future.

ACT THREE: that future. The band has a handful of shows lined up this fall, including Cafe du Nord this week and Andrew Bird’s “Rock for Kids” fundraiser Sept. 19 at the Make-Out Room, along with some brief tours planned. Then, in January 2012, il gato wants to go back to Tiny Telephone to record a followup. Sitting in the back patio, chatting about the projects to come, the group’s goals are clear. Right now, all three are primarily focused on the band itself. In 2009, Scott was laid off from his job as an architect and Major was laid off six months ago. “I’m hopefully looking to break in to something else,” Major says. “Ideally, I’ll have a career as a performing musician, it’s difficult but that’s the dream for all of us. That’s why we’re here right now.”

Check out il gato’s favorite local eats here. They’ve got some good ones!

With Sallie Ford & The Sound Outside