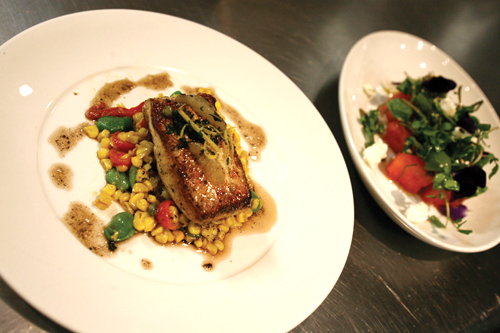 DINE In Bizarro world, dinner would begin with dessert — I know someone who truly hopes this particular sun will indeed rise in the west one day. And if your pastry chef happened to be James Ormsby, you not only would probably not get around to your savory courses, you might very well not be able to get up from the table. Ormsby, interestingly, is the pastry chef at the newly opened Bluestem, and he does not disappoint, though his confections are right where convention says they should be, at the end of the meal.

Bluestem occupies a spot at the Market Street head of the block-long Yerba Buena pedestrian mall, which has become a mini-restaurant row, with Amber and Tropisueño just steps away. But the new place does bring a distinctive identity, as a kind of New American brasserie, with steakhouse-y overtones, to the ménage. Also, the floor is striking: a mosaic of wood tiles cut from a single tropical tree. Each looks like a giant version of a cell being examined on a slide under a microscope.

Ormsby, who ran the kitchens at PlumpJack Cafe and Jack Falstaff, is probably better-known than the man in charge of Bluestem’s savory operation. That would be Sean Canavan, whose pedigree is not unimpressive; he’s cooked at La Folie and Jeanty at Jack’s, among other places. His Gallic background is perhaps most apparent in the restaurant’s charcuterie service, which has a build-your-own angle. The base price ($8.75) brings you sweet mustard pickles, several spears of grilled bread, smears of fruit chutney and stone-ground mustard, and a choice of meat — from rustic country paté with pistachios to duck rillettes and pig’s head terrine — and you can add others for $2.50 each. Although refrigeration is a basic aspect of food safety in our time, it turns out that charcuterie, like wine, can be served overchilled, and if it is served that way, a certain creaminess is lost. If you’re going to eat all that fat, you should at least have the sinful sensation of it on your tongue.

In the more temperate latitudes we turned up a corn and fava-bean succotash ($5), a marvelous, deeply American dish deeply influenced here, in color and flavor, by strips of roasted red pepper. At first I wondered why the menu made no mention of the dominant ingredient, but I came to suppose that corn and beans mean succotash, while red pepper doesn’t — plus, fava beans are rather glamorous, if any bean can be said to be glamorous. Still, red-pepper succotash would have given a clearer sense of this elegantly composed dish.

A great virtue of brasserie-style cooking is that it isn’t overwrought, and Canavan’s main dishes are exercises in well-controlled forcefulness. He allows ingredients to speak in their own way. This can be a tricky path when dealing with seafood, which so often needs a deft touch or two. Halibut is one of the rare fish (tuna is another) that can largely stand on its own, like beef, and Bluestem’s version ($24) consisted of a brick-like filet, topped with brown butter and set on a broad, flat pediment of cheddar grits (substituted for the succotash). The fish was firm, moist, and flaky — perfect — and the accompanying elements boosted it rather than trying to compete.

Calf’s liver ($21) I just don’t like and never will, but there are those who take to it almost as if it were a dessert. Here the flaps of sautéed meat were embedded in mashed potatoes, topped with ribbons of caramelized onion, and — nice touch — given a bit of smoky-sweet harmony by grilled-peach quarters.

A few housekeeping odds and ends: You get bread only if you ask for it. There is much to recommend this policy as a matter of reducing waste and the eating of needless starch calories, but it does seem stingy. Your server will also set one more bottles (still or fizzy or both) of complimentary water on your table; but then, annoyingly, some member of the staff will pop by every few minutes to see if you’ve had a sip, whereupon your glass will be topped up. I found this attention to be slightly maniacal — a restaurant version of hovering helicopter parents.

Ormsby’s desserts: well, they’re worth the wait and all the water refills. A Bing cherry sundae ($8), served in a parfait glass, could have sprung from 1950s soda fountains. It consisted of cherry gelée, fresh cherries, cherry sorbet, vanilla ice cream, and a couple of chocolate-chip cookes. There also seemed to be something crumbly inside. My only criticism would be that because Bings are sweet and mild, their delicate flavor suffered in the cold. A shot of Kirsch might have bucked them up a bit.

The Honolulu hangover ($8) had the layered, slightly boozy look of tiramisù but carried the flavors of chocolate and coconut: a chocolate-coconut layer cake amended with puffs of marshmallow cream dotted with bits of toasted coconut. It seemed to combine, somehow, a tropical flair and the memory of many backyard cookouts on the Fourth of July, with something shamelessly creamy for dessert. The end.