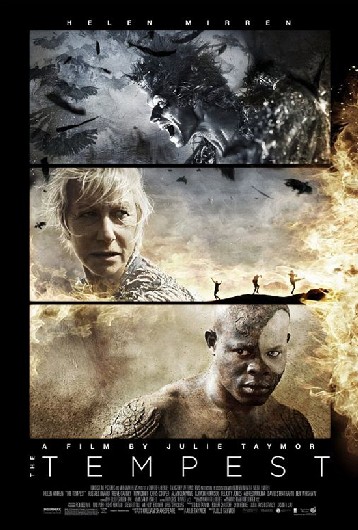 Beninese actor Djimon Hounsou has had an impressive career, appearing in a diverse range of projects and earning two Academy Award nominations (for 2002’s In America and 2006’s Blood Diamond). His latest film is Julie Taymor’s adaptation of William Shakespeare’s The Tempest, in which he plays “freckled monster” Caliban, the rightful heir to the island. I spoke to Hounsou about reinventing Shakespeare, finding sympathy for an antagonist, and sparring with Helen Mirren.

San Francisco Bay Guardian: What was your familiarity with The Tempest before you took on this role?

Djimon Hounsou: None. I had very little knowledge about Shakespeare — I’ve known about his work but to dive into his work, it’s a different story. I have tested for Julie Taymor for [her 1999 film version of] Titus Andronicus before, so that was my first recollection of working on Shakespeare. And that was it. So this time around, I was a little bit intimidated and certainly didn’t want to go the distance with it. But with a bit of trust and encouragement from my wife, I ended up going.

SFBG: What in particular attracted you to the character of Caliban?

DH: Probably his raw nature, his very primal nature of the island, his very passionate desire to get rid of Helen Mirren’s character, Prospera. And obviously the text, the layers of text.

SFBG: Do you see the character as a villain? How did you find sympathy for him?

DH: He’s definitely not a villain. He’s enduring everyone else’s dictatorship approach to the land that belonged to him. That land belonged to his mother and he was born on the island, so having Helen Mirren’s character, Prospera, come take possession and enslave me, was absolutely not acceptable. His rage was absolutely justified. His means and his desires are all absolutely humane and natural.

SFBG: There was obviously a lot of makeup involved in your portrayal of Caliban. How does that affect your performance?

DH: It affects it in a good way. Again, that’s part of the persona of the character. That is the character. So the makeup and the prosthetics and all of that, which again, was very difficult to stand in for four hours just to get the makeup applied. It was a test of your mood or your personality. But other than that, I think it enhanced the role.

SFBG: There’s also a lot of physicality involved. How physically demanding was it to play Caliban and what did you hope to capture with that physicality?

DH: It was physically difficult but I took some butoh lessons that really had more to do with the study of nature’s drama — I call it nature’s drama, life and death and all of the above. So I mean, the connection was quite vivid.

SFBG: Julie Taymor is known for these huge, spectacular productions. But what is it like working with her as an actor?

DH: She’s a director that’s hands-on and obviously lets you run with your imagination, and then she’s able to steer you to the right direction, certainly according to her vision. She has such a great understanding of Shakespeare’s world, and obviously that’s what we’re working on, so it’s a tremendous help.

SFBG: I also wanted to ask about working with Helen Mirren, because you have these dynamic scenes playing against one another.

DH: Yeah, it was wonderful. She’s extremely available as an actor. She’s very there, very giving and supportive as well. It was a beautiful experience.

SFBG: Julie Taymor is also known for putting a modern spin on the classics, and this is a reinvention of the story in some way. How do you think The Tempest will appeal to contemporary viewers who may not be familiar with the source material?

DH: I find Shakespeare to resonate through time, through generations. In that essence and having somebody with such a great passion for the work, Shakespeare’s work, like Julie Taymor. I hope people value it. It’s a human story.

SFBG: What was your tactic for approaching the Shakespearean language? Did you have to adapt to a certain way of speaking?

DH: Not for me. Not for Caliban. I hear people have a certain rhythm of speaking Shakespeare. I didn’t want to be concerned with the language necessarily. I wasn’t sold on a formatted way of approaching Shakespeare. I just went straight and it kind of works for Caliban. He only learned language not long ago. I don’t think that that applies to a character like that.

SFBG: Are there any particular Shakespearean roles you’d love to take on in the future?

DH: Maybe. Definitely it is a language in itself that has so much to offer. I think Othello is a great piece to do. There’s so many great pieces that Shakespeare has done, but as far as a colored person is concerned, to be doing Shakespeare, that’s probably the best Shakespeare to do. We’ll see.