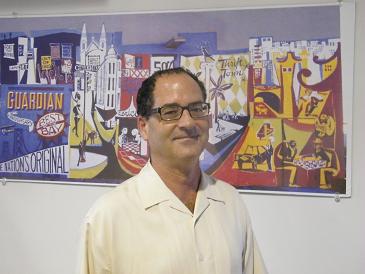 Steve Moss portrays himself as a District 10 candidate who has spent the last decade raising his family on Potrero Hill, working as a non-profit energy guy and publisher and editor of the Potrero View.

But in fact, during 2008 and 2009, Moss wasn’t living on Potrero Hill at all. When he filed his intent to run in the D. 10 race in 2009, he was living near Dolores Park, in a 4-floor 4-unit $1.6 million building he owns, and sending his daughter to Brandeis Hillel Day School, a private establishment near Daly City.

And shortly before he filed his intent to seek office, his wife told friends that the family was only moving to District 10 so Moss could run for supervisor, and that if he lost, they would be moving back to the Dolores Park area.

In his declaration of intent to run, a legal document he signed under penalty of perjury Aug. 4, 2009, Moss listed his address as 2325 Third Street, with a 94107 zip code. That address is where the View and Moss’s nonprofit San Francisco Community Power have their offices, along with M.Cubed, a private company that Moss and two other people founded.
In other words, the building is not where Moss was living with his family.

In fact, evidence that came to light in a lawsuit between Moss and his wife, Debbie Findling, and a couple who co-own the property where Moss used to reside on Kansas Street, indicate that he was living at 296 Liberty St, in District 8, until February 2010.

In a July 8, 2009 email to friends, filed in court as evidence in the lawsuit Moss’s wife noted:

“Steven has decided to run for City Supervisor in District 10!!! (Sophie Maxwell’s term ends in November 2010) so we’ll be moving back to the Hill in early spring! If you hear of any lovely rentals let us know. Or—I know it’s a crazy idea—but if you’re interested in swapping houses with us for a year as an even trade—you can move into our place on Dolores Park! (We’re hedging our bets in case he doesn’t win we’d be moving back to Dolores Park after the elections- If he does win, we’ll find a long-term place to live…).”

A three-day notice to cure or quit that Moss and Findling filed against one of their tenants at the Liberty Street address, which is also listed on public records as 841-849 Church Street, shows that between January 2008 and April 2009, Moss and his wife lived at the Dolores Park address.

For instance, Moss and Findling’s nuisance notice against this tenant notes that on “April 8, 2009, 7:10 a.m.—you pounded on the ceiling of your bedroom for several minutes and cursed repeatedly, “Shut the fuck up!”, severely annoying your landlords and scaring their daughter.”

Moss’s wife subsequently sent out a email in February 2010, alerting folks that the couple had moved from Liberty Street to their current address at 2145 18th Street, SF, CA 94107.

Reached by phone, Moss told us that it was only his candidate intention statement — a form that allows a candidate to start to raise money — that he filed while living at Liberty St. in 2009, not his official declaration of candidacy form. The language on the two forms is slightly different; the intent form only asks for a “street address,” where as the actual declaration of candidacy asks for a “residence” address.

Moss said he filed his declaration of candidacy a few days before the deadline, this summer. That form requires that candidates must have resided in the district for which they are running, for not less than 30 days immediately preceding the date they file. Under city law, candidates must continue to reside, if elected, in the district during their incumbency.
“I’m planning to win,” Moss told us. “And we’re very much enjoying the house on Potrero Hill and hoping to stay there.”
He added: “I have lived, worked and raised my family on Potrero Hill consistently for the last ten years.”

Pressed, Moss acknowledged that he owns an apartment building near Dolores Park. But he said he did not actually evict the nuisance tenant and has since rented out his own family’s apartment in the building.

‘We have not occupied it recently, we have a tenant there,” Moss said. Asked where he is living now, Moss said he’s renting at 18th and Vermont.

Moss confirmed that Andrew Zacks, an Ellis Act eviction specialist, is his attorney in the court case against the co-owners of the Kansas Street property and in the notice to cure that he filed on May 13, 2009.

When we called the city’s Ethics Department, a spokesperson said that they can’t comment on a specific race.
“But if someone signs a candidate form under penalty of perjury and they give an incorrect address, where they do not reside, that would add up to perjury,” the spokesperson, Mabel Ng, said.