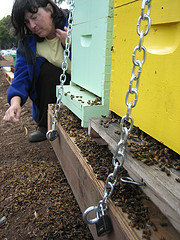 Very sad news about a massive honey bee crime at Hayes Valley Farm: apparently, sometime between the late afternoons of July 19 and July 20, someone sprayed pesticide into two San Francisco Bee-Cause (SFBC) honey bee colonies at Hayes Valley Farm (HVF) and tried to do the same to a third, smaller colony, according to Karen Peteros, SFBC’s bee keeper.

Peteros reports that thousands of bees died immediately or rushed for air in the first two hives, blocking the entrance and making escape impossible. And that he third colony, maintained by Chris Burley, lost 60-70 percent of its members.

She also reports that each of the two exterminated colonies was healthy and thriving and likely consisted of 60,000-100,000 individuals, and was set to produce 20-30 medium frames of honey which HVF planned to sell to support the work of SFBC.

It’s hard to imagine what was going through the perpetrator(s)’ heads. But whatever their motive, it seems there is a need for more education about bees in general and the vital role they play in pollination in particular—a role that helps produce one third of the world’s food supply.

Unlike wasps, which prey on spiders and ladybugs and other insects and have the ability to sting multiple times, bees are entirely vegetarian, a switch their ancestors made back in the great angiosperm explosion some 80 million years ago that produced our modern-day flowers. That switch means bees live on and raise their brood entirely from pollen (also known as bee bread) and nectar, and are unlikely to sting you, unless you approach their hives. (Could be the folks responsible for this massacre got stung quite a few times in the process of spraying all these bees, so that could be a helpful clue in tracking them down.)

But most people consistently confuse wasps, which are hairless and can sting multiple times, with bees, which are fuzzy and can only sting once, and then die, unless they happen to be the queen bee, which can sting many times.
A recent example of the general ignorance about bees were July 2 news reports that folks had been stung by “bees” at the Alameda County Fair’s fireworks show. It turned out that the insects were in fact yellow jackets, which are a type of wasp. But national news outlets repeatedly reported that bees were to blame.