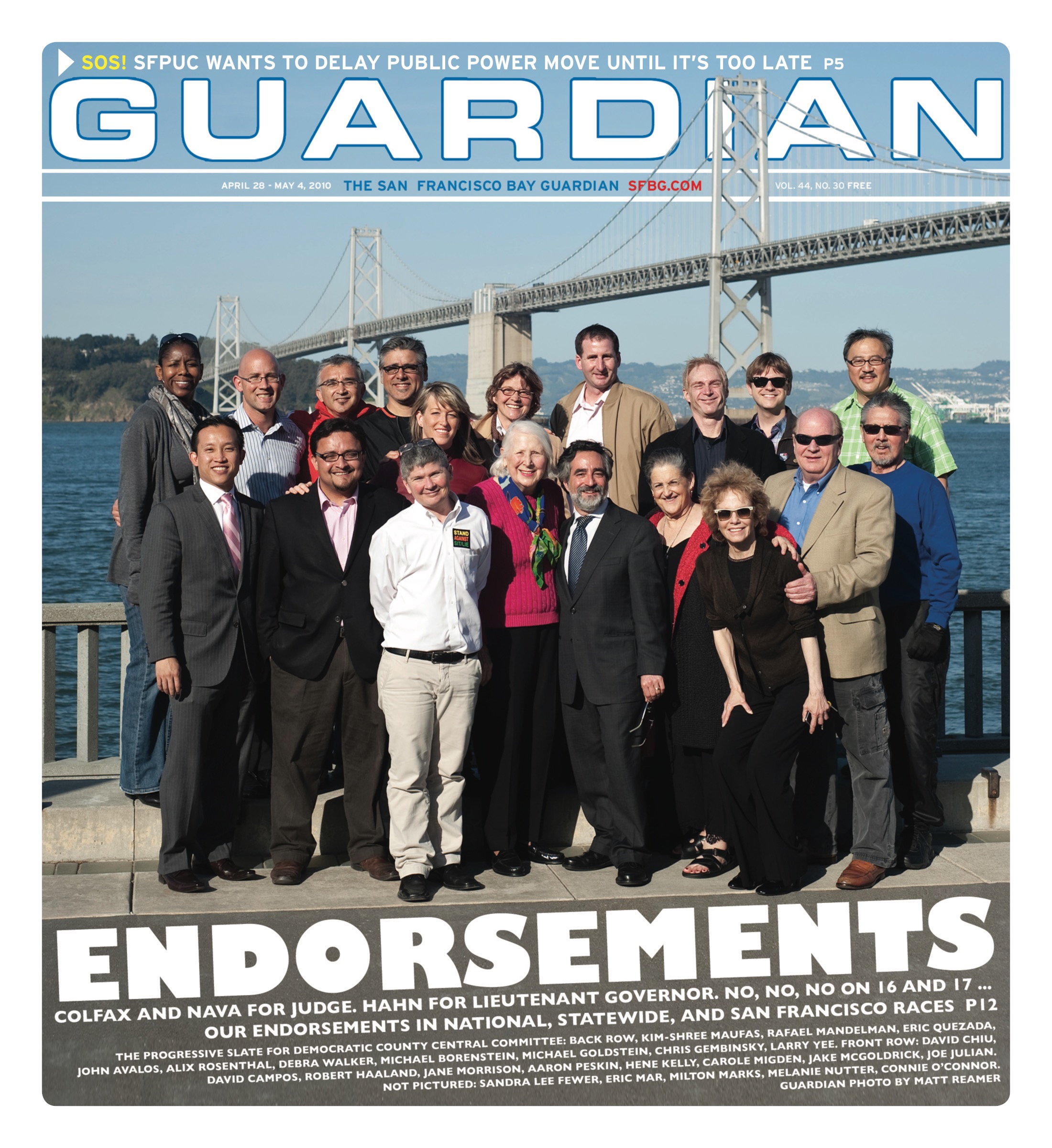 OPINION Since the burst of the housing bubble, we’ve seen a lot of attention paid to the plight of homeowners hit hard by the recession and facing foreclosure. Indeed, President Obama recently enacted a protection for homeowners that requires banks to let unemployed homeowners delay their mortgage payments. But until now there has been little talk and even less action on how we can help tenants who are also in danger of losing their homes.


Tenants need economic relief too. Renters have been particularly hard hit by the housing bubble and the ensuing recession. During the bubble, real estate speculation caused San Francisco rents to increase by an average of 50 percent. When the bubble burst, tenants saw their jobs disappear and incomes drop — but rents remained at record high levels. Evictions for nonpayment of rent shot up as renter after renter found it impossible to keep up with San Francisco’s housing costs.


The June 8 election will give voters a chance to change that. Proposition F will give tenants the right to postpone rent increases when they’ve lost their jobs or seen their wages or hours cut.


Many tenants struggle to pay San Francisco’s sky-high rents in the best of times and, when hit with a layoff or reduction in pay, it becomes even more difficult. Any further rent increases would be devastating and put their housing at risk. Prop. F will provide needed relief to those tenants trying to pay high rents with vastly reduced incomes. Unemployed tenants or those who have seen their wages cut by 20 percent or more will be able to get any rent increase delayed simply by filing a petition with the San Francisco Rent Board and documenting that they are unemployed or have had wages cut.


With the difficulties renters face in one of the country’s most expensive housing markets, Prop. F is a mild and measured response to a very real crisis. Prop. F essentially does what any decent landlord would do anyway: give a break to tenants who’ve just lost their jobs and hold off on rent increases until back on their feet.


San Francisco voters should also give a break to tenants on the verge of losing their homes. Vote Yes on Prop. F.

OPINION If you think the mortgage foreclosure crisis is big, imagine what would happen to San Francisco if rent control were repealed.


With 180,000 rent-controlled apartments currently housing more than 350,000 San Franciscans, the end of rent control would be disastrous. Literally hundreds of thousands would be forced from their homes and forced to leave the city.


The pain and suffering people would face as they lost their homes would be immense, making the foreclosure problem seem insignificant by comparison. Maybe even worse, repealing rent control would destroy forever the soul of San Francisco, eliminating altogether the city’s character and diversity and leaving it nothing more than a wealthy enclave affordable only to the very rich.


In 1979, rent control was adopted in San Francisco, and it was accomplished only because thousands of San Francisco tenants made it happen. People collected signatures, made phone calls, walked precincts, packed City Hall hearings, and demonstrated and marched. Through collective grassroots activism, rent control became a reality. Now many of us think of rent control as something we’ve always had and a law that will always be there.


But we need to face reality: in five months, all limits on rent hikes could be gone. It won’t be easy to save rent control, and we need to begin our work now. The fate of rent control will largely be up to voters in San Francisco and Los Angeles, where most California renters live. Los Angeles tenants are organizing and mounting a strong campaign there. We need to do the same in San Francisco.


The San Francisco campaign to save rent control will kick off Jan. 19 with a citywide mobilization of tenants and allied organizations to plan and begin our work. If we’re going to save rent control, we need the same level of grassroots activism we had when we fought to get rent control in 1979, and we need tenants to come to the Save Rent Control Convention and begin the hard work to keep our homes.


This will be a working convention: following an overview about the measure, we will map out strategies and plans for fundraising, voter registration and education, media strategies, Web site development, rally organization, and all of the other components that make for a successful grassroots campaign. The tasks are many, and there’s not much time.


If we lose rent control, we’ll lose not just our homes but also our city. Saving rent control is not a fight people can sit out and hope someone else will do something about.

OPINION Between 2004 and 2005, Chetcuti and Associates, a Walnut Creek real estate development company, bought eight Mission District apartment buildings. Within the first few weeks of ownership, the company served all the tenants in four buildings with Ellis Act eviction notices. In the next two months, three of the other buildings were Ellised. The company held on to the eighth building for a year before it gave those tenants Ellis notices.


The same is true throughout the city: John Hickey Brokerage, another out-of-town real estate company, gave Lola McKay (who died in 2000 while fighting her Ellis eviction) a notice within weeks after buying the building and then did the same to tenants in a North Beach apartment building – evicting those tenants just five days after a purchase deal closed.


The buildings are then often sold as tenancies in common – essentially, as condos for people much wealthier than the ones who were evicted.


Rampant real estate speculation is bad enough on its own. What makes it worse is that this pattern is also an abuse of everything the Ellis Act was intended to be: a way for long-term landlords to be able to get out of the rental business and retire. When the Ellis Act was passed in 1985, its proponents said its purpose was to allow a landlord "to go out of business when he or she is convinced that they are no longer willing to devote the time, accept the frustration, expose themselves to the liability and other factors of continuing to be a landlord."


Apparently, companies such as Chetcuti and Associates and John Hickey Brokerage decided within days and weeks that they just couldn’t devote the time to or accept the frustration of being a landlord anymore and were compelled to evict the tenants. And that’s the case for hundreds of other real estate investors, many of whom are getting tired of being landlords within days of buying rental property.


Senate Bill 464 – which the State Senate will vote on any day now – would rectify this abuse and return the Ellis Act to its original intent. This bill simply says that a landlord must own property for at least five years before using the Ellis Act to evict tenants. It’s simple and fair, and it hurts only real estate speculators.


The vote is expected to be close – and unbelievably, the bill may not pass because a senator from San Francisco, Leland Yee, has indicated he may oppose it. No other city in California has been hit harder by the Ellis Act than San Francisco – yet our very own senator may kill this bill.


Thousands of residents here have been evicted under the Ellis Act, most of them senior or disabled. Ellis evictions are a crisis in San Francisco and are destroying lives and neighborhoods and communities.

OPINION San Francisco could see an end to rent control — and minimum-wage requirements and a lot of zoning regulation and environmental protection laws and much more — if Proposition 90 passes this November. We could see an end to limits on condo conversions and an end to requirements that developers build affordable housing units and even an end to limits on the height and density of new developments. That’s because Prop. 90 is a clever trap that purports to restrict the use of eminent domain but in reality eliminates all government regulation of land use.
Prop. 90 really says little about eminent domain; it just uses the notion of restricting the ability of government to seize private land as the bait. Most of the initiative is aimed at ending all government regulation of property. Its concept is simple: if any government regulation reduces the actual or potential value of property — even by a dollar — then the government would have to reimburse the property owner the difference.
For example, if a landlord would be able to get $3,000 a month on the open market for an apartment but rent control limits what a long-term tenant has to pay to $1,500, then the landlord would be able under Prop. 90 to sue San Francisco for the difference. Think about that: about 200,000 rental units in the city are under rent control. Say the average difference between the market rent and the rent-controlled amount is $500 per month. That would mean landlords could collectively sue San Francisco for $200 million each month, or $2.4 billion each year. Since San Francisco obviously can’t afford to put half its annual budget into compensating landlords, there would be no choice but to repeal rent control.
Landlords would also be able to sue for the difference between what their buildings are worth as rental properties and what they are worth as condominiums. Any property owner denied the ability to convert to condominiums could then sue for that difference in value. Since a property subdivided into condos is worth about 50 percent more, this bill would be huge.
The list of disasters goes on and on. If a developer is required to make 15 percent of the units in a housing project affordable, then the developer could sue to make San Francisco pay for the lost income. If zoning laws limit heights in a neighborhood to three stories but a developer wants to build a 10-story condo tower, the developer could sue the city for the lost value of those seven stories of condos.
And it’s not just land-use and tenant protection. The city and the state both have minimum-wage laws; potentially, every business owner could sue to demand compensation for the loss of income that came from mandating higher wages than the market might have allowed. That would be the end of minimum-wage laws. Environmental protection and mitigation could face the same fate.
Prop. 90 is by far the worst measure on this year’s ballot; in fact, it’s the worst measure to come along in quite some time. It’s a plot by right-wingers to gut the ability of government at any level to force businesses and property owners to accept even basic standards of behavior in the name of the public good. The measure hasn’t gotten a whole lot of media attention, but defeating it should be a top priority for every decent Californian. SFBG
Ted Gullicksen
Ted Gullicksen is director of the San Francisco Tenants Union.