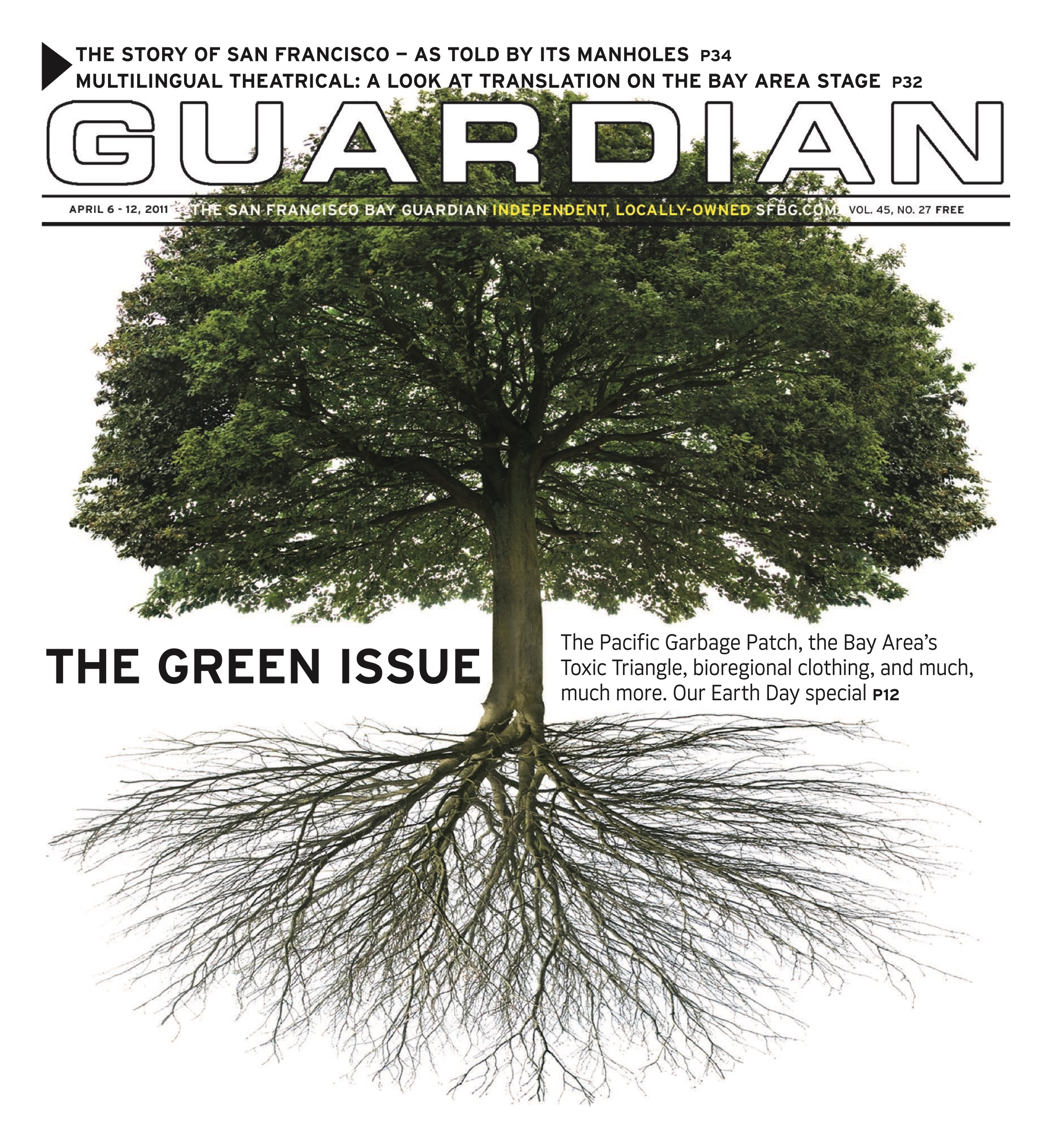 STREETSCAPES I’m Christopher Radcool Reynolds. I am a builder. I always have been. As a kid the only toy I played with was Legos, spending hours creating cities and landscapes. Later in life, along with my best girlfriend Alysia Sebastiani, I created Reynolds-Sebastiani Design Services (www.reynolds-sebastiani.com), a landscape and outdoor construction company. We craft residential and commercial work in the Bay Area, including stone walls and paving; woodwork decks, screens, fences, benches, and pergolas; and lighting and irrigation systems.

I’m an avid student of historic and current civic growth. One of my favorite pastimes is researching the early development and construction of San Francisco. This last year I become obsessed with photographing, researching, and cataloging patent stamps on historic paving, manholes, and sewer vents. I do paving and utilities at work, so this pastime has been a natural pairing of my professional and personal passions. I started using Facebook to collect these images and was surprised by how much response I got by what I thought was a dorky trivial pursuit.

Initially, I loved the manhole and cared less about the ubiquitous sewer vent covers. There is one in front of every building. A small percentage have the mark of the plumbing or concrete contractor that set them. I didn’t think the mass of them was altogether very interesting. As I researched, though, I realized the small sewer vents can be more interesting. Part of the draw is the crap shoot. You never even know if you will find a reference; most have no reference I can find. Some only have directory listings, which helps to date their years of operation but doesn’t really offer any more insight. However, sometimes there are a lot of publications containing information on one particular fellow. That’s the coolest part. You can piece together the life of this contractor who helped build the city so many years ago and would be forgotten if not for the iron bearing their name and some obscure references in obsolete publications. It’s kind of amazing to relive the lives of these individuals.

Unlike the intimate scale of sewer vents, large manholes bearing the marks of an obscure utility or railroad company, though exciting to find, tell the story of big business. This story is more of vast wealth and power struggles and less the story of a individual craftsmen out to seek their fortunes in the Wild West. As one of these craftsmen myself, I can relate to the little guys in the trade, so I like to discover their stories and retell them. Both big business and small business are integral in the story of America. (The difference is, most of the big utility companies already have a Wiki page.) Below are descriptions of interesting items I’ve found on my walk to work. Check the corresponding photo above to see the image they relate to — and for more, visit the “On the Walk” gallery of my Facebook page, www.facebook.com/captainchristopher.

1. Super-cool Works Project Administration sidewalk patent stamp from 1940 on the corner of 22nd and Capp streets. This means that the sidewalk was laid using money from the Works Progress Administration, the Obama stimulus money of the 1930s and ’40s. (Editor’s note for font freaks: the WPA used more than 900 typefaces on its projects, most of them handmade and most of them emblematic of the Art Deco design sense of the time. The squared-off “9” and “0” in “1940” make this stamp a particularly unique beauty.)

2. When new materials enter the market, they first imitate the product they replace. Early plastics imitated wood. Early vinyl imitated leather. Early concrete was marketed as “artificial stone.” Only after a new product has gained acceptance by imitation is it free to develop its own identity. In the early years of San Francisco, most all walks were redwood. Only the wealthiest could afford paving in stone. In the mid-1800s, concrete was (re)invented and began to appear as a cheaper and therefore more accessible alternative to natural stone. Anytime you see ‘artificial stone’ in a patent stamp, like this one at 23rd and York streets, you know it’s very early concrete and likely from when the walk was cast for the first time.

3. I knew that Manhattan and Chicago had steam utility companies that sell steam as a power source. How steampunk, right? I didn’t know that downtown San Francisco had an active steam utility company. This manhole cover at Lombard and Sansome streets came as a surprise. Steam is sold to downtown companies and buildings to use for industrial processes and as radiant heat. The steam is pumped through the walls of local buildings to heat them. It offers a very efficient form of heat and frees the building from having to provide space for its own boiler. You can find a map of SF’s steam system here.

4. The Alameda-based Spring Valley Water Company (SVWC) held a monopoly on San Francisco’s water supply from the mid-1800s until it was replaced by the San Francisco Water Department in 1922 during completion of the Hetch Hetchy Dam. This water utility box cover at Capp and 24th streets and others like it have really striking star treads.

5. In 1896, the San Francisco Gas Light Company merged with the Edison Light and Power Company to form the San Francisco Gas and Electric Company. SF G&E dissolved in 1903, and operations were taken over by PG&E in 1905. This cover at 23rd and Alabama streets is for a well where gasoline “drip” condensate is cleared from natural gas lines.

6. This one is driving me nuts! “U. E. & G. Co” at 21st and Capp streets — Union Electric and Gas Co.? United Electric and Gas Co.? The treads are reminiscent of early industrial rivets, and it’s definitely pre-PG&E. Usually if there’s no Wiki reference, there are at least a few references to obsolete companies in period trade publications like the turn of the century Public Utility Reports, or trade journals and directories. But in this case, I seem to have come to a dead end. If anyone knows, please contact me.

8. Here’s an interesting incongruity. A 1907 directory lists the address of this contractor, T.J. Egan, as 503 Castro. The iron-cast sewer vent cover at 20th and Guerrero streets here clearly reads 305 Castro. How funny to discover a 100-year-old typo. I wonder if Egan paid for the listing (or the casting). I wonder if he raised hell over it.

9. Scandal! I found a newspaper article from 1893 that documents a court case involving this company, F G Norman & Sons. This company, along with nine other construction companies, sued the “French Church” for not paying its construction bills. The church, Notre Dame des Victoires, is still standing at 566 Bush Street. This sewer vent cover is at 20th and Valencia streets.

10. The only reference I could find to the “Warburton, plumber” stamped on this sewer vent cover at 19th and Valencia streets was a directory listing from 1862. That makes this plumber the earliest referenced company, or person, of any I’ve found to date.