Lindsey Buckingham sows his own seeds

For nearly 45 years, Lindsey Buckingham has been writing and performing songs with an indelible impact on rock’n’roll; and several of those tracks are nearly universally considered to be among the pillars of the classic rock pantheon.

Perhaps best known for his work with Fleetwood Mac, Buckingham wrote or co-wrote tunes such as “Go Your Own Way” and “The Chain” with the band, and his guitar work and vocals propelled the songs to the hit single and anthem status they eventually achieved.

In addition to his work with Fleetwood Mac, the Bay Area-born and raised musician has recorded several excellent solo records, and contributed a host of tracks to well-known film soundtracks, including “Holiday Road” for National Lampoon’s Vacation.

In recent years, Buckingham has become the subject of a running gag on Saturday Night Live, with comedian Bill Hader doing a impersonation of Buckingham on the faux talk show “What Up With That” where the host (played by Kenan Thompson) always introduces Hader’s Buckingham as his final guest, but never actually lets him speak, cutting him off for ridiculous dance numbers and other outrageous situations to end the show.

Hader does his best serious and pouting expression, leading the host to plead with him not to be mad, ultimately causing the perpetually leather jacket and v-neck t-shirt clad Hader to smile, but still, never talk.

A highlight of the May 2011 “episode” of “What Up With That” was the surprise appearance of the real Buckingham himself, playing guitar and speaking up for his impersonator, resulting in the one of the funniest sketches in SNL in some time.

Buckingham’s ever-evolving musical talents are no joke, however, as the powerhouse guitarist and singer released his latest solo album Seeds We Sow last year. He comes to the Bay for a special one man show at the Fillmore, which promises to touch on both his solo efforts, and a variety of Fleetwood Mac classics.

The She’s on Girls, Women’s Audio Mission, and soccer practice 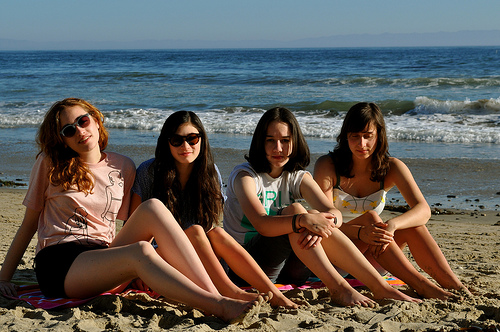 The She’s have opened for Girls, played with Thao with the Get Down Stay Down, and this month, released an infectious, surfy garage-pop debut album, Then It Starts To Feel Like Summer (the record release show is this Saturday at Bottom of the Hill).

Oh, and the band members – bassist Samantha Perez, vocalist Hannah Valente, guitarist Eva Treadway, and drummer Sinclair Riley – are all juniors in high school. But don’t diminish their talent by seeing She’s as a novelty, “young, all-girl band.” They’ve got the chops. I got the lowdown from the Bay Area quartet after school this week, discussing playing against stereotypes, life with punk parents, dream shows (hint: they’ve already played theirs), and kindergarten enemies.