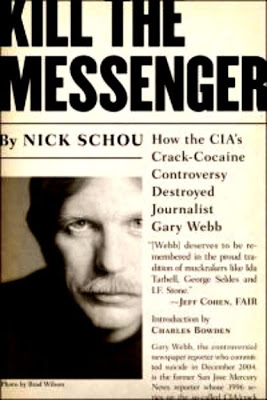 I always enjoy seeing fellow journalists and their work celebrated in a Hollywood blockbuster such as Kill the Messenger, which opens tomorrow. It’s even more exciting when that journalist is someone that one knows and admires, as I did the film’s protagonist, the late Gary Webb, author of the explosive “Dark Alliance” series connecting the CIA to cocaine trafficking in the ‘80s and early ‘90s.

I was happy to run a story on Webb and the film in this week’s paper, a piece written by former Sacramento News & Review editor Melinda Welsh, who hired me back in 2000 to be the paper’s news editor. I had already moved on to the Bay Guardian, in 2003, before Webb came to work for SN&R, so never got the chance to work directly with him, as Welsh did before Webb took his own life (her story, including this longer version from SN&R, is well worth reading).

But I did introduce Webb to the SN&R editor that I worked under, Tom Walsh, who was the worst boss I’ve ever had, a petty tyrant who made most of his employees (at SN&R and later SF Weekly) miserable. I met Webb through some journalistic colleagues one night at a party thrown by Robert Salladay, then a reporter with San Francisco Chronicle and now with Center for Investigative Reporting.

I was star-struck upon meeting Webb, remembering what a big impact his 1996 “Dark Alliance” series in the San Jose Mercury News had on me and other young newspaper journalists at the time. It exposed how the CIA turned a blind eye to the cocaine trafficking into the US that was being done by the Contra rebels that the Reagan Administration was supporting in Nicaragua. Perhaps even more significantly, it was the first big newspaper investigation of the Internet age, showing how online journalism could go viral and reach millions of people.

It was inspiring, but it was followed by dispiriting attacks by fellow journalists who tried to debunk its findings and the conclusions made by many of its readers, who went further than Webb in accusing the CIA of intentionally fueling the crack epidemic as a way of undermining African American communites in big cities.

Those attacks helped deny Webb the Pulitizer Prize that he probably deserved (the CIA’s inspector general later confirmed Webb’s main findings) and led his own newspaper editors to sell him out, fueling his battle with depression and leading him to the job he had when I met him. He worked as an investigator for the Joint Legislative Audit Committee, an investigatory arm of the California Legislature staffed almost entirely by former journalists (he later got laid off during the state’s lean budget years).

We didn’t know each other very well — we had lunch or drinks a few times and he was a helpful source of mine in the Capitol on a few occasions — but we did talk about how he felt betrayed by his profession and yet still longed to get back into the work that he loved doing.

Journalism plays a critically important yet undervalued role in the US, where the profession has been losing journalists in droves to the public relations industry and corporate communications jobs, positions often designed to fool the public instead of inform it.

Welsh calls Webb’s story “a cautionary tale,” and it was indeed, both for journalism and the broader public interest. I’m looking forward to seeing the film, and hoping that it helps humanize Webb and his fellow messengers before we’re forced even further into the margins of civil society.