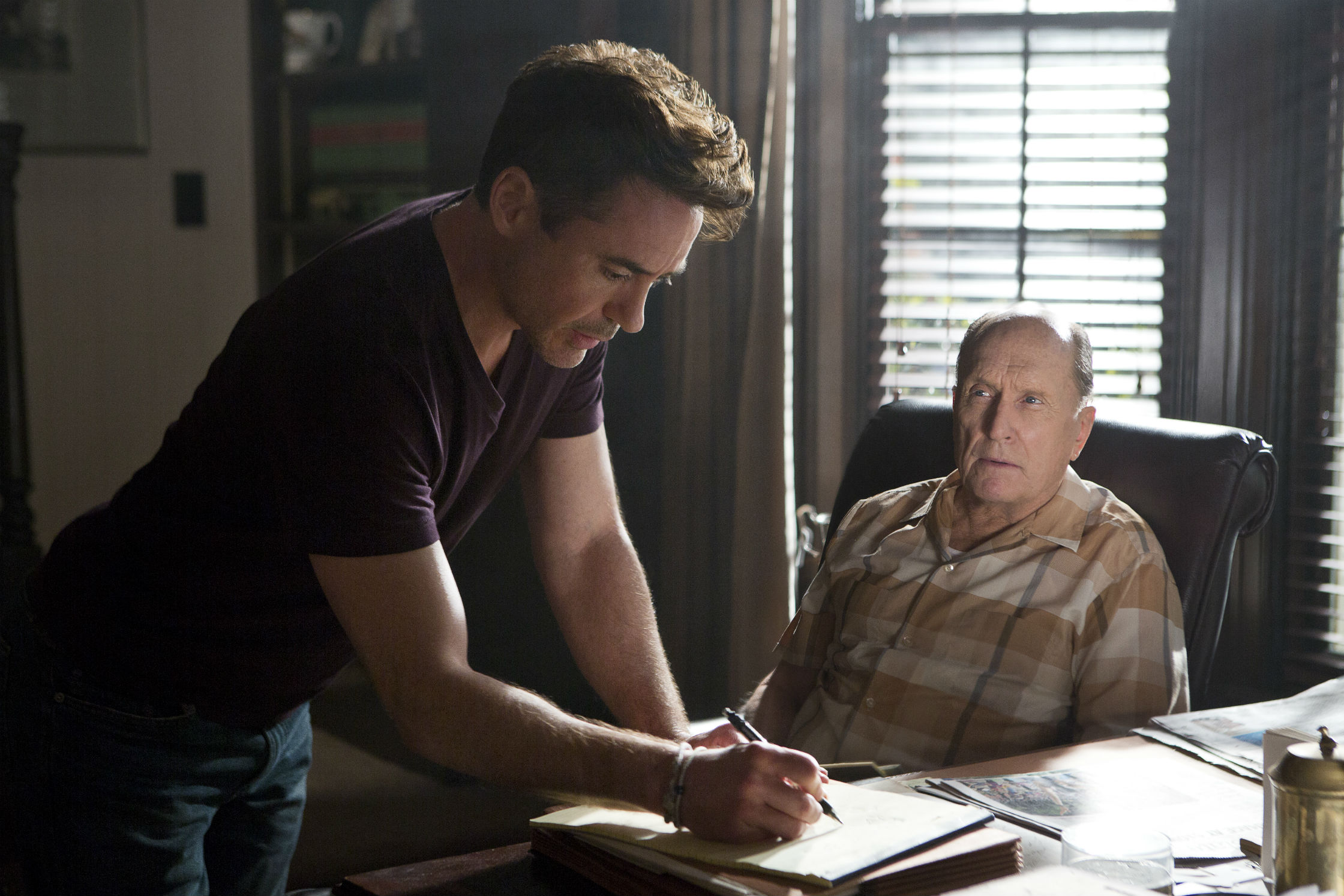 With dysfunctional family tale-meets-courtroom drama The Judge (out Fri/10), director David Dobkin is no longer simply “the guy who directed The Wedding Crashers (2005)” — he’s also the guy who got Robert Downey, Jr. and Robert Duvall to go toe-to-toe. Downey plays hotshot Chicago lawyer Hank, who verrrry reluctantly returns to his rural hometown after the death of his mother; he’s met with hostile hospitality from his aging, long-estranged father, the town judge (Duvall), who verrrry reluctantly allows his son to represent him when he’s accused of murder.

The Judge‘s biggest flaw (besides its nearly two-and-a-half-hour running time and some sentimental tendencies) is that it tries to be too many genres at once. But those marvelously acted Downey vs. Duvall tête-à-têtes — and one memorably hilarious jury-selection scene — can’t be ignored. Prior to its theatrical release, The Judge screened at the Mill Valley Film Festival, and I got a chance to speak with Dobkin about his latest film.

SF Bay Guardian The film opens with quite a comedic scene, with Hank dressing down a fellow attorney in a courtroom men’s bathroom. While there are funny moments throughout, it’s not a comedy. Why did you decide to begin there?

David Dobkin I wanted to open the movie with some sort of unexpected little bang, and I also wanted to start with a character that was kind of the Robert that everyone loves in so many of his movies: the most flamboyant, fun, arrogant, sarcastic guy. Part of the design of the movie was, “What if that guy was a real guy?”, and then had to go through this real journey. What would it be when he strips himself down and gets put through a grinder? How does a guy like that fit into a real family? I think that’s part of what’s cool about the movie — he starts there, and he’s very much that guy throughout, but he does slowly peel the onion back. The layers and layers come out, and you get to see Downey in a different way.

SFBG I’m interested to hear how you approached characterizing a typical American small town. Though Hank hated living there — there’s the scene when he first drives back into town, and is moaning to himself, “This sucks!”, it’s actually an incredibly idyllic place.

DD I’m psyched that you caught that. These are the things that, as a geeky director, have in your head and you think they’ll work a certain way, and you pitch it to your producers. I said to this to Downey, too: The town is the other glimpse of Hank’s father. It’s about certain values and a certain time period. It’s a world that’s preserved in time, like our memories of being a child, or nostalgia. What’s interesting is when he comes back, it’s something that’s appealing to the audience, but he’s put off by it. It makes us curious about him, so you lean in because of that. And then you slowly discover that he was exiled. There was no way he and his father were going to be able to live under the same roof, and there’s something that makes you sad for him about that.

But at the end of the movie, without giving away the end, hopefully there’s a way he can reconcile that. I think we all wish we could get back home, to an imaginary home — I don’t think it’s really the home we think it was when we were kids. But the older we get, the more nostalgic we get when we think back on it. Our psyches lie to us to keep us connected.

SFBG One way you bring the past into the story is through the family’s home movies. What inspired you to use that as a narrative device, and how did you decide which scenes to depict in them?

DD We wanted to do it for real. We wanted to make it seem authentic, which meant hitting certain notes that you’d expect to see, but in our own way. Especially for [Hank’s younger brother,] Dale [Jeremy Strong]. The movies are centered around him, and it’s almost like he’s trying to put the family back together again. He’s trying to take these old image and reconstruct the stories, and he’s trying to work out what happened. He’s the innocent. We see the collateral damage of that family through his eyes of what’s happened between Robert Downey, Jr. and Robert Duvall’s characters. And the truth is, if there’s discord in a family on that level, everybody’s fucked up by it. Nobody can heal until that thing gets fixed. I think that there’s an unconscious part of you that roots for them to somehow work it out, so that the family can come together again. But we all have that. All our families are fucked up.

SFBG There’s that line, “This family is a fuckin’ Picasso painting.”

DD Yeah. That was Downey, just off the top of his head.

SFBG I enjoyed the bit in the screenplay about selecting jurors based on their bumper stickers. Who came up with that?

DD [Co-screenwriter] Bill Dubuque. He said to us, “I have an idea for a scene with the jury selection.” I was like, “What? Nobody wants to hang around for that. Get into the trial!” But he knew we were trying to find more comedy. You have to have some fun in a movie like this. We didn’t want to make a serious movie in that way. We knew there was a lot of drama in the film, but there’s a lot of humor because those were the [types of] movies that we love. We’d always talk about Rain Man (1988), or Terms of Endearment (1983), when Hollywood would make movies about people, but with movie stars. Which does not happen anymore for the most part. They happen here and there, but they’re certainly not on the agenda.

Aside from those ones in the 1980s, we all loved those ones from the ’70s, when movies were really about people. Kramer vs. Kramer (1979), Ordinary People (1980) — movies that were talking about cultural issues, like divorce and going to therapy, that people hadn’t worked out yet. The films were having the conversation with the audience at the same time.

The Judge is not an agenda movie, but healing your family and taking care of a parent that’s in trouble is something we’re seeing a lot more of. Certainly for me, I never imagined I was going to have to parent one of my parents. That was the impetus that created the story for this movie — this really difficult experience [in my own life].

SFBG I read that you got the main cast together beforehand for family bonding, or dysfunctional family bonding, as the case may be. Is that a technique you’ve used before, and what does it accomplish?

DD All my movies, I do a three-week rehearsal. I bring the actors in and we build their characters and kind of do a workshop. I never actually perform the scenes all the way — I don’t want to see an emotional scene be on its feet until we’re there on set. But we break it apart, we study it, we talk about it. We talk about our own experiences. I do exercises on back story. It’s kind of like Outward Bound.

By the time you’re done, everybody has had a shared history, even if it’s only a three-week history. We all get on the same page — I’m able to listen to them talk about stuff, or build things from improvisations into the movie, and everybody gets a chance to be in the room and have a connection that’s real. It’s a sign of commitment. It’s hard to do with big movie stars because their schedules are just really crazy busy, and sometimes it’s hard to do with big actors, someone like Robert Duvall, who is a legend, because they may not want to get down in the dirt and do that kind of work anymore. But for me, I think it informs the work deeply, and part of the reason why the performances in this movie are as powerful as they are is because these guys were all behaving as a family.