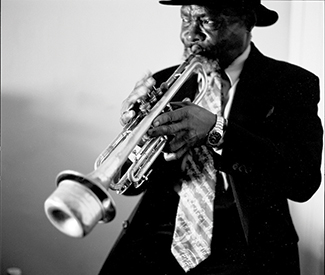 The Boogaloo is a dance, descended from the Twist but landing firmly between the Philly Dog and the Skate.

“I like to dance. Always did,” says Oscar Myers, who turns 70 next week, while demonstrating his moves in front of a whooping, sweating, grinning 1am crowd at San Francisco’s Boom Boom Room. Myers knows the Boogaloo because he was there when it happened, and because he plays the melange of funk, soul, jazz, and Latin music that make up its unique sound.

Myers, a trumpet player, percussionist, and singer, has been a Bay Area mainstay for decades, but if you wandered into any of his regular nights here or Madrone Art Bar, you might not immediately realize you were in the presence of a musical forefather.

His band, Steppin’, plays tunes by Lou Donaldson, Melvin Sparks, and Ivan “Boogaloo Joe” Jones, alongside classics by James Brown and Michael Jackson. The 30-somethings in Steppin’ are talented, but all eyes are usually on the man up front: It’s Myers who played with James Brown, Ray Charles, Charles Mingus, Lowell Fulson, and R&B icon Jimmy McCracklin. There aren’t many musicians of Myers’ era left — much less playing regular late-night gigs around San Francisco. (His next will be his 70th birthday party, at the Boom Boom Room this Friday, Oct. 10.)

No one ever asks for anything “half-assed.”

Born in Montego Bay, Jamaica, in 1944, Myers moved to Charleston, South Carolina as a kid. His father worked the graveyard shift at the city water pump station and dug actual graves during the day. His parents weren’t especially musical, but they had a piano, on which Myers began to pick out songs by ear. Through the family’s record player, he got to know the era’s swing greats: Benny Goodman, Cab Calloway, Duke Ellington, and McKinney’s Cotton Pickers. He picked up the trumpet as a teenager, which got him into the orchestra and marching band at North Carolina A&T, alongside classmate (and future saxophone legend) Maceo Parker.

Following college, he joined the military, landing in San Francisco after serving in Vietnam. He doesn’t talk about it much, but he was wounded in the Tet Offensive, and ended up in physical therapy at the Letterman Army Hospital in the Presidio. He ultimately decided to stay: “The Bay Area was humming,” says Myers, with an inimitable, throaty husk in his voice. “There was music coming from everywhere.”

His list of collaborators is an index to the Bay Area’s music history — “The Bishop” Norman Williams, Jackie Ivory, Julian Vaught, Bill Bell, Bill Summers, and Babatunde Lea — and his gigs map out its nearly forgotten musical nervous system: the jazz, funk, and R&B clubs that once hosted the area’s thriving scene.

By the ’90s, Myers was leading a band that included two former bandmates of James Brown: organist Louis Madison and saxophonist C.A. Carr. Madison — a member of the Famous Flames, who were unceremoniously fired by Brown after a gig in San Francisco in 1959, reportedly after asking to be paid fairly — is rumored to have penned such Brown hits as “I Feel Good,” “Try Me,” and “Please, Please, Please.” Sans Brown, the Flames stuck around the Bay for good.

“How many of y’all know who the Godfather of Soul is?”

In the early ’90s, Myers got a call from James Brown’s manager, saying Brown wanted to meet up with Madison and this new bandleader in San Francisco. Myers declined, citing their gig at Eli’s Mile High Club in Oakland that night. Since two of Brown’s alumni were in the band, Myers added, Brown should actually come to them. Sure enough, during the show, Brown showed up with his wife, and the band broke into “I Feel Good.” After “I’ll Go Crazy,” Brown rushed the stage to hug his old band-members.

Soon after, Brown invited Myers to sit in on trumpet when he played the West Coast. Myers did about eight gigs with Brown, a perfectionist who notoriously fined his musicians for mistakes.

“All that’s true,” says Myers, though he didn’t personally receive any penalties. “He’d go down to the front of the stage and be leaning and crying and singing and then he’d hold up his hand: $5.” Don’t miss a note, was the lesson. “And don’t be late either!”

“I’ve never seen so many dead people breathing in my life!”

It takes a lot to get away with chastising a crowd. “He can tell the audience to shut up and it’s ok, because he has the credibility to do it,” says organist Wil Blades, who’s been playing with Myers for over a decade, since Blades was 20. “Oscar has big ears and he knows how this music should sound, because he came up with it.”

Mentorship is important to Myers, who now lives with his wife off Alamo Square. “Nowadays, you don’t see that stuff happening, where the older cats let the younger ones come and play and test their knowledge,” says the bandleader. Go to any Myers gig, and you’ll see one or two young musicians trying to prove their worth. If Myers likes what he hears, they’ll receive a smile and a handshake at the end of the night.

That said: “If you can’t play I’m not going to let you get up there. If you’re bad, I’ll run your ass off stage.” He’s not kidding.

“He let me up there and gave me an old-school butt-whooping,” remembers Blades. “That’s how you really learn this music, to me. You don’t learn it in school.”

How does it feel to be playing on his 70th birthday? “I did it when I was 69!” says Myers with a laugh. “You’re blessed just to be here this long. You can wake up, open your eyes, wiggle your toes, everything’s working. Everything from here on out is gravy for me.”

Which might explain why, on a typical night, you’ll find him dancing spontaneously during a set break, even when the curtain is down and the audience can’t see a thing.