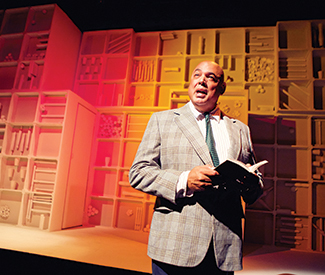 THEATER At the outset of The Late Wedding, actor Kathryn Zdan explains that we are about to be taken on “an anthropological tour of imagined tribes and their marriage customs.” She also explains that the play we’re watching is a play that we’re watching, and that a playwright has written it, under the spell of another author, Italian postmodernist Italo Calvino, whose playfully imaginative style in books like Invisible Cities and If on a winter’s night a traveler… unravels the standard narrative regime in favor of open-ended possibility and self-conscious reflection on art and consciousness. This strategy brought Calvino international acclaim 40 or 50 years ago. But Bay Area playwright Christopher Chen’s latest is too beguiled by its literary inspiration to get very far as a work of its own.

At some level, The Late Wedding wants to explore the nature of human communication and communion through a fourth-wall-scaling ensemble of six actors — alternately playing characters from made-up civilizations and swapping the Narrator hat to address the audience about their experience in the theater — and an offstage “playwright” who can’t keep his banal musings about groceries and whatnot from intruding into his own narrative.

The first of these couples (played in an initially amusing, offhand manner by Lawrence Radecker and Michael Anthony Torres) lounges around remembering the party of the night before, relieved to find they feel the same way about it. They then become extremely agitated, struggling to confirm the details of more distant shared memories on the vacation islands of Calaman — as if this agreed on map of memory were the only bridge between them. The same islands, as some unattainable ideal or some real place or both, come back later as a destination in an intergalactic space hop for another character (played by Zdan) who may be reuniting with her estranged wife (Lauren Spencer). Their estrangement followed Zdan’s character’s strict adherence to the marital customs of her society — namely, maximizing the anticipation and desire of romance by forestalling the wedding night indefinitely, and raising a family with someone else meanwhile. A third couple (played by Michele Leavy and Ogie Zulueta) receives a visit from a scholar (Radecker) intrigued by their view of marriage as a kind of living death. Interlarded with the marriages are lots of direct address, a wayward plot or two, and the intrusive personal thoughts of an increasingly distracted playwright.

For this Crowded Fire premiere, scenic designer Melpomene Katakalos conjures onstage an imposing all-white (later transparent) wall of open cubicles with sundry objects inside. It’s a mash-up of the grand vertical cities of Louise Nevelson’s monochromatic wall pieces and the private, idiosyncratic worlds of Joseph Cornell’s boxes, and it promises some intricate architecture, spanning the subjective and the social realms of reality. But the play only faintly delivers on that promise. It wouldn’t have mattered as much if the dialogue was more compelling, but it tends to strain in pursuit of novelty and humor. Artistic director Marissa Wolf, meanwhile, has her actors deliver their lines in a presentational manner that is fitfully effective at best at striking a rapport with the audience, while the couples mingle flat humor with saccharine sincerity as they limn the contours of their relationships.

Even a leap from fantastical anthropologies to distant space travel can’t save The Late Wedding from a sense of inertia. This might be because it owes too much to its source of inspiration. We’re told about Calvino right away, and Chen’s own imagination seems hobbled from that point on, more concerned with transposition than with pursuing ideas for their own sake. To make matters worse, the play’s meta-narrative and postmodern confusion are already overly familiar as a theatrical strategy, rather pre-postmodern, like ersatz Pirandello. The feigned concern for the audience over the odd non sequitur therefore feels misplaced, quaint, and vaguely patronizing. There may be potential for real mystery and meaning to emerge from the play’s artful dodging, but a way has to be cleared for it through all the pseudo-novelty and rigamarole.