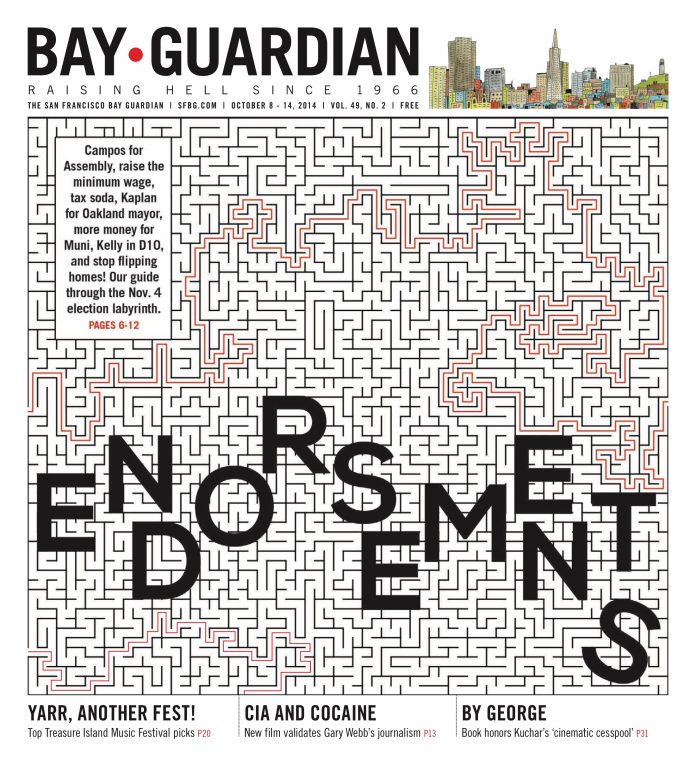 If you were among the estimated 750,000 people who poured into Golden Gate Park this past weekend for Hardly Strictly Blugrass, our raucous annual celebration of all things bluegrass(-ish) under a blazing sun, chances are you’re doing some serious rehydrating this week. Check our photos and review on the Noise blog at www.sfbg.com while you’re at it. GUARDIAN PHOTO OF RYAN ADAMS BY EMILY SELVIN

If the soda tax proponents brought a carbonated supersoaker to the November ballot showdown, the American Beverage Industry brought a soda tsunami. New campaign finance reports filed Monday, Oct. 6, show the soda industry gave $7.7 million dollars to shoot down the sugary beverage tax ballot proposition in San Francisco alone. That number is completely off the charts. “It makes your eyeballs pop,” Sup. Scott Wiener, co-author of the tax, told us. Local ballot races often top out in the hundreds of thousands of dollars, if that. This $7.7 million is like bringing an atom bomb to a pistol duel. But will the money, and its requisite commercials, billboards and “grassroots” organizers, hoodwink San Francisco?

Who says no one reads anymore? Litquake begs to differ, with a robust 15th edition that welcomes more than 850 (!) authors to its various venues. The literary festival kicks off Fri/10 with “Viva Fifteen,” a Quinceañera party, at Z Space, and it’s basically a choose-your-own-adventure from there: check out National Book Critics Award winner Nicholson Baker, Man Booker Prize finalist Emma Donoghue, a “Poetry World Series,” an event with comedian and podcast sensation Marc Maron, or the ever-popular Lit Crawl. Or do it all! Sleep is overrated … literature is not. Through Oct 18; www.litquake.org.

Mission street youth support organization At the Crossroads (www.atthecrossroads.org) reaches out to homeless young adults and provides much-needed services. But as a nonprofit, At the Crossroads needs some help too. That’s where the glorious power of SF nightlife steps in — or rather slides in backwards, drops a cardboard square, and does a headspin. The Dance SF with Grandmaster Flash (Sat/11, 9am-5pm, $25. Mighty, 119 Utah, SF. www.mighty119.com) is an all-day benefit dance-a-thon with the godfather of hip-hop DJs — the man who invented the turntable backspin and popularized scratching. Also on board for eight hours of dance floor mania: beloved SF party crews Afrolicious, Motown on Mondays, Non Stop Bhangra, and many more.

A crowd gathered in solidarity with Occupy Hong Kong in San Francisco’s Financial District Oct. 1. But at least one San Franciscan seemed confused by the message: Mayor Ed Lee told the Chronicle he wasn’t up to speed on the Hong Kong protests, commenting that “if they’re anything like Occupy San Francisco, you’re going to have to study it for a while to see what there are trying to say.” Meanwhile, Lee drew criticism for observing China’s National Day by raising the Chinese flag from his City Hall office, alongside delegates from the Chinese consulate. Maybe he was just too preoccupied with business deals involving Chinese investors to read up on the huge, historic pro-democracy movement.

Congrats to the local Bay Area indie artists at last weekend’s APE 2014 — the comics expo was so much artsy goodness. The Guardian went out and had a grand ol’ time, meeting Kelly Martin (creator of Doctor Lollipop, pictured), Katie Longua (creator of ROK), and Babs Tarr (who recently redesigned Batgirl to be less sexytimes and more practical). Also a hearty shoutout to the political cartoonists of Mission Mini-Comix, who had the best prices at APE, bar none: $1 for seven political cartoons raking Mission gentrifiers over the coals, and even taking City College’s accreditors to task. Lesson learned: The Bay Area has a great local comics lineage, so ditch the mainstream stuff and support local artists.

The second-citizens of the tech world, shuttle bus drivers, are now trying to unionize. Drivers of Loop Transportation, who mostly ferry Facebookers, are trying to join the Teamsters Union. They’re sick of their “split shifts,” mandating them to work mornings and the evenings with an extended break in-between. “You spend 16 hours a day — no time for family, no time for the kids,” Jimmy Maerina, a driver, told the New York Times. “When I leave home in the morning, my kids are sleeping, and when I get home at 9, they’re done with their homework.” Facebook lavishes meals, workout trainers, parties and more on their own employees, while their shuttle driver contractors get squat. Is there a dislike button for that?

If you were a fan of the “Bikes to Books” literary history map published in the Guardian last year, you won’t want to miss “Making History by Making Maps,” a follow-up event with creators Burrito Justice and Guardian contributor Nicole Gluckstern. Geographer and author Dick Walker (The Atlas of California: Mapping the Challenge of a New Era) joins the cycling enthusiasts for this Shaping San Francisco-hosted event Wed/8 at the Eric Quezada Center for Culture and Politics; there’s also a related bike tour exploring the city’s literary streets Sat/11. Bookmark Shaping SF’s informative website (www.shapingsf.org) for more public talks (and bike tours!) focusing on the city’s hidden history.

No one can deny the Freudian allure of putting your hands on a sleek, thrumming machine and slamming the flippers hard to get your ball in the hole (score!). But writer Jetta Rae’s upcoming, innovative lecture “The Tilted Hand: Sexism and Racism in Pinball” (Sun/12, 6pm-8pm, $15. Pacific Pinball Museum, 1510 Webster, Ala. www.pacificpinball.org) asks why the erotic power dynamic of pinball always has to be expressed so, er, insensitively — especially now that the pinball demographic has moved beyond adolescent boys. Rae “will deliver a crash course in intersectional oppression and show why and how unexamined, unchecked racism and sexism can halt pinball’s cultural comeback. There will also be lots of pictures of pinball machines!”