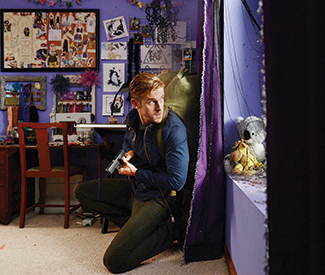 FILM On paper, it seems like an odd match: director Adam Wingard and writer Simon Barrett of indie horror hit You’re Next (2011), and British actor Dan Stevens, Downton Abbey‘s erstwhile heir. On screen, however, the trio’s The Guest is the boogeyman movie of the year, weaving a synth-scored tale of a small-town family startled by the sudden appearance of a soldier (Stevens) who claims to have known the son and brother they lost in Afghanistan. David is polite, handsome, and eager to assist in any way — whether it’s carrying kegs into a party with just-out-of-high-school Anna (Maika Monroe), or breaking faces on behalf of bullied teen Luke (Brendan Meyer).

You know what happens when something’s too good to be true, and the filmmakers know you know, enabling them to have a great time teasing out this trick-or-treat of a thriller, which is set during the cell phone era but references films like 1987’s The Stepfather and John Carpenter’s 1980s heyday (which, again, they know you know — and love, just like they do). I spoke with all three during a recent phone interview.

San Francisco Bay Guardian The Guest reminded me of another thriller that came out this year, Cold in July — both tell contemporary stories using 1980s retro style. What inspired that approach?

Simon Barrett After You’re Next, Adam and I wanted to think about what got us making movies in the first place. All three of us came of cinematic awareness during the 1980s, so a lot of the movies that inspired us were genre films of the mid-to-late ’80s. We wanted to do something that had that same fun spirit and aesthetic, but we didn’t just want to do an homage or an imitation, because that’s really easy and lazy. It was about taking that same tone those movies had, and doing something original with it. That was our goal from the very beginning, when Adam started talking about The Terminator (1984) and Halloween (1978).

Adam Wingard I read an article recently about how the most homaged filmmaker of the year is John Carpenter. There’s this weird zeitgeist of filmmakers who are inspired by Carpenter and other ’80s filmmakers. All of us making these movies are around the same age, and we all grew up on movies like Big Trouble in Little China (1986). It seems like that’s what’s in the air.

SB They Live (1988) is one we’ve referenced quite a bit — the humor in that film is so extraordinarily innovative and insane. There’s never any overt jokes, but there’s a fight scene in an alley that keeps going and going, until it becomes hysterical. That’s the humor that we were influenced by and respond to: letting something become ridiculous, and calling attention to the ridiculousness, but still taking your story and characters seriously. Carpenter just nailed that and I don’t think he gets enough credit for it.

SFBG Dan, were you a fan of horror before making The Guest?

Dan Stevens Adam and Simon are far more steeped in that specific genre than I am, but I certainly grew up on a lot of cult 1980s and 1990s American horror films. The Halloween films were huge in the UK. The action thriller genre was also massive, and something we were kind of baptized with in Britain.

AW It’s interesting how these cult 1980s genre films are, pretty much worldwide, a good connecting point. When we first talked, Dan and I had a very easy conversation, because we had those through lines. Beyond that, we both connected on understanding the sense of humor in Simon’s script, and realized we should be working together.

SFBG The soundtrack — which includes Sisters of Mercy, Front 242, and Love and Rockets — plays a huge role in The Guest. What motivated your musical choices?

AW Growing up in Alabama, I knew these pot dealers who were super gothed out. I always thought that was interesting, that even in the smallest towns there are still these weird subcultures. Through people like that I became aware of bands like Death in June and Front 242. I always thought that would be an interesting thing to bring into a movie, because I hadn’t seen somebody take a realistic approach to goth sensibilities.

I had a couple of songs in mind that I thought would be good for the movie, but I didn’t want to just make a film that had a bunch of music that I thought was cool. If it’s gonna be in there, it’s got to be story-oriented and character-motivated. I knew, also, that this wasn’t a straightforward horror film, but that I wanted it to take place during Halloween. So the approach to horror in The Guest isn’t necessarily in terms of it trying to be scary. It was more taking that goth approach to it in general, which is like having fun with the macabre and that type of energy. It’s more like fun-scary imagery than it is actually horrifying. 2