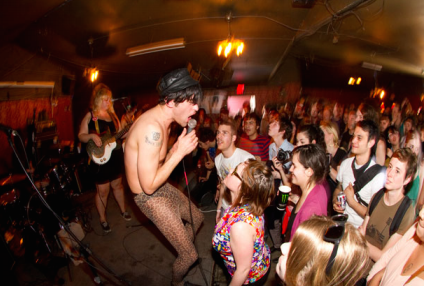 I can already envision the sound of Shannon Shaw‘s voice singing Metallica’s “Enter Sandman,” and it’s music to my ears. The James Hetfield-penned classic is the stuff of nightmares, and with “Rocktober” officially here, the timing is right for the return of the Total Trash Halloween Bash.

Who knew Shannon and The Clams were such metal fans? Or are they? Maybe it’s irony, but either way — you won’t want to miss this annual throwdown of shenanigans, in which your favorite Bay Area bands (and a few from beyond) get all costumed up as other, perhaps more famous rockers from decades past.

This year Total Trash and 1-2-3-4 Go! Records are keeping their co-production in the East Bay for the holiday weekend for two nights of rock n’ roll debauchery. On Friday, Oct. 31, Seth Bogart — better known as Hunx — will slip on his fangs (suitable for sucking) to host and perform as Gayracula. I expect the song “I Vant To Suck Your Cock” will get some stage time; after all, it was basically written for Halloween.

Sleazy horror flicks will project on the screen for the party with a costume contest at Leo’s Music Club on Telegraph Ave. for night No. 1, but the killer lineup doesn’t end there. Yogurt Brain might be on to something with this year’s attempt to upstage their performance last year as Weezer by doing another seminal ’90s act — Smashing Pumpkins. I’m wondering if a bald cap will be employed, or if this will be pre-bald-by-choice Billy Corgan? Pookie and The Poodlez does the Donnas and Cumstain will be Sleezer (another Weezer cover band?).

SF’s legendary Phantom Surfers highlight night No. 2 at Eli’s Mile High Club on Saturday. Those guys always seem prepared for Halloween with their masks, so I think they get a pass on having to dress anyone else.

These shows are always tons of fun and if the Bay Area can come together on one thing, it’s that Halloween rules. Grab a wig and get your tickets before it’s too late.