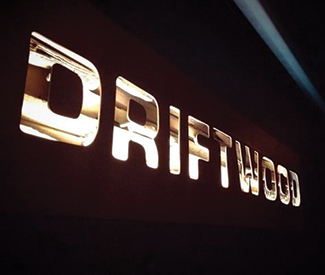 THE WEEKNIGHTER “It’s all fun and games and whippings until the end when everyone is really drunk. Then it’s just a bunch of wasted people rubbing their penises on things. That’s when I go inside and lock my door.” I was telling this to the bartender and a couple people sitting next to me. We were talking about the Folsom Street Fair.

“Yeah,” the woman on my left replied, “that’s when we got real busy actually, right when the fair started to close down.” She bartends at the Cat Club, which, along with Driftwood (1225 Folsom, SF. www.driftwoodbarsf.com), and my apartment, are all on Folsom Street. Just then “No Diggity” came on over the speakers and we each bobbed to the music in our own way. We were hanging out doing what bartenders do, drinking and talking about the other places we’ve worked and who we know in common. “I’m actually buying all the drinks for this guy tonight,” the lady said, pointing to the dude next to her.

He responded, “Yeah, I was mugged at gunpoint the other night, over in the Lower Haight. They got my wallet and my phone. Luckily they caught the bastards since I ran into someone right after and had them call the cops and tell them the license plate number.”

During the Folsom Street Fair a bunch of us put chairs on the sidewalk and hung out all afternoon watching the spectacle. At one point my friend Lauryn said, “It’s days like this that remind me why I love San Francisco. If this kind of fuckery can still happen, maybe the city isn’t dead after all.” For some reason, the guy telling me about his mugging reminded me of this. He was a bartender, not a startup bro, but still it made me think about how all these people who view San Francisco as a tech utopia seem to forget this is a real-ass city, where nasty things happen. Don’t get me wrong, nobody deserves to be mugged, and certainly not this nice guy I was having a drink with at the bar, but in weird way, hearing about these kinds of shitty things also reminded me that SF isn’t some bland bubble yet. If the “let the free market decide” people had complete reign over this city, eventually there wouldn’t be any muggings at all because the only people left here would be rich. But also, there may not be an entire day of people in leather beating and fellating each other in the streets.

We chatted a little more and had a shot before the two sitting by me went over to Death Guild. That just left me and the bartender. “I moved here three years ago with only $500 to my name,” he told me, “I couldn’t have picked a worse time to come to SF. It took me forever to find a place to live, so I slept on couches and worked a million hours and eventually moved into an SRO until I could afford to move into an apartment. But I did it all because I love this city and I knew I needed to be here.”

Eventually three guys came into the bar. They were all from other countries and were living in Sonoma doing some impressive vintners internship. They finally had a night off and were blowing off steam. After some drinks, the Aussie guy asked where they could meet some girls around there. I thought about it, “It’s a Monday night guys, and you’re in a neighborhood of mostly gay bars.” I told them.

“There’s the EndUp,” the barkeep said. And I laughed out loud. “No really,” he responded, “attractive straight girls actually go there now.” To which I thought, maybe the city is dead after all.