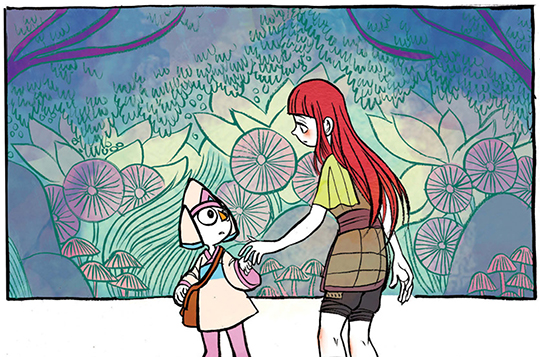 LIT Like the Internet itself, Cory Doctorow seems to be everywhere all at once.

Novelist, essayist, activist, and co-founder of the influential website Boing Boing, the Canadian-born, London-based writer is having a particularly peripatetic autumn, traveling from the UK to various locations throughout Europe and North America.

In Real Life is based on “Anda’s Game,” a 2002 Doctorow short story. While living in the Bay Area in the mid-1990s, Doctorow heard programmers and other techies expressing their anxieties about the trend toward outsourcing jobs to India. Having grown up in Toronto, not far from where the North American auto industry was headquartered, Doctorow was reminded how, in the years after NAFTA, car workers who were losing their jobs felt great animosity toward Mexican workers.

“Which I always thought was tremendously misplaced,” he says. “I mean, it wasn’t Mexican workers who moved the jobs to Mexico; it was the bosses living right around the corner.”

Some of those memories informed “Anda’s Game.” Its comics adaptation, In Real Life, follows a high school student as she learns to navigate Coarsegold Online, a massively multiplayer role-playing game. Anda loves being a hero and a role model in the digital word, but when she befriends a poor Chinese kid who works incredibly long hours on behalf of wealthier players from developed countries, she begins to understand the inequities of the system. When she pushes her new friend to stand up for his rights, Anda can’t foresee the consequences of her actions.

Wang, the author-illustrator of the graphic novel Koko Be Good, says she was introduced to Doctorow by First Second. Her adaptation of his original work required some back-and-forth by e-mail, and she ended up scrapping approximately half the book at one point and starting over.

“We did this all online,” she says. “So this will be the first time I’m meeting him, when he comes to do this book tour.”

Of collaborating with Doctorow, Wang says, “The biggest challenge for me was working with someone so [well-known]. I wanted to capture Cory’s vision, even though I was doing all of the drawing and writing, to produce something he could be proud of.”

In Real Life works well for both teen and adult readers, making its political points amid exciting depictions of digital battles. Wang’s manga-influenced style complements Doctorow’s subject and theme while finding a colorful vitality all its own.

“Jen did all the hard work and such a great job,” Doctorow says. “All the stuff that is less than salutatory in there I’m sure is my fault. Everything that is brilliant is hers.”

A former European director of the Electronic Frontier Foundation, Doctorow plays an entirely different game with his latest book-length nonfiction project, Information Doesn’t Want to Be Free. The volume explores the uses and abuses of copyright and presents a manifesto for creators of all stripes who want to succeed in the 21st century.

“It’s the latest incarnation of things I’ve taken a lot of runs at over the years,” he says. “I’ve been involved in information policy for a long time. I’ve written lots of articles and have a couple of collections of essays on the subject, but I really wanted to do something book-like and substantial.”

The inspiration for the book came in the wake of a 2009 O’Reilly Tools of Change Conference. Doctorow spoke at the event about how video game companies, the music industry, and film studios were all trying, through digital rights management and other strategies, to limit the public’s ability to share the information and entertainment they enjoyed. He proposed the following law: Any Time Someone Puts a Lock on Something That Belongs To You and Won’t Give You the Key, That Lock Isn’t There For Your Benefit.

After the speech, Doctorow chatted with his agent, Russell Galen, who also represented Arthur C. Clarke, famous not only for 2001: A Space Odyssey but for his Three Laws of science fiction. Galen told Doctorow, “If there’s one thing I’ve learned, it’s that you can’t just have one law. You have to have three.”

Doctorow was able to complete the triad, and the new rules are part of his new book. They deal with the methods of capturing and holding attention on the Internet and what copyright means (Information Age: Fame Won’t Make You Rich, But You Can’t Get Paid Without It; and Information Doesn’t Want to Be Free, People Do).

During his appearance with Pescovitz at the JCCSF, Doctorow is likely to address questions from the book, such as whether lesser-known artists can flourish on the Internet and how giant entertainment companies can avoid alienating their customers. In both In Real Life and Information, Doctorow pays much attention to how the present-day Internet, with its ability to connect people while also spying on them, can be used for both liberation and suppression.

“Regardless of our own individual fortunes or needs, our primary allegiance needs to be to a free and fair society,” Doctorow insists. “The arts should always be on the side of freedom and fairness and free speech.” 2

INFORMATION DOESN’T WANT TO BE FREE