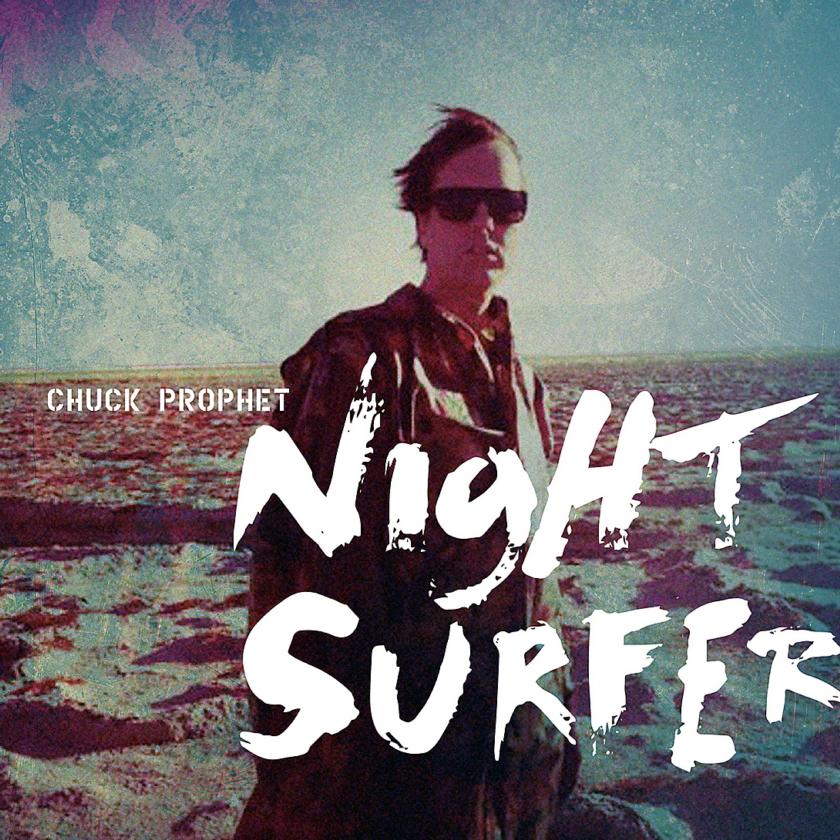 Chuck Prophet’s been around the San Francisco music scene long enough to make a name for himself in a few regards: He can be counted on for rock ‘n’ roll story-songs, for startlingly visual writing. The influence of Lou Reed shines plainly through his somewhat disaffected drawl. And more often than not his adopted hometown of San Francisco (he’s lived here for nearly 35 years) is the central subject of his musical mash notes, as in 2012’s elegy for the city, Temple Beautiful, with its lamentations about long-dead rock clubs and Halloweens in the Castro.

Night Surfer (Yep Roc), out last week, is a different kind of a beast. Where Temple looked to the city’s past, Night Surfer takes on what the future may hold, with song titles like “Countrified Inner City Technological Man.” Where Temple was sparse, emotive, even delicate in places, the new record is a Prophet-rocking-the-fuck-out record, in which even the most weary-sounding songs of the road come with a “damn I’ve had good time” kind of wink. There are shades of Tom Petty at his most fun, an aura of what Roxy Music might’ve sounded like if they were from California, and swells of strings lending weight to choruses — not to mention huge guitar hooks courtesy of REM’s Peter Buck anchoring many a track. This is a record to blast in a car, or to see performed live in a very big room.

Luckily, Prophet’s playing the very big room known as Golden Gate Park this weekend at Hardly Strictly Bluegrass (at 2:45pm on Sun/5, at the Rooster Stage) before heading out on the road. If that weren’t enough — or for those of you a slightly more intimate Chuck Prophet experience, he and his band the Mission Express (which includes his wife, Stephanie) will be holding court at the Make Out Room the previous two nights for early shows (Fri/3 and Sat/4, both at 7:30pm). Ahead of his busy weekend, we checked in by phone to talk about the album, the city, and that excellent Scott Wiener takedown via Facebook about a month ago.

SF Bay Guardian I read somewhere that you set out for this to be your kind of post-apocalyptic, future-themed record. What pointed you in that direction?

Chuck Prophet Yeah, at one point there was a dystopian thread that was running through it, though I don’t really consider it a dystopian record now. But that was enough of a thread to get me into writing, going ‘Oh, that’d be fun.’ I’m not totally cranky about the future or technology, if that’s what it comes off as — the record cover itself was taken on an iPhone, I recorded the demos on a laptop.

But in another way I think if certain things happening now were in a Cormac McCarthy novel, people would be asking him “How could you have written this, how could you write things so violently?” I mean a year ago when I was writing htis record I didn’t know, I couldn’t have imagined that there would be beheadings on TV. I was touring Mexico, which in places has its own kind of horror show going on…and then there’s my own neighborhood, how the Castro is slowly turning into the strip mall. Wondering, do we need another Jamba Juice or Chipotle here? So that was the theme to get excited about, just to get into it.

SFBG On the record, though, you don’t sound overly critical or angry at the future you’re seeing. The music alone is mostly very upbeat.

CP It’s not an angry record; I think it’s an anxious record. At this point in time it’s 2014, and I don’t want to just be another asshole with a TV, commenting, you know. I like pulling the camera back and taking things in on a little more on social level, picking apart how things work. I’m much less cynical than I was when I was younger. I feel lucky in many ways.

CP When the record started, one of the touchstones was a lot of glam rock, and also sort of garage rock nuggets from a certain era in Holland and England…Gary Glitter, Thin Lizzy, and all that kind of grandiose 70s guitar music. All of it is kind of a reaction to what I did befoe: Temple Beautiful was really stripped down, with one electric guitar in one speaker; even the cover was in black and white. And the focus was on the words. This was a chance to have a little more fun musically, to get a little arena rock, especially on tour.

We made the record here in SF, and then decided to go a little more grandiose with those beautiful string arrangements, so we did that in Nashville with Nashville players. And then we mixed it in upstate New York, at this barn where they worked on the first couple Radiohead records, actually. So that was great, mixing in a barn, peeing outside and whatnot.

CP I’ve known Peter for years, thoguh he’s someone I may not see very often. He has a festival every year in January in Baja, and last time I was there he said, “Hey man, I’m just waitng for an invitation to come play on a record.” So he came down from Portland for it, and that was great — honestly, we had three guitar players playing at the same time, and I think he just put everybody on their best behavior. And he’s also just a hook machine. So that was a thrill.

SFBG So many songs on this one seem really cinematic, with these full characters. How do they take place in your head?

CP With songs like “Truth Will Out (The Ballad of Melissa and Remy),” that’s probably a result of reading way too much true crime than would be good for anybody. It’s funny because I got my mom a Kindle a couple years ago, and one point I realized, ‘I can look at this and see what kind of books my mom reads.’ But then maybe I don’t want to know — Fifty Shades of Grey, or whatnot. So I started scrolling through there, and it was all theology and true crime. Which makes sense for me in a lot of ways.

Melissa and Remy, in particular, came out of the Amanda Knox trials. I wrote it with my friend Kurt Lipschutz, and at some point after I got into the song I realized it doesn’t really go anywhere, nothing gets tied up in the end at all. But then I thought, neither does The Maltese Falcon, neither does The Big Lebowski. Was she kidnapped? Did the nihilist do it? It doesn’t matter.

SFBG How are you feeling about the music scene here as of late? We know how you feel about development, and Sup. Scott Weiner, to a certain extent.

CP In terms of the music scene, to me, it still seems like a vibrant town. I feel like there’s a lot going on — there are always shows at the Hemlock and Bottom of the Hill with bands that are getting started, doing interesting things. I think there are people making records in their closet, and they’ve got five roommates, and they’re  doing it for excitement of doing it.

When it comes to how the city’s changing, I’m more concerned about honoring the diversity and open-mindedness that this city is supposed to represent. I’ve seen my neighborhood change, and a lot of it is for the better. But I don’t want to see people rounded up and chased down the street with pitchforks because they’re “marginal characters.” Every time they change condo status on a building, it means they can’t enforce rent control, and I just want to slow down the tsunami, have us think it through a little bit before we drive people out of here.

There are always going to be competing points of view about how the city is, and I just don’t share Scott Wiener’s. He loves condos, he’s crazy for condos. [The efforts to shut down the needle exchange in Duboce Triangle and the Chronicle column about the neighborhood] made me think, there are probably people here who don’t even remember AIDS. I mean, that needle exchange saves lives, and I think there are people who don’t understand that, people who really do think that it’s all about owning property and making money, and I just don’t really share that vision.

I was thinking about asking him to debate me — where I’d let him talk first and then I say “I don’t really agree with you” — but I’m one of those guys where, even if I’m right, I’d probably lose the debate. We’ve been thinking about other things, like a dunking booth, a pie throwing thing, maybe at the Make Out Room. If we could raise money for the needle exchange by doing it, I’d let him throw a pie at my face. Absolutely.

SFBG You’re not feeling entirely negative about the future of San Francisco, though.

CP Not at all. The thing I’ve been thinking lately is, you know, the future might save us. But we have to get there first.