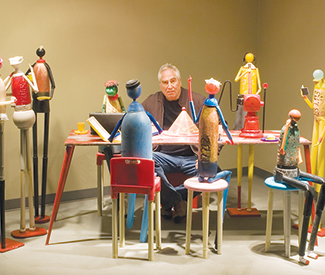 Robert A. Campos and Donna LoCicero’s 3 Still Standing charts the careers of veteran San Francisco comedians Will Durst, Johnny Steele, and Larry “Bubbles” Brown. All were integral members of SF’s booming stand-up scene in the 1980s, and seemed destined to emulate breakout stars Robin Williams and Dana Carvey (both are interviewed; the film is dedicated to Williams). The giddy energy contained in footage from the Holy City Zoo, where Williams got his start, is undeniable. For a hot minute — Durst won a prestigious comedy contest; Brown brought his self-deprecating digs to The Late Show with David Letterman; Steele scored a big-shot agent — fame, or at least lucrative TV and movie deals, seemed inevitable.

The doc jumps ahead 20 years without ever pinning down why superstardom proved elusive, but there were some obvious factors: The comedy-club scene cooled, and most of the big names moved to Los Angeles’ greener pastures. And one gets the sense that none of the men longed to play a goofy neighbor on some generic sitcom; the paycheck would’ve been nice, sure, but to hear them discuss the joys of stand-up suggests they’ve come to embrace living the dream on a slightly smaller scale. The crisply-edited 3 Still Standing benefits enormously from the fact that everyone interviewed is hilarious — with responses spiraling into riffs — though it might’ve been interesting, as part of the film’s then-and-now structure, to look at SF’s current indie comedy scene, which is livelier than it’s been in years thanks to venues like Lost Weekend’s Cinecave. (Fodder for a future doc, perhaps?) Along with a trio of screenings, 3 Still Standing‘s festivities include a Sat/4 performance with Durst, Brown, and Steele, plus Sun/5’s Robin Williams: A Celebration, a free showing of clips culled from the late great’s many MVFF appearances.

As it happens, Durst turns up in another MVFF doc about an SF artist whose career path has been highly unpredictable. Settling into Plastic Man: The Artful Life of Jerry Ross Barrish knowing nothing about its subject, the viewer might be forgiven for thinking that William Farley’s doc (produced by MVFF programmer Janis Plotkin) is about an elderly sculptor who delights in crafting figures of people and animals from found objects made of plastic.

And it is — but Jerry Ross Barrish also happens to be the son of a professional boxer (who had Mafia connections). He’s been a bail bondsman since 1961 (a staunch progressive, he bailed out Berkeley’s free speech protesters in ’64, San Francisco State rioters in ’68, and multiple Black Panthers). He’s a San Francisco Art Institute-trained filmmaker who acted in a 1974 George Kuchar short before making his first feature, 1982’s Dan’s Motel, which landed him a spot in New York’s prestigious “New Directors/New Films” series. (His final film, 1989’s Shuttlecock, co-starred Durst.) Oh, and there was also that DAAD award he won in 1986, which enabled him to live in Berlin for a time and play a director in Wim Wenders’ Wings of Desire (1987).

It’s an incredible life story, and Plastic Man — buoyed by Beth Custer’s dynamic score — manages to cram in all of the above, while keeping its focus trained on Barrish’s present artistic passions. He has trouble selling his work or getting gallery representation because “the plastic is holding him back,” according to one art-world observer. In other words, trash ain’t hip. But his work is whimsical and cleverly crafted, and it makes people happy — enough that Barrish scores a huge project at the end of the film that locals just might recognize.

German director Doris Dörrie (2002’s Enlightenment Guaranteed, 2007’s How to Cook Your Life) travels to Mexico City for the meticulously observed Que Caramba es la Vida, about female musicians who’ve added their talents to the male-dominated mariachi world. We meet three segments of this rarefied group. First, there’s a single mother who frequents gritty mariachi hotspot Plaza Garibaldi. “It’s horrible being surrounded by men,” she bitterly reports, but as soon as she croons her first staggeringly soulful note, it’s apparent why she’s pursued such a difficult line of work. Mariachi is less fraught for the other subjects, whose outlook on the culture’s sexism is mitigated by the fact that they perform in groups that are extensions of their own families. There are the housewives who comprise Las Estrellas de Jalisco, singing melodramatic tunes at birthday parties or — in Que Caramba‘s most moving sequence — during a Day of the Dead memorial. Most delightfully, there are the “still standing” members of Mexico’s first all-female mariachi troupe, 50 years on but still full of energy and rousing vocals.

The final film in this gang of four is presented as part of a tribute to its maker, Chuck Workman, the editing wizard behind those rapid-fire montages that pop up on Oscar telecasts. In Magician, Workman takes on Orson Welles, whose 1941 Citizen Kane is often called the greatest film ever made — but who suffered a subsequent career of studio interference, budgetary woes, and general creative frustration. “He was the patron saint of indie filmmaking,” Richard Linklater asserts, a theory amply supported by this essential primer of Welles film and interview footage, expertly stitched together with Workman’s trademark flow. *