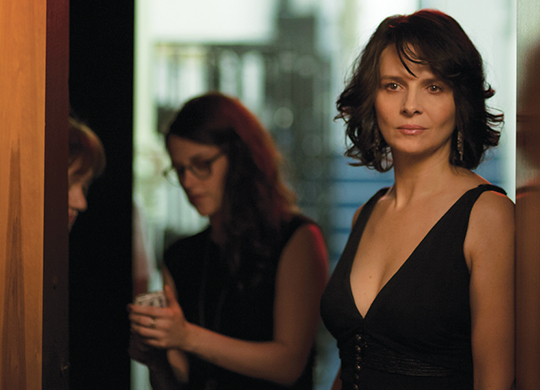 Clouds of Sils Maria (Olivier Assayas, US/France/Switzerland/Germany) A cunning backstage drama occupying the middle ground between Olivier Assayas’ naturalistic dramas and reality-bending puzzles, Clouds of Sils Maria is set in the Swiss Alps and more nearly in the charged intimacy between an aging actress (Juliette Binoche) and her young assistant (Kristen Stewart). The grand dame has been cast in the same play in which she made her name decades earlier, only now she’s playing the older half of a Sapphic duo. “The play’s the thing,” and as actress and assistant rehearse lines they are simultaneously testing the bounds of their shared privacy. Further complicating things, Assayas’s brash characterization of the young starlet (Chloë Grace Moretz) cast opposite Binoche in the play invariably recalls Stewart’s own tabloid trials; like any hall of mirrors, entering Clouds of Sils Maria is much simpler than finding your way out. Assayas certainly isn’t the first filmmaker to examine slippages between actor and role, and yet he seems uniquely sensitive to rendering performance as simultaneously being a matter of artifice and absorption — the fact that it’s never entirely one thing or the other is what keeps things interesting. Fri/3, 8:45pm, Sequoia; Mon/6, 1pm, Smith Rafael. (Max Goldberg)

Dracula vs. Frankenstein (Al Adamson, US, 1971) MVFF had the bright idea this year of inviting Metallica to be its artists-in-residence, with each of the four members selecting a new or revival feature for the program. The most eccentric choice by far is guitarist and diehard horror fan Kirk Hammett’s. Drive-in schlock king Al Adamson’s 1971 cult classic is a triumph of lurid incoherence starring genre veterans Lon Chaney Jr. and J. Carrol Naish (both in their last film appearances), the director’s busty peroxided wife, Regina Campbell, Russ Tamblyn of 1961’s West Side Story (and Adamson’s 1969 biker epic Satan’s Sadists), and as Count Dracula, one Zandor Vorkov — aka Roger Engel, a goateed stockbroker who got the part because the filmmakers couldn’t afford forking out $1,200 for their first choice, John Carradine. Cobbled together from stock footage, a prior abandoned feature, and whatever trendy ideas came to mind (LSD, biker gangs, etc.), Dracula vs. Frankenstein is the ultimate exploitation-movie example of make-do disorder so profound it achieves a sort of surrealist genius. Fri/3, 10pm, Smith Rafael. (Dennis Harvey)

Imperial Dreams (Malik Vitthal, US) Focused on survival rather than violence, Malik Vitthal’s accomplished first feature offers a strong riposte to those who dismiss crime in African American communities as some kind of pervasive racial characteristic. Released from a prison stint on an assault charge, Bambi (John Boyega) wants nothing more than to keep his nose clean and reconnect with his four-year-old son (played by twins Ethan and Justin Coach). The latter has been raised — if you can call it that — by Bambi’s strung-out mother (Kellita Smith) and drug-dealing uncle (Glenn Plummer); the boy’s own mother (Keke Palmer) is still stuck in prison herself on an unrelated charge. It’s no healthy environment for a kid, or an adult either, since the uncle keeps trying to force Bambi back into illegal doings. Our protagonist can’t get a job without a driver’s license; can’t get a license without paying the back child support his imprisoned ex didn’t even file for; as a parolee, can’t move into government housing with his brother (Rotimi Akinosho); and can’t seem to make a move without local cops suspecting the worst of him. This low-key, Watts-set drama is sobering but not hopeless, and the tenderness between father and son never feels like a sentimental ploy. Sat/4, 5:30pm, Lark; Sun/5, 2pm and Oct 8, 11:30am, Smith Rafael. (Harvey)

Diplomacy (Volker Schlöndorff, France) Based on Cyril Gely’s play — itself inspired by real-life events — this drama from Volker Schlöndorff (1979’s The Tin Drum) is set during the waning days of World War II and stars the actors who originated the stage roles: Niels Arestrup as weary German military governor von Choltitz, and André Dussollier as crafty Swedish consul-general Nordling. Diplomacy puts a tighter focus on chaotic Paris, circa August 1944, than previous works (like 1966’s similarly-themed Is Paris Burning?), with most of the action confined to a hotel suite as the men discuss von Choltitz’ orders, handed down from a spiteful Hitler, to blow up Paris as the Allies loom. Nordling’s negotiating skills are already known by history, but how he got there, as imagined here, makes for tense, tightly-scripted and -acted viewing. Sat/4, 8pm, Sequoia; Oct. 8, 3:30pm, Smith Rafael. (Cheryl Eddy)

Charlie’s Country (Rolf de Heer, Australia, 2013) David Gulpilil memorably made his film debut as the nameless aboriginal youth whose ability to live off the land in harsh Outback terrain saves two lost British children in Nicolas Roeg’s 1971 Walkabout. Forty-three years later he’s an embittered hostage to “civilization” yearning for that near-extinct way of life. Living on a reservation in northern Australia, chafing under the regulations of well-intentioned government overseers (or “thieving white bastards,” as he calls them), he tries to regain some sense of independence and harmony with nature by hunting — only to have his weapons confiscated. Peers who remember traditional ways are dying out or being hauled off to urban hospitals where they feel completely alienated. This latest from ever-idiosyncratic Aussie director Rolf de Heer (2006’s Ten Canoes, 1993’s Bad Boy Bubby) is one of his more conceptually simple efforts, sans elements of fantasy, black humor, or outrageousness. But it’s all the more poignant for its clear-eyed purity of intent. Sun/5, 7:45pm, Lark; Oct. 8, noon, Sequoia. (Harvey)

Gett: The Trial of Viviane Amsalem (Ronit Elkabetz and Shlomi Elkabetz, Israel/France/Germany) Ever felt trapped in a relationship? Odds are what you went through was nothing compared to the maximum-security imprisonment suffered by the titular protagonist in siblings Ronit and Shlomi Elkabetz’s Israeli drama. The former plays a middle-aged woman who was married off at age 15, and three decades of incompatibility later has decided the only solution is divorce. (By this point she’s already lived separately with most of their children for several years, supporting them with her own work.) But that can only be granted by a Rabbinical Court whose three members seem to see almost no reason why man should put asunder what God purportedly joined together in matrimonial contract. Seemingly out of sheer spite, the strictly religious (and humorless) husband played by Simon Abkarian further drags the process out for months, even years by refusing to cooperate when he doesn’t flat-out refuse to show up for mandated court sessions. Set entirely in the plain courtroom, this Israeli Oscar submission is claustrophobic both physically and psychologically — the strangling sensation of being in a situation our heroine’s culture and laws won’t permit escape from is excruciating at times. Mon/6, 7:30pm, Sequoia; Oct. 8, 6pm, Smith Rafael. (Harvey)

What We Do in the Shadows (Jermaine Clement and Taika Waititi, US/New Zealand) Before you groan “Oh no, not another mockumentary horror spoof,” be informed that this is THE mockumentary horror spoof, rendering all other past and prospective ones pretty well unnecessary. Vijago (Taika Waititi) is our 379-year-old principal guide as a film crew invades the decrepit Wellington, New Zealand, home he shares with three other undead bloodsuckers: Callow newbie Deacon (Jonathan Brugh), who refuses to do his assigned domestic chores; medieval Transylvanian warlord Vladislav (Jermaine Clement), still “a bit of a perv” torture-wise; and Nosferatu-looking mute Petyr (Ben Fransham), who’s scarier than the rest of them combined. When the latter recklessly “turns” local layabout Nick (Cori Gonzalez-Macuer), his loose lips — really, you don’t want to go around telling every pub acquaintance “I’m a vampire!” when you really are — threaten this fragile commune of murderous immortals. Though it loses steam a bit toward the end, Shadows is pretty hilarious for the most part, with its determined de-romanticizing of vampire clichés from Bram Stoker to Twilight. Tue/7, 7:45pm, and Oct. 9, 4pm, Smith Rafael. (Harvey)

The Theory of Everything (James Marsh, UK/US) It’s instant attraction when Stephen Hawking (Eddie Redmayne) meets Jane Wilde (Felicity Jones), though a dark cloud passes over the sweet romance between the Cambridge students when Stephen learns he has motor neuron disease. The odds are against them, but they get married anyway; as Stephen’s fragile condition worsens, his fame as a brilliant physicist grows. Though The Theory of Everything suffers from biopic syndrome (events are simplified for dramatic convenience, etc.), director James Marsh (2008’s Man on Wire), working from Jane Hawking’s memoir, does offer an intimate look at an extraordinary marriage that ultimately failed because of utterly ordinary, ultimately amicable reasons. In the end, the performances are far more memorable than the movie itself, with Redmayne’s astonishingly controlled physical performance matched scene for scene by Jones’ wide-rangingly emotional one. Oct. 9, 7pm, Smith Rafael. (Eddy)

In Order of Disappearance (Hans Petter Moland, Norway/Sweden/Denmark) Stellan Skarsgård makes like Liam Neeson in this bloody yet droll revenge saga. His unfortunately named Nils Dickman is a Swedish émigré living in a remote Norwegian community, working as a snow plowman. When their only son is kidnapped and killed — the innocent victim of a co-worker’s stupid plan to steal cocaine from major-league drug traffickers — his wife bitterly assumes he must have been the hapless addict that circumstances paint him as. But Nils refuses to accept that explanation, his own dogged investigations (and heavy fist) soon exposing a complex web of goons responsible, most notably rageaholic vegan racist villain Ole (Pal Sverre Hagen). He triggers full-scale war between local and Serbian crime factions to eliminate those few perps he doesn’t off himself — an ever-rising body count marked by onscreen titles commemorating each latest casualty. Hans Petter Moland’s film has been compared to Tarantino, and indeed there are similarities, but the frozen-north setting and bone-dry humor are Scandinavian as can be. Oct. 10, 5:45pm, Smith Rafael; Oct 12, 2:45, Sequoia. (Harvey)