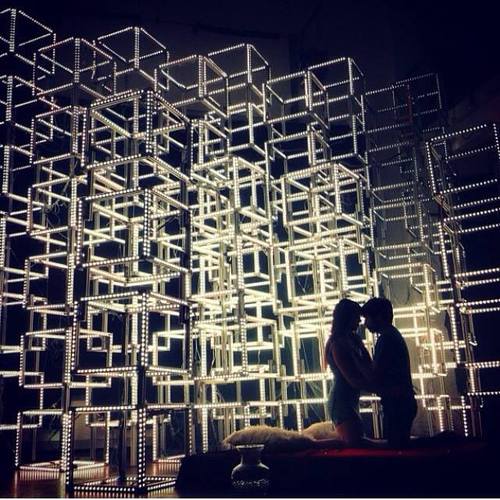 Because nothing showcases the breadth of music being made in the Bay Area better than some chilled-out electro R&B followed by a driving blues-rock sprint of a song: Here are the latest music videos from local faves Cathedrals and the Stone Foxes.

The Cathedrals‘ first music video, for their song “Unbound,” marks one year since the duo began releasing music online — beginning with that tune, with Brodie Jenkins’ seductive singalong of a chorus over a layered symphony of Johnny Hwin’s guitar and synths. For the video, released today, the pair recruited Maria Kochetkova, a dancer with the San Francisco Ballet, to perform in front of a light sculpture called Sugar Cubes, by SF artist Alex Green. Cathedrals’ debut EP came out this month on Neon Gold, and they’ll play Treasure Island Music Festival Oct. 19.

And in an entirely different vein, The Stone Foxes,  who are home this week after a whirlwind tour of the West Coast, gave us this brand-new video for “Locomotion,” in which our heroes — showcasing a good sense of humor alongside their lack of physical prowess — challenge a bunch of guys who actually know how to play basketball to an ill-fated game. “We thought, what kind of video could encapsulate the song’s story of the [band members] Koehler Brothers’ great grandfather running away from the authorities in newly communist Russia? A sports movie of course!” wrote the band by way of explanation. Gonna call that one a slam dunk.

The band promises to release new music the first Friday of every month for the next year, building up to an album in late 2015. For now, the Stone Foxes will kick off a residency at The Chapel Nov. 1 with Strange Vine.