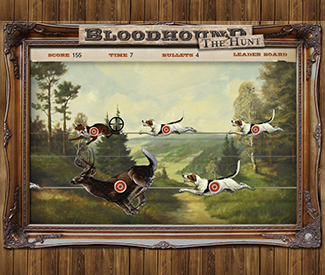 THE WEEKNIGHTER I’ve never been hunting and I’ve only shot a gun on one occasion. OK, it was multiple guns on the same occasion in a shooting range in San Diego, but still I’ve only shot at things once in my life. I guess I did a good job of killing the piece of paper I was shooting at since my friend Josh told me I had good aim for a beginner. It was pretty easy considering the target just hung there and took the abuse.

Despite my lack of hunting prowess and experience, I’ve been to Bloodhound (1145 Folsom, SF. www.bloodhoundsf.com) lots of times. Even though it’s a hunting lodge theme bar, I’m pretty sure it would be frowned upon if you were to walk in there brandishing a hunting rifle. And by frowned upon, I mean people would flee from there as quickly as possible screaming horrible, terrified profanities about someone having a gun. They might do the same if you walked in there dressed like you were going on a hunting expedition, except instead of frightened running and yelling about firearms, it would be about your atrocious attire. Even San Francisco has standards when it comes to what you wear.

I like Bloodhound. It’s got fancy drinks and lots of wood and light bulbs that look old timey but aren’t because actual old timey light bulbs probably wouldn’t light. I know a lot of SF bars have this look now but Bloodhound opened in 2009 so it was ahead of the curve. Plus it has stencils of birds on the ceiling, chandeliers made out of antlers, and dead animal parts on the walls. I think this is supposed to make you think about shooting stuff and since everyone knows shooting stuff makes you thirsty, your mind will get tricked into buying some fancy cocktails. I really like Bloodhound’s fancy cocktails, especially the one named the Bloodhound. This is great just in case you get so drunk you forget where you are. If you remember the name of your drink, you’ll also know where it is that you’re drinking. This also works in reverse.

In case you still had any doubts that Bloodhound is your local hunting lodge in the heart of San Francisco, you must visit the website. Once you get there, you will be serenaded by the sweet and twangy sounds of Nancy Sinatra and Lee Hazelwood doing their rendition of “Jackson.” (No Ted Nugent, though.) I’ve never been to a hunting lodge or to Jackson, but I imagine this website feels exactly like a hunting lodge in Jackson would feel. The website even has a game you can play that lets you shoot stuff! I’m getting thirsty just thinking about it!

Hopefully one day soon you and me can go to Bloodhound together and plan our first hunting trip. And in case we just get too wasted to follow through on our plans, let’s just settle on playing Big Buck Hunter and call it a day.