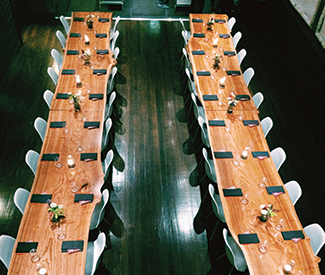 When the website and ticketing software used to book the first tables at your restaurant crashes (just like Burning Man!), you could say you have a hot opening on your hands.

And it’s not some janky software either: It’s what Alinea and Next use in Chicago. No matter, it’s all working now, and people are waiting for the next block of reservations to be released — it’s first-come, first-served, but they’re transferable — for a table at Lazy Bear (3416 19th St, SF. www.lazybearsf.com) the pop-up-turned-legit restaurant that opened in the former Hi-Lo BBQ space in the Mission. Chef-owner David Barzelay is serving 11 courses at two seatings a night for 40 guests, Thursday through Monday nights.

It’s prix-fixe tasting menu, American with modern techniques, for (catch your breath) $120 per person; beverage pairings — under the guidance of bar manager Brandon Presbury and sommelier Marie-Louise Friedland — are an extra $50. Guests are seated at communal tables, so it kind of feels like a fun dinner party, and you can also walk into the kitchen and see what’s up. (Just don’t get in the way or touch anything without asking, mmmkay?). Sign up for the newsletter at the website to find out when the next block of tickets will be released.

Opening this week is The Hall (1028 Market, SF. www.thehallsf.com), a temporary food hall in the former and long-vacant Hollywood Billiards space. Many vendors have their own space within The Hall, like Fine & Rare (you may have tried its sustainable seafood dishes at Off the Grid); Cassia from the Fuki food truck, serving Moroccan and Peruvian cuisine; John Fink’s meaty The Whole Beast featuring gyros and a steak sandwich, seasonal Indian puveyors Raj + Singh, Little Green Cyclo serving pho and other soups you normally can’t get on its truck; Dignitá, a café with pastries; and Anchor Brewers and Distillers (cheers!). You can sit at picnic tables (both inside and outside). Food is served 8am–8pm, and the bar is open 11am–11pm.

San Francisco is really good at creating happy hours with great oyster specials. I mean, really, have you ever been in a city with so many $1 oyster deals? Casanova would approve. Here are a couple new options to add to your list. First up, Ferry Plaza Seafood (653 Union St, SF. www.ferryplazaseafood.com) in North Beach opens its doors at 3:30pm for happy hour, with a half-dozen oysters for $7, or a dozen for $12. There are some small plates, like chowder (a cup of New England, Manhattan, or combo of the two for $4), salmon rillettes for $10, sashimi for $12, and some beer and wine deals too ($4–$5). Available Monday through Friday 3:30pm–6pm (last call is 5:30pm), so don’t be late.

Have you had a chance to check out the new menu by recently hired chef James London at the Elite Cafe (2049 Fillmore St., SF. www.theelitecafe.com)? He’s doing a rockin’ job, with updated dishes like smoked beef tartare with a quail egg, and downright stellar shrimp and grits. But let’s talk oysters: There are happy hour oysters (3 for $5 and 6 for $9) every Monday through Friday 4pm–6pm and Saturdays and Sundays 3pm–5pm. Yeah, weekend oyster happy hour, how sweet is that? Pair them with a Bloody Mary and you’re set. You can also stick around for some live music, 6pm Mon–Wed, never a cover.