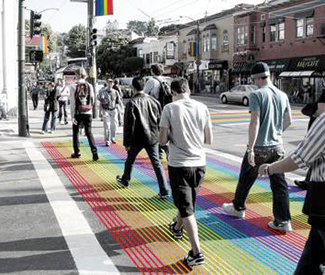 WHO OWNS THE NEW SF?

This week, former Bay Guardian editor and publisher Tim Redmond published an epic investigation on his 48Hills site showing that up to 39 percent of new luxury condos in San Francisco are owned as investments by out-of-towners, puncturing the myth that unfettered market-rate housing development will help with the city’s affordability crisis. See www.48hills.org for more.

SF’s queer and butch communities (and anyone who adores a good bespoke suit) are celebrating the opening of Kipper Clothiers‘ new brick and mortar store at 78 Gough in San Francisco. If you’re looking for supremely tailored traditional men’s clothing for women’s and transpeople’s bodies, this is the hot spot. A free grand opening party Fri/4, 6pm-9pm — with delicious cocktails from Two Sisters Bar and Books, no less — will launch the endeavor, presided over by Kipper founders Erin Berg and Kyle Moshrefi. More info at www.facebook.com/KipperClothiers. GUARDIAN PHOTO BY CABURE A. BONUGLI/SHOT IN THE CITY

HBO’s gay show Looking divided audiences with its somewhat tepid, laidback take on homosexual life in the new millennium. But the excitement of the second season’s filming in SF is undeniable. (For one thing, it’s allowed a lot of our actor friends to eat on the generous extras salaries.) If you’re down to stalk the cute cast and bask in some HBO allure, they’ve been all over the Castro lately, including Wednesday afternoon’s farmers market at Noe and Market streets. Go get ’em!

If there were any doubts that Modest Mouse could still fire up a room, the band put them to sweaty rest with an energetic set Sept. 26 at The Masonic. Check the Noise blog at www.sfbg.com for more photos.

WALK OVER THE RAINBOW

By the time your eyeballs read these words, The Castro will be even more colorful than before. We’re getting rainbows, baby! The city plans to make the 18th and Castro intersection permanently and colorfully bedazzled, and paint the crosswalks the pride flag’s colors. Let’s hope we don’t see any more snafus like the numerous typos on the plaques of LGBT heroes. Thankfully, putting bold stripes of primary colors next to each other should be a lot tougher to screw up. (Although the prospect of rainbow walkways does make some queers, like Marke B., throw up in their mouths a little.)

The 11th commandment is, “Don’t fuck with drag queens!” Following a Facebook revolt over the giant’s deletion of drag queen profiles, users flocked to newborn social media site Ello.co (which is invite-only, so remember to suck up to your friends!). But Ello is off to a shaky start: It temporarily disabled inviting new users due to the flood of newcomers, and has already censored one user for impersonating a brand name (corporate evil! hissss). Hopefully Ello lives up to our ever-so-lofty expectations.

In a landmark win for sanity in California, Governor Jerry Brown just signed the “yes means yes” bill into law, the first national law to define sexual consent. In short: “Lack of protest or resistance does not mean consent,” the law’s language states, “nor does silence mean consent. Affirmative consent must be ongoing throughout a sexual activity and can be revoked at any time.” State-funded colleges must also have policies to handle sexual assault, spurred by a rise in reportage of incidents in schools like UC Berkeley.

Get your head out of the (internet) cloud and into the cloud forest — the San Francisco Botanical Garden’s Mesoamerican Cloud Forest, to be specific. This unique collection of rare, colorful plants native to high-elevation Central American jungles (they thrive here thanks to SF’s daily fog-fests) is in bloom now through the end of December, with free guided walks and in-depth tours (for a small fee) offered throughout the season. San Francisco residents get free admission to the gardens with proof of residency, so don’t miss your chance to see plants like the Giant Groundsel, dripping with enormous yellow flowers, putting on a show in Golden Gate Park. www.sfbotanicalgarden.org

Billionaire Ron Conway has teamed up with other tech investors to launch “One City” — apparently named to counter the “tale of two cities” narrative emphasizing a growing income inequality gap fueled by the tech sector. Backed by Conway’s organization, sf.citi, the campaign “uses an adopt-a school model,” according to a press release, matching 20 tech companies with struggling, under-funded public schools where they’ll donate books or mentor youth. The campaign was announced with a splashy video, featuring cameos by the mayor and the police chief, poking fun at an over-hyped tech gadget called “MyBook.” Tech leaders deserve a round of applause for recognizing that public schools are in dire need. But we hope this doesn’t mean that the only hope for public education is through the intervention of billionaires.