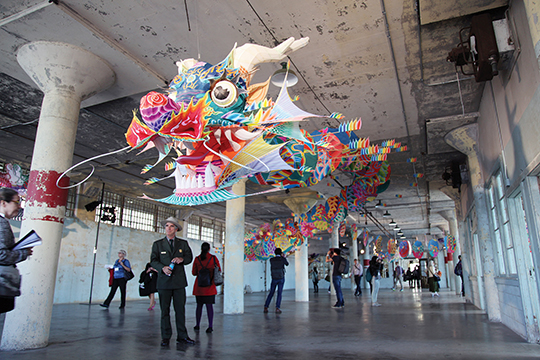 Follow Ai WeiWei on Instagram, and you’ll see many photographs of flowers. The internationally renowned Chinese artist has a morning ritual of placing a bouquet of flowers into the basket of a bicycle locked outside his Beijing studio. It’s a delicate protest, performed “every morning until I regain the right to travel freely,” he explained via Twitter in November 2013, when he began the practice.

On Sept. 24, when a literal boatload of journalists was granted free rein to photograph and explore “@Large: Ai WeiWei on Alcatraz” in advance of its highly anticipated Sept. 27 opening, a blitz of images from the show hit social media networks, stamped with the hashtag #AiWeiWeiAlcatraz. But a simultaneous meme is circulating among the artist’s band of social media followers: #AiCantBeHere.

Ai, an internationally renowned figure and superstar in the art world, remains unable to travel abroad, his passport revoked by Chinese authorities without explanation. Nevertheless, his artwork — seven new site-specific sculpture, mixed-media and sound installations set within the crumbling remains of a federal penitentiary — is now on view at one of San Francisco’s most popular tourist destinations.

The concept of bringing Ai’s art to Alcatraz began with Cheryl Haines, the exhibition curator and executive director of the San Francisco-based FOR-SITE Foundation. Haines traveled to Beijing in 2011 and visited Ai, whom she described as a friend, at his studio.

Just before that visit, the artist had spent 81 days incarcerated following his arrest on purported tax fraud charges. His detainment was widely understood to be retaliation for his outspoken criticism of the Chinese government’s penchant for censorship and track record of human rights violations.

“Through his art, Ai WeiWei fearlessly speaks his truth to power,” wrote art critic and political cultural theorist Maya Kovskaya. In a nation where prominent dissidents have faced imprisonment before, as with the case of 2010 Nobel Peace Prize winner and civil liberties advocate Liu Xiaobo, Ai’s art is infused with an unapologetic political edge.

It may run in the family. His father, Ai Qing, a renowned national poet who was exiled for his writings, wrote in 1946: “In as far as is possible the artist must be a revolutionary. As a revolutionary and as an artist he must represent his times.”

When Haines went to Beijing to visit Ai, “I asked him very simply, is there any small thing I can do?” the curator explained to the Bay Guardian when asked about the inception of “@Large.” He responded that he’d like help bringing his work to a broader audience.

By then, she already had an idea in mind. “I had been thinking for some time about how interesting a site Alcatraz would be to activate with contemporary art, so I raised the possibility of bringing his work to Alcatraz,” she explained in a follow-up email. “He said he would ‘like that very much.’ Thus it began.”

Once a military prison, then notorious federal penitentiary, the island receives about 1.5 million visitors annually. From now until mid-April 2015, tourists visiting San Francisco from every corner of the globe (including China, where online censorship often means information about Ai is hard to find) will have an opportunity to view it, for only the cost of a ferry ticket.

The project, a collaboration between the National Parks Service, the Golden Gate National Parks Conservancy, and the FOR-SITE Foundation, was put together in nine months — there were hoops to jump through, including securing approval from the State Department — as well as hundreds of volunteer hours devoted to making it happen.

As Haines chatted with the Bay Guardian, we stood in the New Industries building on Alcatraz, a place where “privileged” inmates were once allowed to perform manual labor outside of their cells, under the surveillance of armed guards. Looming before us, suspended from the ceiling and snaking around the vast concrete space, was a colossal kite fashioned in the shape of a dragon, a mythical symbol of power in Chinese culture that’s also linked to the east and the rising sun. With Wind, the opening installation of “@Large,” incorporates this and other handmade kites made of paper, silk, and bamboo that will never touch the outside air, a metaphor for confinement. Painted onto them are birds and flowers, many of which are symbols of nations with poor human rights and civil liberties track records.

Quotes are interspersed throughout the body of the dragon, including a quote from Ai that reads, “Every one of us is a potential convict.” Then there’s a quote from another person who has had the experience of getting his passport revoked by his own government. “Privacy is a function of liberty,” reads a message from Edward Snowden.

Tucked into artwork amid a splash of color, this detail could be interpreted as a bold political statement: The young American whistleblower, who was granted asylum in Russia, is wanted by the US Justice Department for leaking information about the National Security Agency’s dragnet surveillance program. Through Ai’s art, however, his actions have nevertheless earned him a kind of temporary commemoration in a wildly hyped exhibition on display on an island prison now operated by the US National Park Service.

In the next room is the installation titled Trace, which blankets the entire room with Legos arranged to display portraits of nearly 200 prisoners of conscience. The panels were assembled by Ai’s team from Beijing, while a host of volunteers from the Bay Area posted up at the Palace of Fine Arts for several weeks to assemble panels, with guidance from a 2,300-page manual.

“This was the only portrait I was able to complete from start to finish,” explained Tim Hallman, one of the 90 volunteers to help assemble “Trace,” as he stood in front of a Lego portrait of Mohammed Al Roken, an attorney jailed after representing human rights activists in United Arab Emirates. “Spending 10 to 12 hours completing this, there was a connection. Who is this man? I feel a connection to this person, just because I worked on his portrait.”

In an artist’s statement, Ai wrote about the prisoners of conscience showcased in “Trace”: “These are all nonviolent people who have lost their freedom because they expressed their ideas, imprisoned for trying to improve their conditions through writing or peaceful protesting. Many of them might stay in jail for the rest of their lives or be forgotten by the general public, but in truth they are heroes of our time.”

While prominent names such as Nelson Mandela and Myanmar opposition leader Aung San Suu Kyi appear in the Lego portraits, lesser known activists and journalists are also featured. They include Reeyot Alemu, an Ethiopian independent journalist in her early 30s who was jailed after writing critically about issues such as the root causes of poverty and gender equality, and Dashgin Melikov, a 22 year-old youth activist from Azerbaijan who was sent to prison after writing satirical and critical blogs about the government.

Chelsea Manning, the US Army whistleblower formerly known as Bradley Manning who is now serving out a 35-year prison sentence for leaking classified military information, is also pictured, as is Snowden.

“One of the over-arching goals for the exhibition is to spur a dialogue on how we globally define liberty, justice, individual rights, and personal responsibility,” Haines wrote to us in an email. “All of the works aim to inspire individual reflection on some of the most pressing social issues of our time.”

Ai has never been to Alcatraz, but he and the design team relied upon architectural renderings, 3-D models, films, books, photographs, maps, and other digital proxies for the physical space on Alcatraz Island to virtually craft the exhibition.

As he began conducting research for the exhibit, “I was especially struck by events related to the Native Americans who once occupied the island to demand their rights to the land and to have their voices be heard,” Ai wrote in an artist’s statement. In the 1980s, when Ai lived in New York City, he hung out with famed poet Allen Ginsberg and took thousands of photographs, focusing on themes like gentrification and the city’s poor treatment of homeless people.

Alcatraz has historic significance not just as the site of a federal penitentiary — in many ways a symbol of cruelty embodied in the history of the justice system — but for the famous 19-month Occupation of Alcatraz in 1969 and 1970. Artifacts from that event are still visible on Alcatraz: look at the eagle statue mounted above the crumbling administration building, and you will see that the red and white stripes from an American flag were converted by Native American occupiers to read “Free.”

One of the “@Large” sound installations, called Illumination, highlights a darker chapter of Native American history. In 1895, 19 Hopi prisoners were incarcerated there for refusing to allow their children to be sent to boarding schools set up by the US government.

To hear it, visitors must enter psychiatric observation cells, small tiled chambers where inmates who had psychotic breaks were held for observation while in their most acute states. The musical chanting piped into one of the observation cells is Eagle Dance, a traditional song of the Hopi tribe, recorded in 1964.

Take a short walk into the penitentiary hospital from the psychiatric observation chambers and the theme of flowers emerges once again, in an installation titled Blossom. It features intricate carved porcelain sculptures of white flowers blooming out of bathtubs, sinks, and toilet bowls.

On the day of the public opening, Joe Meade, who was part of the installation team with the FOR-SITE Foundation, watched with his family as members of the public surveyed Blossom for the first time.

“I think we’re really lucky in the Bay Area to have this,” he said. “I think one of the things that you’re going to experience here is that moment when you encounter something, and it’s completely unexpected. That’s a unique opportunity in our lives. … We’ve already had people in the New Industries Building who were just here as tourists, and they saw someone that they actually knew, imprisoned,” when looking at the Trace exhibit.

The final installation, Yours Truly, is set in the dining hall. People are invited to send postcards, marked with the birds and flowers of nations where people are incarcerated, to political prisoners.

“Today the whole world is still struggling for freedom, and there is nothing ahead but more struggle,” Ai wrote. “Many of my friends are still in jail for utterly nonsensical reasons, and the power that put them there has no respect for the law. In such a situation, only art can reveal the deep inner voice of every individual with no concern for political borders, nationality, race, or religion. This exhibition could not come at a better time — though, when one is fighting for freedom, any time is the right time.”