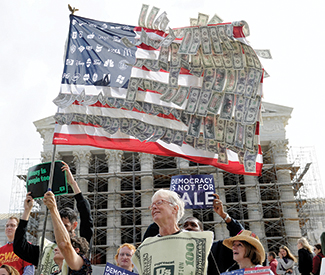 Progressive groups are calling the recent US Senate vote on the Democracy for All Amendment — a constitutional amendment seeking to end corporations’ right to spend unlimited cash to influence elections — a “historic step forward” and “a critical and positive step,” although it failed to win the two-thirds vote needed for approval.

Despite the disappointing outcome, the grassroots effort to end corporate personhood continues. In San Francisco — where the beverage industry has dumped nearly $1 million to defeat the soda tax (Prop. E) and Realtors have given nearly $600,000 to defeat the anti-speculation tax (Prop. G) — the nationwide battle over campaign finance reform has clear implications.

In September, the Senate voted 54-42 (with 4 abstentions) against moving forward with the landmark legislation, crafted to eliminate the threat of “dark money” — anonymous, unlimited campaign contributions. The Democracy for All Amendment would also have moved toward a reversal of the 2010 US Supreme Court decision in Citizens United v. the Federal Election Commission (FEC), a widely criticized 5-4 ruling that the government may not limit political spending by corporations during election campaigns.

Even though the amendment was advanced to the floor by a 79-18 vote, it ultimately fell 13 votes short of securing the two-thirds majority needed to move forward. Despite its failure, polling commissioned by the Corporate Reform Coalition demonstrated that the Democracy for All Amendment has the support of more than 73 percent of the American population.

“It is unfortunate, but not unexpected, that Republicans would filibuster this measure and instead choose to support a broken system that prioritizes corporations and billionaires over regular voters,” Sen. Tom Udall (D-NM), who sponsored the amendment, said in a press release by ReThink Media.

A constitutional amendment requires approval by a two-thirds vote in both the US Senate and the House of Representatives, and is then ratified by three quarters of the states legislatures. Alternatively, a constitutional convention can convened by two-thirds of state legislatures, known as an Article V Convention after the constitutional section that allows it, essentially bypassing Congress.

With the Democracy for All movement stalled, we’re left trying to decipher what’s next. As the nation heads into midterm congressional elections, with contentious races in California and beyond, the expected outpouring of corporate funding has the potential to impact the outcome of political races this fall.

When it comes to campaign finance reform, “No single issue is more important to the needs of average Americans,” Udall said in a prepared statement following the Democracy for All Amendment vote.

San Franciscans already stand to get burned by corporate dollars. The opposition campaign to the sugary beverage tax proposal known as Prop. E, backed by the American Beverage Association, has blanketed the city with campaign mailers filled with specious claims seeking to draw a link between the proposed tax, meant as a public health measure, and the rising cost of housing in San Francisco. The public affairs firm Goddard Gunster recently disclosed having received $946,265 to fuel the defeat of Prop. E.

While corporate personhood is a focal point of the Democracy for All Amendment proponents, concern has also been raised about the ability of extremely wealthy individuals to single-handedly influence political outcomes. In San Francisco, for example, tech billionaire Sean Parker — of Facebook and Napster fame — has reportedly contributed $49,000 toward Prop. L, an initiative calling for the construction of new parking garages, among other things.

In an op-ed published by Politico, Udall highlighted a worrisome rise in dark-money spending nationwide, noting that almost $300 million in virtually untraceable corporate funds had changed hands during the 2012 election, with a hefty jump to as much as $1 billion projected in 2014.

With so much at stake, does the movement for campaign finance reform have what it takes to blaze a trail forward, despite the recent setback in the US Senate? Between a new war in the Middle East and racial violence in Ferguson, the issue campaign finance has been all but eclipsed in mainstream media.

Nevertheless, grassroots momentum appears to be alive and well. The constitutional amendment was made possible thanks to shorter term, locally driven battles around the issue of campaign finance, with resolutions passed in 16 states, including California. The recent defeat of the Democracy For All amendment seems to have prompted a rallying cry, rather than the downfall, from dozens of local governments and organizations.

“Before leaving town, the Senate Republicans outrageously blocked our efforts to overturn the Citizens United decision, which gave millionaires and billionaires the power to buy our elections,” US Sen. Barbara Boxer (D-Ca) said in a prepared statement to the Guardian. “We will not give up the fight to repeal this disastrous decision and give our democracy back to the American people.”

“The result [of Citizens United] is what we have today: an explosion of outside, undisclosed election spending funded by corporate money, funneled through secretive groups into federal, state, and local elections,” said US Sen. Dianne Feinstein (D-Ca) in a Senate Judiciary Committee meeting in July.

Referencing the attempted derailment of California’s climate change law, the Global Warming Solutions Act (AB 32) by big oil companies when it was passed in 2006 and continuing today with efforts to undermine its implementation, Feinstein touched on elected officials’ responsibility for “protecting the basic duty of a democracy to ensure that the system is not bought and controlled, and that elected officials act in the public good and are responsive for their living, breathing constituency.”

California just might be poised to help inspire the mass organization needed to turn a 54-42 vote into something more than simply a “positive step.”

“It will not happen anytime soon,” UC Berkeley Professor William Turner told the Guardian, regarding the likelihood of the Democracy for All amendment moving forward. “No way can it get the required votes in the current or any foreseeable Congress, and [there’s] no likelihood of [a constitutional convention being called] by two-thirds of the states.”

Regardless, Turner, who has taught the renowned undergraduate course The First Amendment and the Press at Berkeley for over 25 years, admits that the recent amendment is better than others created in the aftermath of Citizens United.

“A couple of them would have tried to end corporate personhood but would have caused other mischief. A couple of others clumsily tried to impose contribution and spending limits. The most recent one, as I remember it, simply empowered Congress and the states to impose reasonable restrictions on spending and contributions from whatever source,” he said.

Nailing down the perfect balance between limiting unregulated money and free speech is a tall order. But how important was the Democracy for All Amendment vote for simply furthering this conversation?

“I think that getting to the next stage will be a challenge,” Kathay Feng, executive director of California Common Cause, told the Guardian. That nationwide organization has fought to reform campaign finance and corporate power, counting its own Steven Spaulding as one of architects of the Democracy for All Amendment. “The issue of money and politics is one that citizens have been concerned about and taken to task for years.”

Feng added that the issue is contentious given party allegiances. “I think there are some entrenched political commitments. Elected officials are afraid to touch this issue and are treating it like a third rail,” she said. Yet if the proclamations of various grassroots organizations and politicians following Democracy for All’s defeat are any indication, all signs point to continuing momentum around campaign finance reform in the very near future, with Californian movers and shakers leading many of the initiatives. “I think at the general level California residents and voters care deeply about this issue,” Feng told the Guardian. We might not know exactly what’s in store next for the Democracy for All Amendment, but something tells us this isn’t going away anytime soon.