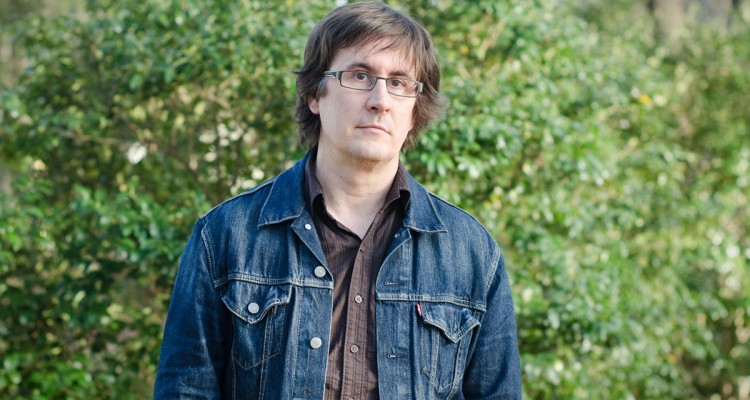 John Darnielle’s brain seems like it runs at just a slightly higher RPM than other people’s.

One could get this impression from listening to the tightly crafted mini-universe he creates inside each track on a Mountain Goats record — take your pick, he’s penned some 14 full-length studio LPs inside the last 18 years, not counting a slew of singles and B-sides and other assorted treats — or from his Twitter feed, which zooms from his enthusiasm for black metal to witty commentary about televised wrestling to on-point, eloquent opining about Ferguson, vegetarianism, or abortion rights.

He also wet his feet in the world of publishing in 2008 by penning an unconventional book for the 33 ⅓ series about Black Sabbath’s Master of Reality, in the form of a collection of fictional journal entries written by a teenager from a mental hospital.

But his first novel, Wolf in White Van (published this month by Farrar, Straus & Giroux), is another animal altogether, one running at an even more impressive speed. Though its motifs won’t be unfamiliar to Darnielle fans — despair, metal, the difficulty of connecting to other human beings, the isolation and unsung miseries of suburban adolescence — the narrative is far more vast and complex than anything he’s ever written. Told backward, the story unfolds like a labyrinthian treasure map, one in which the treasure chest keeps moving but you’re careening toward it regardless, and also you’re a little scared of what you’ll find when you get there.

For the first half of the book, all we know is our protagonist, Sean, is a man whose face is horribly disfigured because of something mysterious that happened when he was 17, and who lives a highly secluded life as a result. He makes a living running an analog role-playing game called “Trace Italian,” set in a post-apocalyptic Midwest, in which players snail-mail him their choices and he mails back where those choices have led. Sean finds himself on trial when two teens take the game a little too seriously, and the rest of his life story — including the the incident that caused his disfigurement — is delivered to readers in surreal, highly visual flashes. It’s a survivor’s story, however dark. (Which is, of course, the very feeling that draws listeners to Darnielle’s music, record after record after record.)

Within weeks of its publication, the book’s garnered rave reviews, including a nomination for a National Book Award. Also, I’m not going to lie; I felt mildly fucked up for about three days after reading it. Which I think is generally a sign of good art?

Darnielle’s currently in the middle of a national book tour, reading and speaking at bookstores throughout the U.S. — including the new Green Apple Books on the Park this Mon/29. We caught up with the impossibly fast-talking Darnielle on the phone a couple weeks ago from his home in North Carolina, where he’d just returned home from grocery shopping and was inspecting the little fishpond in his backyard, worried that the herons had attacked and eaten the last of his fish. [Note: I erred on the side of vagaries rather than spoilers in this interview, which has also been lightly edited for the sake of cohesiveness.]

San Francisco Bay Guardian So I love the book. I read it in one sitting and I haven’t been able to get it out of my head. Are you getting good feedback? How does it feel different from having a new album come out?

John Darnielle Thank you. I’m so glad, I really didn’t know how it was going to be received. The wait for a book to be out in the world is so long, and you read it 15 times, and the first time you’re thinking “This seems so fresh and so good” …and then by the end you lose sight of the big picture, going “I hope this reads as well as it was reading five years ago.”

With music, I always try to write and record and get it out there into the world. Because there’s a freshness for me, and also because I want people to hear them when they’re new. Before the Internet came around I used to just play new stuff all the time. With a book, there’s so much to it, by the final process, it’s like you’ve built a house.

Also, this is all me, by myself. People always treat my albums like they’re just me, but there are other musicians — Jon Wurster and Peter Hughes — who are a big part of it.

SFBG Speaking of which, you’ve also put out four albums in the last six years. Can you walk me through the timeline of how this book came about amidst all that?

JD The day after I turned in Masters of Reality in 2007, I wrote what ended up being the last chapter of [Wolf in the White Van]. And that was going to be the one chapter that Sean got — I wrote all these other chapters from the perspectives of different narrators. Some of them made it back into the book in a different form. But the day that I got the idea to tell it backwards, I decided, okay, let’s stay with the one guy.

The scene that opens the book [in which Sean’s father is carrying him down a hallway after coming home from the hospital] was originally told from his father’s point of view. It was very hard to let go of those chapters, how I’d already been through that process.

SFBG The father-son relationship still feels very central, and I know your relationship with your own stepfather shows up a lot in your songwriting. Do you think becoming a father yourself affected that aspect of the story?

JD I actually wrote that before [my wife] was even pregnant. But yeah, there’s a lot of grief for father-son relationships [in my work], and I think if I wrote the book now, being a son and a father certainly inform those things. I’m old enough now to think about parents, you know, that they’re parents. [Sean’s] parents were once parents to a baby.

I was at one point suicidal when I was a teenager, and that’s a thing, as a parent, how do you deal with it when your kid says that?…you have to have respect for that situation, and this is his account about living with the aftermath. And part of that is not ever being close to his parents again. That’s where you have to respect people’s descriptions of the worlds they live in, and not force them to live in a world that just makes sense to you.

SFBG When you decided it was just going to be Sean as a narrator, were you wanting people to realize they were working with an unreliable narrator? As the book goes on and we understand more about his situation, I think empathize with him more but also maybe trust his point of view less.

JD I think people rely on narrators to give them what they want to hear, and he’s actually really reliable in that he describes the reality of the situation — right down to not being certain of his motives. I think that’s where you realize that narrative is kind of an imposition. When people break up with each other, we always ask ‘Oh, what happened?’ or ‘They grew apart’ to put some kind of story together and it’s really, they just sort of did. A little bit of this, a little bit of that, and someone pulled the chain.

I think Sean’s reliable in that he’s telling the truth about himself, and the way that looks from the outside is something we have to infer from the way people look at him, treat him. It’s kind of a basic existential problem with subjectivity, right?

SFBG The last time I talked to you, you mentioned that some of your song names came from notebooks you keep, with simple phrases you see and like — “Outer Scorpion Squadron” [from All Eternals Deck] and the like. I noticed some similar phrases in the game, on the cards Sean sends back to players.

JD Yeah, I was able to weasel one or two of those in there. The rock throne. In a big book, especially with his game, you can do that — you’re really just making a giant tapestry with all these obsessions, occupations, old interests, small things that inspire you; you can get all of those sewn together in your quilt.

SFBG How did the game come about? It’s such a detailed world within the world of the book.

JD It wasn’t part of the initial idea. When I was brainstorming I had bits of a story to tell, and I was going “Okay, if I have this person [who’s so isolated], how would he make a living?” And in the present day, it would be a lot of IT jobs, home office type of stuff. But back then [pre-Internet] I think it would’ve been much harder. I think I got the idea on an airplane and just started to swell up from the idea of it, having this whole other universe to populate.

SFBG Which is, of course, how a lot of people spend their time now, but they’re universes that exist on the Internet.

JD And the Internet is great for a lot of things, but it is a more solitary activity. There’s something about the mail — speaking of old interests — I used to submit my old short stories to magazines when I was 12 or 13 years old, and there was the whole world of getting something in the mail from far off, a feeling that was really intense, that I don’t think happens when you get something back in seconds. I also used to send away for stuff from [Belgian hardcore band] Agathocles, and they’d send you stuff directly from Holland — 7-inch white vinyl, flyers for local shows and things like that. It was a very arcane and awesome world to be part of.

I mean, the mail is kind of rad. I always like when you see little ads that are just, send in $5, and you have no idea what this service is, but you’ll probably learn something you don’t know anything about. I like thinking about, you know, someone took out that ad, and what the story is behind that.

SFBG Before I let you go — tell me about this fish you’re so concerned with.

JD Well, we live in a pretty wild area in North Carolina, so we have this pond, nothing fancy, just a little fishpond, and there are also hawks around and sometimes herons, so I guess these goldfish were destined to be eaten, so that happened recently. And I was up here the other day, actually doing an interview, and I saw this flash of orange and it was this one fish that used to bully the others that had survived the massacre. This one survivor fish. But I’m not seeing him now.

JD It was a big one; that would be a mouthful. He could turn up, though.

[Update, two days later: “One fish is still among the living.”]

John Darnielle will read from Wolf in White Van, in conversation with Robin Sloan, at 7pm on Sept. 29, at Green Apple Books on the Park (1231 9th Ave, SF). More deets: www.greenapplebooks.com.