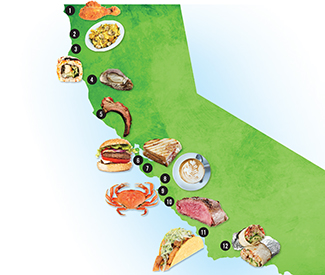 FEAST: COAST BY BIKE I spent my vacations on my bicycle this summer, pedaling from southern Oregon to San Luis Obispo and looping through the Santa Cruz Mountains on three separate bike tours, covering almost 1,000 miles over three weeks, fully loaded with camping and other gear.

It was as healthy, athletic, and adventurous as it sounds — but it also involved some serious feasting along the way. We were often ravenously hungry when we would stop for meals, eager to splurge on whatever struck our fancy on the menus, or just feel an almost irrational appreciation for simple snacks.

After all, we had earned it. And with hiker-biker campsites costing just $5 per night, we could spend our vacation money on good food and drink to fill our internal fuel tanks and feed our taste for decadent delights.

There’s a certain ethos to eating on a bike tour, as I learned from my friend Jason Henderson (the SF State geography professor who writes the Guardian’s Street Fight column) and other veteran bike tourers along the way. Some young cyclists on long trips go for austerity, eating simple meals out of cans or jars to keep their costs down, but we were going for maximum enjoyment.

We cooked about half our meals, mapping out the last place to shop for fresh food before our camping destination for the night. That sometimes meant schlepping heavy groceries — fruits and vegetables, pasta and sauce, rice and beans, beer and wine — up to 10 miles.

We didn’t always use perfect judgment, such as on the long day’s ride from Humboldt Redwoods State Park to the Standish-Hickey State Recreation Area, an otherwise remote site along the Redwood Highway that nonetheless had an awesome restaurant and store, The Peg House, right outside the campground entrance.

In the mornings before breaking camp and hitting the road, usually by 8am, we made coffee and top-quality oatmeal mixed with fresh berries (occasionally picked ourselves from the roadside), brown sugar, and walnuts. This was known as the “first breakfast.”

Two or three hours into the ride, depending on the route, we would stop at some random restaurant for the second breakfast, and it was always such a treat, anything from surprisingly awesome fried chicken from a little market to the best Hangtown Fry (mmm, oysters and eggs!) I’ve ever had.

Later, we’d stop for lunch, usually famished by then, a meal that sometimes included a beer or two if we were close to our destination for the night. Occasionally, there would be a second lunch, and on a few rare occasions when there was a restaurant at the campground, a big, fat dinner feast.

That element of randomness on a slow road trip, when hunger or whims pulled us into some funky little roadside restaurant or store along California’s epic coastline, was one of the great and unexpected joys of my summer bike tours. And while there were many awesome spots we hit along the way, here’s a representative sampling, north-to-south, of a dozen meals that lingered with me:

Fried chicken at Fort Dick Market, Fort Dick
Riding from Harris Beach, Ore. toward Crescent City, that mid-morning hunger pulled us into a little roadside market, and the smell of fried chicken propelled us from there. Fried chicken, mashed potatoes, and coleslaw for a second breakfast? Por que no? Well worth it.

Hangtown Fry at Seascape Restaurant, Trinidad
We rolled through beautiful Trinidad on one of our shortest ride days, under 30 miles, so we didn’t mind lingering down by the harbor during a long wait for a table at Seascape Restaurant. And when I put that first bite of my Hangtown Fry in my mouth, the oysters’ vital juice mixing with the cheesy eggs, I believed I reach culinary nirvana.

Sushi room service at Hotel Arcata
My riding partners had traveled all the way from Portland, so they needed a Laundromat and a night in a bed by the time we reached Arcata. The quaint and historic Hotel Arcata was great spot right on the town square, and better yet, it offered room service from Tomo Japanese Restaurant. Fat specialty sushi rolls were a decadent treat after a long ride while my friends washed their skivvies.

BBQ Oysters at The Peg House
Oh, how I wished we had known about this place before we arrived at Standish-Hickey State Park near Leggett. The store was filled with gourmet goodies and a great beer and wine selection, and the adjacent restaurant had a huge outdoor patio, a stage for live music on weekends, and a wonderfully full menu, including some of the most amazing BBQ oysters I’ve ever had, bathed in some secret sauce that I wanted to drink from a pint glass. So that night, I had two dinners.

Ribs at Bones Roadhouse in Gualala
Entering the lovely coastal town of Gualala, past the large dinosaur-shaped topiary on the edge of town, I was immediately charmed. And starving after arriving in our destination town well ahead of my traveling companions. So I hit Bones Roadhouse, a groovy spot with an ocean view and autographed dollar bills covering the walls and ceiling, and ordered a huge plate of smoked pork ribs and two local IPAs on tap. Ah, life is good.

Burger and beers at Pescadero Country Store
After a long day’s ride from San Francisco on Labor Day weekend, with only a few more miles until our Butano State Park campsite under the redwoods, this place not only had awesome gourmet burgers and two fine IPAs on tap, it also had a great little jam band playing on the sunny patio.

Pulled pork sandwich at Big Basin Store
Big Basin Redwoods State Park is a beautiful, popular spot that doesn’t seem to have a restaurant, only a little camp store. Ah, but it has recently added a little restaurant in the back, something visitors would hardly notice. And even though the menu is small, it did have some super yummy pulled pork panini sandwiches that hit the spot after a dusty ride on a dirt trail from Butano.

Coffee and Mocha at Surf City Coffee, Moss Landing
Sometime, between our first and second breakfasts, we’d stop for coffee drinks, which I’d drink as I rode from a Contigo cup that fit perfectly in one of my water bottle holders. At this cute and colorful little spot, I got one of the best mochas of the trip and picked up a bag of fresh ground coffee to go with our first breakfasts.

Whole cracked crab at Liberty Fish, Monterey
It was a big ride from Sunset State Beach all the way to Big Sur, more than 70 miles, with Fisherman’s Wharf in Monterey the lunch spot at the halfway point. To mark the spot and fuel up for a big afternoon ride, I devoured a whole cracked Dungeness crab and cup of clam chowder. Then I was good to go.

Steak at Big Sur Lodge
Halfway through our first tour from SF to SLO, we decided to spend two nights under the redwoods at beautiful Pfeiffer Big Sur State Park, which also had a fancy restaurant, Big Sur Lodge, right at the campground. We did some serious feasting both nights, short ribs the first night and a thick, perfectly cooked steak the second. Totally decadent, totally worth it.

Smoked albacore tacos at Ruddell’s Smokehouse, Cayucos
This tiny spot by the beach doesn’t look like much, offering mostly just smoked meat and fish tacos and sandwiches, but that’s all you need. It was so good that we even bought a pound of smoked albacore to go.

Lamb burritos at The Wild Donkey Cafe, San Luis Obispo
Offering the uniquely compelling combination of “Greek and Mexican Cuisine” (as well as a table that allowed us to keep an eye on our loaded bikes, which sometimes influenced our restaurant choices), this was a great little spot with an interesting menu, friendly service, and yummy grilled lamb burritos.