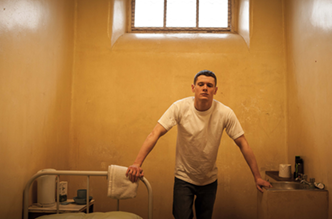 Scottish filmmaker David Mackenzie’s prison drama Starred Up is a brutally raw indie film starring rising actor Jack O’Connell as Eric, a 19-year-old offender who has just been “starred up,” or transferred to an adult prison due to his uncontrollable and dangerous behavior. Though he’s passive when we get our first look at him, he won’t be for long: One of the first things Eric does upon entering his new cell is expertly rig a shank out of a toothbrush and a shaving razor, which he then hides in an overhead light fixture. Clearly, he’s done this before.

This weapon takes awhile to be deployed, but he’s not so patient with his fists, nor is anyone here; inmates regularly resolve their differences by beating each other to a pulp. Screenwriter Jonathan Asser provides powerful insight with his own history as a psychotherapist in a London jail, an experience that inspired the character of therapist Oliver (Rupert Friend). Oliver has hope for the violent Eric — he’s maybe the only one who does — knowing that this furious creature is likely destined to slip through the cracks like so many before him.

The well-meaning doc attemps to challenge prison authorities who prefer slapping troublemakers into solitary confinement by offering anger-management treatment to the worst offenders. This includes, however briefly, an inmate who happens to be Eric’s surly, long-absent father (Ben Mendelsohn). But there are no quick fixes for any of these characters, especially with shifty allegiances between different factions both in front of and behind bars.

Although American viewers will likely struggle to understand the thick accents (not to mention the free-flying jailhouse slang), this doesn’t exactly matter in a film that propels itself via physical confrontations rather than dialogue. As for star O’Connell, he’ll soon be seen as a very different kind of prisoner in Angelina Jolie’s Unbroken.

STARRED UP opens Fri/26 at the Roxie.