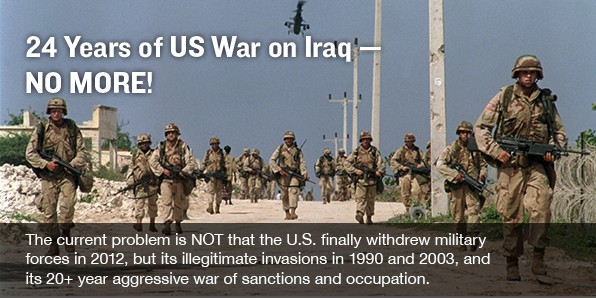 With the US military now bombing targets in both Syria and Iraq, and the Islamic State that we’re targeting threatening to retaliate against US citizens, the Bay Area’s anti-war movement is taking the streets today [Wed/24] and in the coming days (although the SF Chronicle apparently didn’t get the memo).

Two of the Bay Area biggest anti-war groups, the San Francisco chapters of ANSWER (Act Now to Stop War and End Racism) Coalition and The World Can’t Wait, have called for a march and protest today at 5:30pm starting at Market and Powell streets.

“[President Barack] Obama owns this immoral and illegal action, the ultimate war crime — invasion of a sovereign nation that poses no imminent threat to the aggressor. “We” did not ask for or approve this war. NOTHING good can come from U.S. bombing, and we need to say so immediately and widely,” The World Can’t Wait said in a statement calling for people to show up with sign and something to say.

Brian Becker, national coordinator of the ANSWER Coalition, put out a statement that included this: “Let’s tell the fundamental truth that the Obama Administration conceals from the people. The so-called Islamic State or ISIS wouldn’t exist today as a major force either in Syria or Iraq except for the U.S. military aggression that smashed the secular, nationalist governments in Iraq in 2003 and Libya in 2011 followed by its catastrophic support for the armed opposition against the similarly organized government in Syria.”

But hey, nothing solves problems created by US militarism like the US military, right? No? Yeah, probably not, so get out there and be counted as a voice for peace.

[UPDATE Thu/25]: The turnout and energy level at yesterday’s anti-war rallies seemed a little lackluster, which was probably more of an indicator of the disempowerment people feel and their grim resignation toward our state of neverending war than actual support for the current military operations. I reflected on this phenomenon in 2008, five years after our military invaded Iraq, in an award-winning piece called “Resistance is Futile — or is it?” and I think it’s work another read in light of current events.