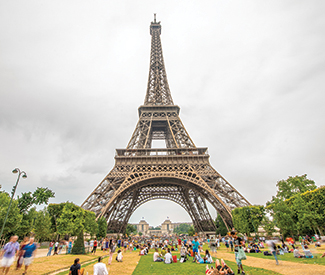 FEAST: PARIS Our first night in Paris was the stuff of foodie dreams: digging into steak tartare and downing natural wines with Autour d’un Verre restaurant co-owners and chefs Vikki Perry and Kevin Blackwell — at another well-known restaurant, Les Fines Gueules, where the conversation flowed freely, and the couple’s young daughter and pet dog under the table rounded out the comfortable, friendly atmosphere.

Though this was the first time I had met Perry, Blackwell, Perry’s mum, and everyone else working at and/or dining in the restaurant, the meal resembled a close family gathering. My husband and I traveled to Paris because I had been reading A Moveable Feast, Ernest Hemingway’s memoir of the city in the 1920s. We were in the middle of a two-week European vacation with extended family, and a spontaneous two-and-a-half days of love and adventure in the City of Light was enticing. Knowing there was no way we could adequately see all of the sights in two days and manage to enjoy ourselves, we decided to forgo the tours and the queues altogether. Like Hemingway, we nestled our memories in Parisian cafés. And Blackwell and Perry, whose brother happens to be married to my husband’s sister, were the perfect guides.

The couple’s philosophy at Autour d’un Verre — simple cooking that highlights the quality of locally sourced organic ingredients — paired well with our own philosophy on good eating. A surprise to us, though: this minimalist ideology extended to Paris’ natural wine movement as well. Perry and Blackwell swear by natural wines, which are made without added chemicals, and hark back to ancient days, when wine was made merely of fermented crushed grapes, no yeast, enzymes, or extraneous tannins added. These kinds of wine are becoming ubiquitous in California, but in France — where experimentation can often be limited by cultural and economic concerns — they’ve really started to take off in the past few years. “Once you get into natural wines you won’t want anything else,” Perry said. “They are crisper with a stronger sense of fruit; there’s a freshness to natural wines. The character of the grapes and the nature and essence of the terroir are able to come through due to the lack of chemicals used, that can often hide these natural qualities in industrial wines.”

Perry and Blackwell regularly attend natural wine tastings at Parisian restaurants (sometimes their own) and throughout France, where they discover new winemakers or choose which wines to carry from their existing French suppliers.

“We’ve developed strong friendships with almost all the winemakers we work with,” Perry said.

And people are paying attention. According to Perry, French food critics now almost exclusively drink natural wines, leading more and more Parisian restaurants to stock at least a few bottles in hopes of getting good reviews.

“Natural wine is a little bit everywhere,” Perry said. “Whereas before, natural wines in a restaurant were a sure sign that the food you would get would be of high quality, locally sourced and generally cared about, this is no longer the case.”

Perry and Blackwell directed us to the Michelin-star L’Agapé, where dining room manager Shawn Joyeux helped us pick out a wonderful French wine — which just happened to be natural — to accompany our fresh, delicious, prix-fixe seven-course meal.

The wine — a white blend, though colored an unusual dark amber — was unlike any we had ever tasted. When we struggled to come up with a description, and asked if it contained a hint of apple, Joyeux confirmed.

“But it’s like an apple that has ripened on the branch, fallen to the ground, laid there for a few days, and someone picked it up and mashed it between their hands,” Joyeux said.

We were impressed: His colorful description perfectly captured the taste. “The flavor is magnificent,” he said. (Joyeux spoke the truth — although many friends I’ve repeated his description to have recoiled.)

Perry confirmed that there can be a lack of understanding toward unique natural wines. “Customers who are used to industrial wines sometimes have difficulties adjusting their tastes to natural wines that are very different,” she said. “They will sometimes mistake the differences as faults.”

On our last night in Paris, we found L’Etiquette — a wine shop on Ile Saint Louis specializing in organic wines from small French producers. After a quick interrogation regarding our preferences (a crisp white) and exactly when we would be imbibing (post haste), the proprietor was more than happy to help us pick out a natural wine, uncork it, and make us promise to let it breathe for no longer than 10 minutes.

Bottle in hand, we traveled to the Champ de Mars where we joined groups of families, friends, and couples of all ages on picnic blankets in front of the Eiffel Tower. At exactly 10pm, the iconic landmark began to sparkle.

Maybe it was the light show (which repeats hourly between 8pm and 1am), or the happy picnicking families, or, as Perry described, maybe it was “that happy, ‘life’s not so bad’ feeling you get from natural wines.” Whatever the reason, we fell in love with Paris, wine and all.