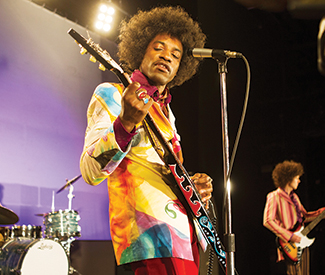 FILM The music biopic is a tricky beast. Very few directors are able to compellingly compress true-life tales into films that actually have some interest beyond “Hey, that famous/infamous thing you already knew about happened like this!” — though superior performances (recent Oscar-winning examples: 2004’s Ray, 2005’s Walk the Line) can help buoy the results. Far rarer are more artistically daring films that unfold more like docu-dramas than glossovers, like Control (2007) and Sid and Nancy (1986).

As with any based-on-truth film, there’s also the question of whose version of the truth is being told. In music biographies, that’s especially important, because if whoever owns the song rights doesn’t like the portrayal of the subject — or if he or she doesn’t have a finger in the box-office pie — you just might end up with a musical story that contains very limited music. This is a problem facing Jimi: All Is By My Side, written and directed by John Ridley, who won an Oscar for scripting 2013’s 12 Years a Slave. The Hendrix family noped any song permissions, so you won’t be seeing star André Benjamin, aka OutKast’s André 3000, wail through “Foxy Lady” or any other songs that hit big during the film’s time frame (it ends just before Hendrix’s stateside breakout at the 1967 Monterey Pop Festival). He does get to noodle on some blues riffs, and the Jimi Hendrix Experience’s notorious cover of “Sgt. Pepper’s Lonely Hearts Club Band” — played days after its release in front of a crowd that included astonished Beatles — is one of Jimi‘s few exhilarating moments.

However, the absence of any signature tunes is just one of the film’s problems. Controversy has already swirled around the script’s portrayal of Hendrix as a violent drunk. Former girlfriend Kathy Etchingham (Hayley Atwell) has publicly objected to the film’s depiction of her relationship with Hendrix. Faring marginally better is Linda Keith (Imogen Poots), who famously used her connections as Keith Richards’ girlfriend to help Hendrix break into the music biz. Both women come across as bossy and needy, though Jimi also spends a lot of time making Hendrix out to be an aimless drifter who probably wouldn’t have made much of himself, despite his talent, were it not for people like Keith or his manager, Chas Chandler (Andrew Buckley).

Most of Jimi takes place in swingin’ London, and Ridley conveys the cultural mood with collage snippets (the Who performs! A monk sets himself on fire!), costumes heavy on the go-go boots, and a lot of non-Hendrix tunes. The film addresses racial issues in a few scenes that don’t otherwise fit into its flow, making them feel like afterthoughts: Jimi and Kathy are harassed by the police; Jimi meets a pot-smoking activist named Michael X who encourages him to politicize his music. Stripped of his guitar, Hendrix’s preferred mode of communication is soft-spoken hippie patter (“I’m in a constant struggle against the color gray…”); he’s also fond of thrusting scribbled lyrics at the women he’s wronged as a matter of apology.

Without those electrifying songs to punctuate Hendrix’s day-to-day drama, Jimi‘s narrative is meandering at best. We already know he’s going to become a star. We know he’s going to die young. (Ridley might not know we know, however; for an Oscar-winning screenwriter, he’s sure quick to violate the “Show me, don’t tell me” rule by using onscreen text to ID such obscure characters as “George Harrison.”) Sure, maybe we don’t know how Hendrix wrote “Purple Haze,” but this movie, which contains precious few insights into his creative process, isn’t going to tell us.

Fortunately, the music-movie genre isn’t limited as Hollywood would like audiences to believe. Also, it helps with the authenticity factor when one’s subject is a living, willing participant. Lushly filmed by artists Iain Forsyth and Jane Pollard, 20,000 Days on Earth purports to be a day in the life of moody Aussie troubadour-screenwriter-novelist Nick Cave — but is really an experimental docudrama in disguise.

It opens with Cave, now in his mid-50s, getting out of bed and admitting in voice-over, that he “cannibalizes” everything that happens in his life for his songs. Thus begins an intimate look into Cave’s songwriting, a rambling adventure that includes studio sessions for 2013’s Push the Sky Away (including some goofing off — yes, he smiles!); a chat about his childhood with psychoanalyst Darian Leader; a meal with bandmate Warren Ellis; sorting through his career archives; and scenes of Cave driving around his adopted hometown of Brighton, visiting with cohorts (Kylie Minogue, Blixa Bargeld, Ray Winstone) who appear and disappear in perfect cadence with 20,000 Days‘ themes of memory, the art of performance, and storytelling.

“Who knows their own story? Certainly it makes no sense when we’re living in the midst of it,” Cave muses. “It only becomes a story when we tell it and re-tell it.” Jimi may have lacked the catharsis from a scene depicting its subject’s triumph in Monterey, but 20,000 Days builds to a Sydney Opera House gig in which Cave croons the songs we’ve seen him create, interspersed with footage of a younger Cave thrashing around the stage in pursuit of what the film vividly captures: “this shimmering space where reality and imagination intersect.” *