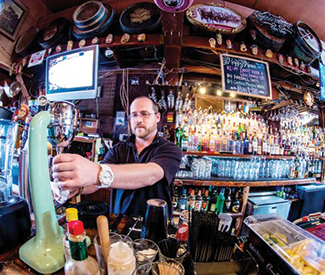 THE WEEKNIGHTER I have no idea why we were out in the Inner Sunset that night. I’m pretty sure we all lived in the Mission, but I could be wrong, it was at least 10 years ago. I just know there were like seven of us and just as we were about to leave the bar, another group of five of our friends, including Bhi Bhiman, randomly walked in. These kinds of things don’t really happen any more once you’re in your thirties in San Francisco. The tightknit group of people who you spent all your time with in your twenties are now scattered across the world and wrapped up in things like babies, and mortgages, and careers, and have better things to do than drag themselves through the city’s dive bars in the 1am darkness.

“Out of all the gin joints in all the world,” Bhi said, and I thought he was clever because, even though I hadn’t seen Casablanca yet, I knew it was something that people said and this was the perfect situation for it. We said our hellos and all shared a shot and when Tia, my girlfriend at the time, said she had to pee, I told her we’d meet her outside.

Five or six of us stood outside bullshitting as two really trashed guys walked swerving down the sidewalk. Just as they turned to head into the bar, Tia was walking out. One of them said something, threw his arms around her, and began pushing her towards the wall. She yelped “STU!” and those of us outside turned around immediately. When I threw him off her, the creep hit the door with a bang just as the rest of our large group was walking out. The other guy got in my face just as all 11 of my friends from both inside and outside the bar, surrounded the two of them. “The smartest thing you and Rapey Hands over here can do is leave right now,” I said, and they quickly scuttled the fuck away. I was glad for that, I didn’t want a 12-on-two beat down on my conscious.

This obviously has bears no reflection on Yancy’s (724 Irving, SF. 415-665-6551), the story just popped into my head. In fact, I fucking love Yancy’s. It’s got cheap drinks and smart-mouthed bartenders.

But for some reason my mind keeps coming back to that story. Maybe it’s because I’m tired of all the shit that the women I love have to deal with. Maybe it’s because I wish there always happened to be a group of 12 guys around to intimidate anyone who tries to sexually assault someone.

Maybe it’s just because certain things will always trigger certain memories and Yancy’s just happens to trigger this one in me. All I know is that the world is a fucked up place and that we have to look out for each other. If you see someone who looks like they might be in trouble, stop and ask if they are OK. If they aren’t, call the cops. If your friends are actually catcalling women, tell them that they are fucking creeps. When things go wrong don’t put the blame on the women involved.

And most importantly: Guys, stop being Rapey Hands.