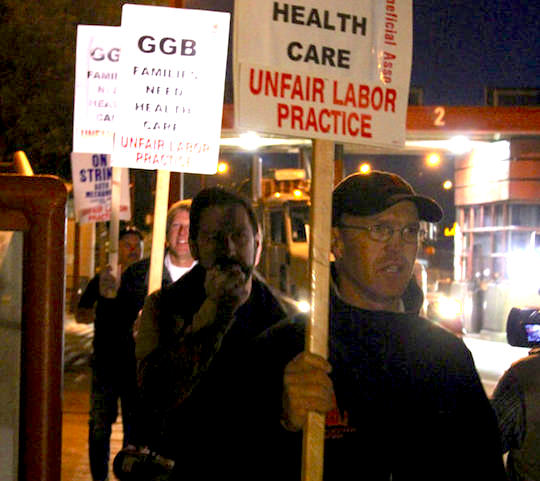 The Golden Gate Bridge Labor coalition announced it will strike this week, impacting commutes via bridge or ferries, and perhaps both.

Thirteen unions in the Golden Gate Highway and Transportation District are members of the coalition, whose talks with the district stalled today, representatives told us.

It is still unclear which unions in the coalition will strike, but commutes will definitely be affected, Alex Tonisson, co-chair of the Golden Gate Bridge Labor Coalition said.

“There’ll be an announcement in a day or two,” he told us. As to which unions specifically would strike, “I can’t say exactly who it will be right now, to be honest.”

“None of us wants to be on strike,” said Michelle Shalagin, currently a member of LiUNA!, Local 261 (Laborers) working on landscaping, in a press statement. “But what choice do we have? The District has not moved, and the raises they are offering are completely wiped out by the high cost of the healthcare premiums they are proposing.”

The district and the coalition are deadlocked over healthcare proposals. As we reported last week, the unions maintain that the cost of living in the Bay Area has skyrocketed. Housing prices are up, gas prices are up, everything is up. Though the district’s offer includes a 3 percent wage increase next year, and further increases in subsequent years, the new health care plan would cost 2 percent of workers’ wages, largely nullifying any increases.

The district posted a full response to arguments against their healthcare offer at its blog. The district argues the workers are paid higher than their counterparts in other districts. The unions say the other districts don’t have to contend with local cost of living burdens, warnings which representatives said are largely falling on deaf ears.

“The last strike was purposefully giving [the district] a warning another strike would happen,” Tonisson said. He was referring to last week’s iron workers strike, which garnered a bit of media attention, but for the most part did not move the needle on their contract negotiations. The two parties are still stalled on healthcare talks, despite the first “warning shot” picket line.

“This was their reaction,” Tonisson said. “The sense I had is they want us to strike.”

The impact of a strike depends on which of the 13 unions participate. Toll taking is now automated on the Golden Gate, but the unions still have options to affect commuters and garner attention. Workers changing the lanes on the bridge could snarl traffic during commutes, Golden Gate Transit drivers could strand bus-goers, and ferry workers could strand folks by the water.

“Imagine the backup on Lombard or Van Ness,” Tonisson said, referring to lane changers on strike. “It wouldn’t shut the bridge down entirely but it would make a mess of things.”

The real mess, though, is the state of the workers’ health care. But who’s willing to bet the public cares more about the snarled traffic than a thriving a middle class?

Below we’ve embedded a flyer from the union coalition, demonstrating its argument about cost of living and health care.