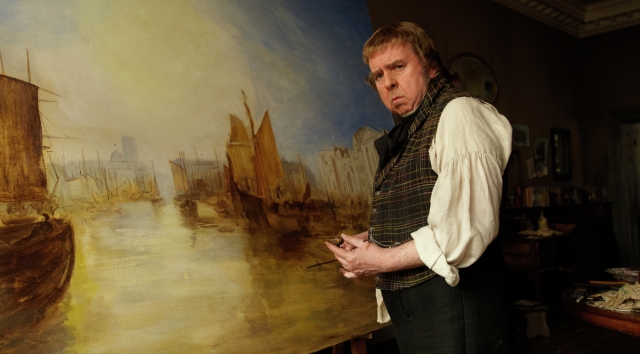 ** Working steadily for over 40 years, achieving more than 20 features, Mike Leigh has stayed true to his “kitchen sink realism” aesthetic. Contemporary audiences could all too easily take him for granted. His latest, Mr. Turner (UK), is a rigorous and immensely rewarding journey that explores the life of British artist J. M. W. Turner (1775-1851).

Spall won the award for Best Actor at this year’s Cannes Film Festival, not just for emulating Turner’s cartoonish and almost frightening physique, but also inhabiting and truly expressing the ghastly terror one struggles with after the death of a loved one. Recalling Jane Campion’s dazzling An Angel at My Table (1990), Leigh’s film places emphasis on the immense difficulties that an artists put themselves — and the others around them — through, and cinematographer Dick Pope (who has shot ten of Leigh’s films since 1990, and won a special jury award at Cannes for his work on Mr. Turner) gives every frame an almost spiritual look.

Clouds is deliciously layered with self-referential mirrorings of its stars’ real-life careers; it also contains ambiguity that left me talking to others about the film for days. The film was shot in 35mm, which is remarkably utilized during the many depth-of-field sequences in its Swiss-mountains setting.

** The Dardenne Brothers have added yet another stunning film to their collective résumé with Two Days, One Night (Belgium/France). The drama follows a woman (Marion Cotillard, in a stunning, panic-driven performance) as she desperately tracks down each of her fellow factory workers in hopes of saving her job, giving the audience an eye-opening look at the state of middle-class Belgian neighborhoods.

** Jean-Luc Godard’s Goodbye to Language 3D (France) offers a purposefully playful take on 3D, forcing viewers to constantly readjust their focal points toward not just the images but the subtitles as well. This fast and furious farewell to our language of the past (and present?) is overflowing with so much energy, it should be screened twice in a row.

** Ruben Östlund’s Force Majeure (Sweden/Norway/Denmark/France) lived up to its title when took this year’s Cannes Film Festival by storm, winning the Jury Prize in the Un Certain Regard section. This often surprisingly hilarious look at a Swedish bourgeoisie family slowly spills into much darker terrain, creating a minefield of gut-wrenching gender-politics. Similar to Julia Loktev’s gripping The Loneliest Planet (2011), director Östlund does an astounding job weaving through relationship expectations. With this being the Swedish entry for the Best Foreign Language Film at the 87th Academy Awards, hopefully someone local will program the filmmaker’s previous three films  — The Guitar Mongoloid (2004), Involuntary (2008), and Play (2011) — which look just as mesmerizing.

** Mia Hansen-Løve’s Eden (France), an ode to the 1990s Electronic Dance Music scene, received countless write-ups due to the fact that the film includes the members of Daft Punk in the film. This humorously parallels the movie’s story, as it follows a French DJ who created the “French Touch” but whose legacy — like many in every youth movement — fell short of success. This was definitely one of the hottest cinephile tickets of the festival, and those who were patient with this two-part, 131-minute odyssey were rewarded with quite a poignant punch.

The director made a splash with her hypnotic The Father of My Children (2009), which won the Special Jury Prize in the Un Certain Regard section at the Cannes Film Festival, and followed it up with the coming-of-age Goodbye First Love (2011). Eden has a built-in audience of EDM fans who will be educated on quite a number of unsung heroes from 1990s; added to that is the melancholic role played by Greta Gerwig, which should intrigue many non-EDM fans.