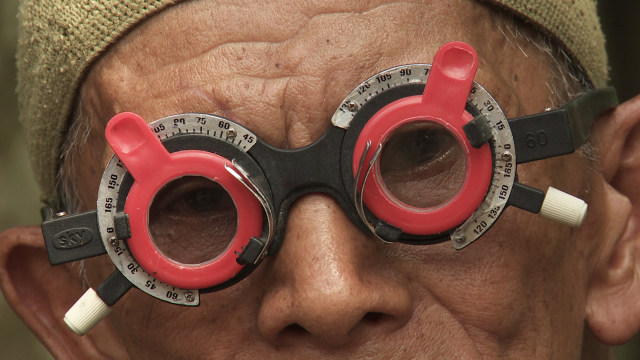 News broke earlier this week that Joshua Oppenheimer — the Texas-born, Copenhagen-based filmmaker who scored an Oscar nomination for 2012’s harrowing The Act of Killing — received a MacArthur “Genius Grant.” Not a bad follow-up to the Toronto screening of his latest Indonesia-set doc, The Look of Silence (Denmark/Indonesia/Norway/Finland/UK), which is both a direct sequel to Killing and a complete stand-alone work. Either way, it’s one of the most powerful documentaries I have ever experienced. (It’s due in theaters in summer 2015.)

In this film, Oppenheimer teams up with Adi — an optometrist whose older brother died in the mid-1960s Indonesian genocide — and tracks down former officials to confront them about their horrific actions. Each interview pits Adi against his darkest demon and it only goes deeper from there. The theater echoed with sobbing throughout the entire 98 minutes and reports say that all three screenings concluded in standing ovations (though everyone on my row needed time to recover emotionally before they could even move).

As in Killing, Oppenheimer’s co-director and countless crewmembers are credited as “Anonymous,” due to the risks they take by still living in Indonesia. Hailed (and executive produced) by Werner Herzog and Errol Morris, Silence is poised to earn Oppenheimer another Oscar nomination — and probably a win this time, too. But more importantly, it has the power to give a therapeutic experience to the many victims around the world of irresolvable atrocities.