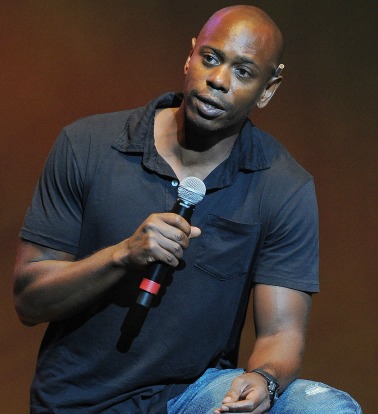 The first time I saw Dave Chappelle perform live was 10 years and three months ago, in a large, echo-y gymnasium at UC San Diego. It was my 20th birthday and I was so excited.

This was June of 2004, and the comedian was at the absolute peak of his Chappelle’s Show fame, which meant he suddenly found himself performing for sports arenas full of college kids who had neither the patience nor the decorum (nor the sobriety) to actually sit and listen to a standup comic performing material, choosing instead to holler “I’M RICK JAMES, BITCH!” or “WHAT!” and “YEAH!” in Lil Jon voices at random — in reference, of course, to their favorite Chappelle’s Show impressions. They did this without provocation or logic. They interrupted him constantly. They did not care. He was pissed. Every audience member who wasn’t doing it was super pissed.

Two weeks later, encountering a similar audience in Sacramento, he left the stage for two minutes, then came back and said: “This show is ruining my life. This is the most important thing I do, and because I’m on TV, you make it hard for me to do it. People can’t distinguish between what’s real and fake. This ain’t a TV show. You’re not watching Comedy Central…You know why my show is good? Because the network officials say you’re not smart enough to get what I’m doing, and every day I fight for you. I tell them how smart you are. Turns out, I was wrong. You people are stupid.”

Less than a year later, mid-production, he took off for South Africa and the show came to an abrupt end.

I have always felt a strangely personal guilt about this. I’m sorry about the idiots at UCSD, Dave, I have wanted to tell him. To this day, I can’t think of another instance in which such an intelligent brand of comedy has amassed such an astoundingly high percentage of morons as its fan base.

This being the case, I went into Dave Chappelle’s midnight performance at the Punch Line in SF last night (the fourth of four gigs in two nights announced Tuesday morning; he’ll do another one tonight at 10:30pm) with, well — I don’t want to say great expectations. But it’s a small club; I’ve heard great things about his smaller shows in SF over the past year or so, and I was ready for something like a redemptive Dave Chappelle experience.

“All of those 20-year-old idiots have grown up,” some part of my brain believed. “These shows sold out so quickly. These are super-fans. This will be great.”

“Hey Dave! HEY DAVE! Are you gonna get the iPhone 6?” (Blank stare of disbelief. “Uh, probably.”)

Have you ever cringed so hard in a public place that it takes all your strength not to actually pull your shirt up over your head and crawl under your chair? Imagine a club full of people sharing this feeling. Now sit with it. For four hours. Now add a two-drink minimum and stressed-out waiters serving mandatory drinks that mandatorily must be downed within the next 10 minutes because it’s 1:45 in the morning.

To be fair: Chappelle was asking for it, quite literally. He opened with some SF-centric bits — a story about how he got mugged for the first time ever in San Francisco, and it was by a gay man. There was a quick, sweet anecdote about hanging out with the “startlingly funny” Robin Williams at the Punch Line, followed by a thought about Joan Rivers (“Joan Rivers was a great comedian, the problem is, she died a couple days after Robin Williams. Great comedian, but that’s bad timing.”) And then the evening became a neverending Q&A session, with very loose interpretations of both Qs and As.

“What do you guys wanna talk about?” he repeated at least a half-dozen times, leaning forward on his barstool in a short-sleeve black button-up shirt (looking, yes, noticeably buff), chainsmoking an entire pack of yellow American Spirits that he stubbed out in succession on his sneaker, drinking tequila and Coronas, and, at one point, ordering shots for a couple in the front row.

Fresh from appearances the past couple months at the traveling Oddball Comedy Festival, Chappelle — who, most of the year, lives in a farmhouse in Ohio with his wife and three kids — acknowledged that he was using this handful of last-minute SF performances as “practice” before heading to Chicago this weekend, where he’ll host Common’s Aahh! Fest, with Lupe Fiasco, De La Soul, MC Lyte (!), and others. And either he was plain sick of repeating material he’d performed three times in the last 48 hours, or he doesn’t have any new material, because most of what he did last night — sorry, what he did this morning, from 12:30am until just shy of 5am — is not what most people would refer to as “material.” This is also likely one reason the most sober he appeared all night was in the couple instances he caught people holding their cell phones, which were strictly and clearly prohibited from the moment he walked on stage. (“YouTube ruins comedy.”)

Also to be fair, Dave Chappelle is one of the few comedians alive who could get away with straight-up, absolutely non-planned riffing for that long — on current events, on domestic abuse and football, on race relations, on Ferguson, on run-ins with OJ, on sex, on marriage, on fame and its perils — and actually, for the most part, hold an audience’s attention.

For all his sloppiness (the last half-hour or so was largely Chappelle realizing and vocalizing how badly he needed to pee), the man possesses a spark of something undeniably genius, and it’s most visible in his social commentary, when he lets himself get dark — like the running gag of him being a “quinoa-eating” black person, the kind that makes white people feel safe. Or like when he unleashed a lucid torrent of facts about the shooting of unarmed young black men in the US over the past three years, including the grossly under-publicized killing of 22-year-old John Crawford III by white cops in a Walmart in Chappelle’s home state of Ohio last week. Crawford had picked up a BB gun inside the store — a gun that was for sale, naturally, at Walmart.

“The store never closed! They haven’t even shown the tapes!” Chappelle said incredulously. “And the worst part is that you’re allowed to carry a gun in Ohio. I’ve gone to Denny’s packing a gun! (Pause.) I’ve had a lot of cash on me at certain points in my life.”

At times you could almost see the sharpest version of him shining through the beer and weed haze, gauging the audience’s temperature, seeing how much more serious and guilt-inducing shit a mostly white audience would tolerate, before bringing everybody back in with his (still excellent) white suburban neighbor voice or a dick joke punchline.

Around 4am, after maybe half the audience had left (“What if I just wait all of you out? I’m going to be the last one standing”) and Chappelle became less and less articulate, the pauses in his riffing got longer, as he (and we) sat listening to the sound of cars driving through freshly rain-washed streets outside. Everybody had gotten their dumb questions out, or else had gotten too drunk and indiscriminately yelled for a while and then had their embarrassed friends drag them home. It was awkward the way any straggler-at-the-party-at-4am interaction is awkward. A little bit like a hostage situation, but with an incredibly funny and intelligent albeit unfocused kidnapper.

“It will take you years to understand what happened here tonight,” he said with a self-deprecating laugh, as someone asked about his show tomorrow (tonight). “Oh yeah, it’ll be great,” he said. “You should come. Based on how it went tonight, you won’t hear this shit again.”

A: “Problem with that is, when you quit a show the way I did, networks don’t exactly trust you ever again. You realize I didn’t tell anyone I wasn’t coming in, I just left. So it’s like ‘Yeah, sure, I’ll see you Monday…'”

A: “My 5-year-old kid told me that I had a vagina on my back, with a butt for a mouth, with a hot dog in it. Five years old! I was like, the force is strong with this one. My wife got mad at me for laughing, but come on…I wasn’t even gonna laugh until the hot dog bit. He got me with the hot dog.”