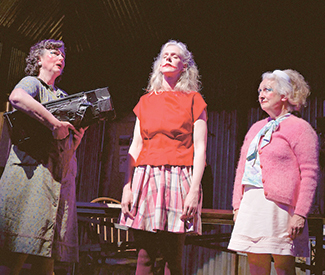 THEATER Ireland’s exceptional Enda Walsh may have gained wider attention and a bigger paycheck for his stage adaptation of indie film Once, but his real work for the stage is in more intricate little plays — far darker, funnier, and more polyphonous dramas like 1996’s Disco Pigs and 2007’s The Walworth Farce, the latter seen in Berkeley in 2009 when Cal Performances hosted Druid Theater of Galway’s superb production.

The New Electric Ballroom, currently up at Shotgun Players’ Ashby Stage in a Bay Area premiere, is something of a companion piece to The Walworth Farce. Written around the same time, it too revolves around the twisted and twisting routine of a vicious familial regime. This time it’s a fishy tale of three sisters in a kind of Chekhovian-Irish blend of suspended animation, crammed together in a tin-roofed shack (rendered in expansive detail by ever-impressive scenic designer Erik Flatmo) where together they replay the glorious promise and ignominious catastrophe of a night two of them experienced as teenagers and the other never experienced at all.

Claustrophobic and (presumably) foul-smelling, their little shack nevertheless transforms regularly into a paradisiacal nightclub as they relive its intoxicating crush of bodies, “and its tide of badly suppressed sex,” from the vantage of partial and incomplete memories.

Ada (Beth Wilmurt), at 40 the youngest sister, seems to sublimate her own deeply repressed desires in spurring on a longstanding feud between her older 60-something sisters, the racier Breda (Anne Darragh) and the still innocent Clara (Trish Mulholland), each of whom had eyes and more for some big-handed young man in the parking lot of the titular local nightclub of their youth. Together, they’re the ABCs of sex, though maybe in reverse order, enacting the daily ritual that is their torture and their solace, a purgatorial pause in the merciless flow of time.

Village loner and oddball Patsy (Kevin Clarke), meanwhile, forever proffering a tray of the day’s catch to this hostile household of shut-ins, is literally fishing for compliments, the poor bastard. In his rubber boots and rough clothes he presents himself with decorous care and insistent charm, like a seriously underappreciated only child.

But that’s in keeping with this little sadomasochistic community of private hells, in which characters take turns spilling out their lives to a mostly indifferent room. Indeed, you could almost think of the play as a series of monologues — beautifully written ones. Walsh has a gift for a subtly heightened vernacular. Unlike the self-conscious falsetto lyricism in so much new drama, it never cloys but rather sings out plainly in a gritty, open-throated pitch. These monologues are attention grabbers. But nearly as striking are the ominous, rueful, anticipatory silences they set off, like dark and slow-roiling waters tugged by the moon.

Although the play has a streak of wild and easy humor running through it, director Barbara Damashek leans toward the more serious side of things in her interpretation, emphasizing the dark corners to the point that they tend to look not all that dark. It might look otherwise were the humor more foregrounded and intense. The play seems to demand a manic, barely contained intensity that registers only weakly here — even the sight of older women made up in garishly exaggerated makeup and parading around in teenage garb lacks some of the macabre, obscene humor and pathos you feel it wants to contain. And it makes the play feel thinner, a bit reedy. Her actors, while highly capable, only intermittently produce the kind of deeply etched tensions between them that you’d expect from these obsessive and long-festering relationships.

This is still a worthwhile show, though, with solid acting doing service to a lively litany of punishing doubts and irrepressible hopes — until the flotsam of lost time finally washes ashore, electrifying (briefly) an otherwise dull, ruthless, and necessary domesticity. *