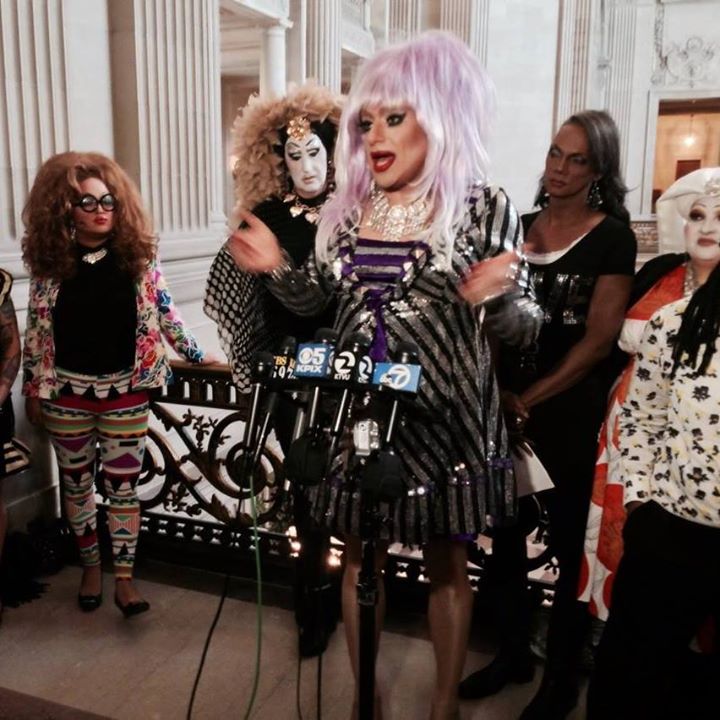 A cadre of drag queens, LGBT rights supporters and politicos trekked in their glamorous best to Facebook HQ today, to negotiate the reinstatement of Facebook profiles for those who don’t use their legal or birth names.

What’d they get? Bupkiss, zip, zero, nada, nothing – for now. But in a twist of Harvey Milk’s famous recant, perhaps they were given hope.

“We were glad they were willing to listen to us,” Lil Miss Hot Mess wrote in a Facebook post about the negotiations, which she attended. But she was “disappointed that [Facebook] reps weren’t willing to agree that this ‘real name’ policy is *flawed* or agree to a timeline to discuss solutions.”

As Heklina added shortly after, “they firmly gave us a vague commitment to meet again.”

Facebook did agree to reinstate some of the profiles they had deleted for using what they consider “not real” names, but only for two weeks, which Sister Roma called a “hollow gesture.”

And though some Facebook representatives at the meeting were from the LGBT community, none were in a position to make any changes, according to our sources. Prominent drag queens like BeBe Sweetbriar, Sister Roma, Heklina, Lil Miss Hot Mess, and others, as well as political figures like Gabriel Haaland, Harvey Milk LGBT Democratic Club Co-President Tom Temprano and Supervisor David Campos all stormed Facebook in style (star studded!), but Facebook’s representatives at the meeting were not necessarily empowered to do anything but sit, smile, and nod prettily.

“When we began the discussion it was clear the people there did not have the authority to make a policy change,” Campos told us. “We asked Facebook to set up a meeting with whoever it is who has that authority. They said they’d get back to us, and it seems like they’re open to it, but we haven’t gotten that call.”

We have reached out to Facebook, but did not hear back from them before press time.

The negotiations centered around not only Facebook’s policy of using birth names versus chosen names (and to shut down profiles of those who don’t comply), but also the enforcement mechanism used to “out” drag queens, and others using nom de plumes. Facebook maintains it was alerted by the community about the pseudonyms, which is a policy the company said was to report users who are stalkers, or frauds, using fake accounts. But that policy is intended to protect Facebook users from bullying. Now it’s being used to target drag queens and others.

Of course, there’s a big difference between outing a transgender teacher, and outing a cyber-bully.

Many drag queens were reported to Facebook around the same time, leading some in the community to call it a “targeted sweep.”

“It is enabling the very type of bullying they meant to prevent,” Gabriel Haaland, who was present for the negotiations, told us. “It was our hope we could convey how damaging the policy was, not just emotionally, but economically.”

Many of those whose names were swiped (or wiped) by Facebook were at the Harvey Milk LGBT Democratic Club’s meeting last night, including Lil Miss Hot Mess and Sister Roma.

Roma was nervous about the Facebook negotiations, she told us, and it’s easy to see why.

A few days ago her battle with Facebook was a personal one, she said. When the social media behemoth demanded she use her “real name” or delete her profile, Roma, a Sister of Perpetual Indulgence drag queen and fiercely vocal advocate for LGBT rights, knew what she was going to do: Rip the social media giant a new one.

But, she told the crowd of about 50 gathered at the Harvey Milk LGBT Democratic club, things change.

Roma appeared in pants and a t-shirt, not Sister of Perpetual Indulgence habit and veil. She may not have been draped in her pseudo-religious garb, but she was nonetheless humble. “When I started this it was about my online ego,” Roma said to the crowd. “But when we got so many emails, I realized it impacted so many people. It’s not just about a bunch of drag queens bitching.”

Roma and her drag queens sounded the alarm, but soon discovered that the issue of safety via online anonymity affects large swaths of the world.

Community members who spoke had many reasons for anonymity, but many shared a common theme: The need for online safety.

In respect of that right, while discussing their stories, we will only name those that granted their permission.

The first person to speak said she catered to wealthy clients in her chosen profession, but “I’ve been on the fringe of society since I was five,” she said, with noticeable trembling in her voice.

“If they saw what my life was like on Facebook,” she said, “I’d be out of a business.” But one need not work with deep-pocketed customers to want to keep their lives private.

“I’m a high school math teacher, I can’t use my full name,” one woman said to the crowd, and to Roma. “It’s a pretty ordinary life, but I can’t have my name on Facebook. I can’t have my students see me drink and curse.”

Another man, a person of color, said finding a job with a “black name” is hard enough as it is. Even worse, “HR people look through Facebook for potential hires,” he said. “This is [policy] racist, and heteronormative.”

One woman said her father was from Oregon, a prominent government official who helped take down the state’s Klu Klux Klan. He “received death threats all my life,” she said, and uses a fake name to evade being tracked on Facebook. If someone reported him, he’d be ousted to those who wanted him dead.

The room was especially silent when one man, slender and tall, spoke about his need for a new identity.

“Aaron Barber was sexually molested from the ages of six to eighteen. Aaron Barber is who I am not,” he said, pointedly. “Element Eclipse is who I am. I wear high heels. I get bull whipped at Folsom (Street Fair). I am a freak, but we are all one.”

Element Eclipse took his new name when he became part of the Radical Faerie community, a group that recently suffered the death of one of its own: Feather, who was found beaten on Church street. Many suspect Feather’s death was a hate crime, heightening lingering fears in the Faerie and LGBT community.

The journey to equality is intertwined with safety, and neither are fully realized yet. That’s what Facebook heard from the community today, and if they do not respond to those needs, the Sisters of Perpetual Indulgence are calling on the community to take to the streets to protest.