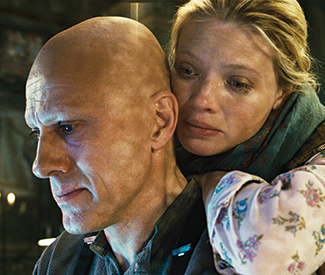 FILM The New York Times called Col. Hans Landa — the sinister yet gleefully polite Nazi played by Christoph Waltz in Quentin Tarantino’s 2009 Inglourious Basterds — “the ultimate Tarantino creation.” In the same article, Tarantino admitted that if he hadn’t found the perfect person to play Landa, he wouldn’t have made the film at all. (Can you blame him?) The supremely likable Waltz’s elevation from German TV regular to movie star was cemented when he won Best Supporting Actor for the role. Three years later, he picked up a matching statuette for Tarantino’s Django Unchained. (In his acceptance speech, he called Tarantino a “hero” — can you blame him?)

Waltz’s ability to play loquacious characters — some evil, some crusading for justice on horseback — is undeniable. But how has this actor, having been handpicked to portray characters tailored to his strengths, fared beyond Tarantino? It’s been a mixed bag. In 2011, he did bad guys three ways, in three forgettable films (The Green Hornet, Water for Elephants, and The Three Musketeers). His best that year was Roman Polanski’s Carnage, as a tightly-wound father who’d rather check his BlackBerry than worry about his son.

His next test comes with Terry Gilliam’s The Zero Theorem. The script was penned over a decade ago by Pat Rushin, a Florida creative writing professor. Its dystopian themes mirror Gilliam’s Brazil (1985) and 12 Monkeys (1995); an overt dig at The Matrix (1999) reflects the era in which it was written, although it’s presumably been updated to include more current-day themes, like technology’s ability to foster faux relationships and extreme loneliness.

Waltz, as gleamingly bald as his Oscars, plays computer whiz Qohen, one of “the most productive number crunchers” at mega-corp Mancom. Qohen is a stress case who dreams about black holes and refers to himself using plural pronouns, as in “We are dying.” (The affectation is as annoying to Theorem‘s other characters as it is to the viewer.) His immediate supervisor (a bewigged David Thewlis) refers him to the enigmatic “Management” (a bewigged Matt Damon), who allows Qohen to work from his home — an old church quirked up to the extreme, because, as the film’s press notes hilariously understate, “a very high standard of production design is expected from every Terry Gilliam film.” (The film’s slender budget means that most of the film takes place in this location.)

This privilege comes with a price, and Qohen is tasked with a “special project:” solving the titular theorem, a maddening beast that would drive even a stable person insane. His madness is in no way assuaged by “Dr. Shrink Rom,” his virtual psychiatrist (a bewigged Tilda Swinton), though he does get some help from Management’s genius teenage son (Lucas Hedges), who shows up at Qohen’s man cave of despair to eat pizza and share his own thoughts on the “Zip-Tee.” There’s also a romance — with Mélanie Thierry, resplendent in virtual-reality beachwear — though it proves no more “real” than anything else in Qohen’s world. Ultimately, despite Waltz’s heavy lifting (and not-infrequent nudity), Theorem sputters to sustain all its many whirring parts, including those that attempt to convey deep thoughts about the meaning of life. Maybe the meaning is “don’t overthink it.”

As for Waltz, his future slate contains a few worrisome choices (the fifth Pirates of the Caribbean movie? Nein!), but also some intriguing ones. This Christmas brings Tim Burton’s Big Eyes, scripted by the duo who penned Burton’s 1994 Ed Wood, in which Waltz and Amy Adams play kitsch-art impresarios Walter and Margaret Keane. To paraphrase Waltz’s Django Unchained character, how could you resist? *