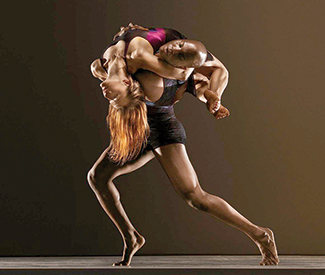 DANCE Liss Fain borrowed the title of her most recent installation — the wondrous The Imperfect is Our Paradise, Sept. 11-14 at ODC Theater — from Wallace Stevens. But the work’s inspiration was William Faulkner’s 1929 novel The Sound and the Fury, an often stream-of-consciousness study of the Compson family in Jefferson, Miss. She employed fragments of the text, not unlike previous works in which she explored the words of Jamaica Kincaid, Virginia Woolf, and Lydia Davis.

For Imperfect, Fain turned again to previous collaborators Matthew Antaky (installation design), Frédéric Boulay (projection design), and Mary Domenico (costume design — great, ratty overalls), as well as composer Dan Wool, who has a lovely habit of including into his own scores a quote from classical music. They feel like nods to another world.

Fain now also has a fine, stable ensemble that beautifully realizes her strong, formally contained choreography. Returning dancers Jeremiah Crank, Katharine Hawthorne, sisters Megan and Shannon Kurashige, and Carson Stein were joined by Gregory DeSantis and Aidan DeYoung. They lent a workmanlike, stoic sense of inevitability to their performances, whether staring into the void or ensnaring partners every which way. This was true ensemble work.

Imperfect communicates with its intelligence, clarity of purpose, and rich, tight choreography. Antaky added his magic by designing 12 panels that hung high above the audience on all four sides. They first suggested a sense of enclosure with brick walls, then threats from nature, stockade-like fences, and finally a dead house on a hill. The stage floor looked like dry dirt, or as if covered with leaves. It made me think of Benjy, the Compsons’ disabled son, who loved the smell of trees.

About the use of Faulkner’s text, I am of two minds. In voiceover, it was often more difficult to decipher than, for instance, actor Val Sinckler’s live performance in the Kincaid-inspired work. If text is used, it should be comprehensible. That’s why it’s there. At the same time, those fragments I did catch — primarily those from Quentin, the book’s most contemporary and most tragic character — pulled me away from Fain toward Faulkner’s narrative, such as it is. I thought it distracting rather then illuminating.

Since Fain encourages audiences to walk around the perimeter of the stage, though few people do, she meticulously designed her choreography from the periphery, into and out of the center space. In the beginning, the dancers stood immobile, staring into the void, before slowly coming to life and offering us different perspectives of themselves. I expected characters to emerge, but they didn’t.

With the exception of Hawthorne, who throughout remained something of a wild card, this was a homogenous group that was caught in what was perhaps a common dilemma. The title’s slippery Imperfect refers to something flawed, but grammatically, it also references past actions that are finished in some languages; in others, they project into the present. If Fain had overreaching themes in mind, they might have been time and memory, past and present.

The choreography asks for strength with lots of elaborate partnering — mostly male to female, yet without a trace of romantic intent. These dancers engage each other almost impersonally as something that is inevitable and that will be repeated for who knows how long. Despite the few unisons — some triple duets, a few one-on-ones — Imperfect has a churning sense of commonality about it. An arabesque can turn into a backward somersault and end between a partner’s leg. The dancers engage each other by rearranging body parts — an elbow here, a foot there — and flipping in every direction. They entangle their bodies, lift and drop them. Often they sink to the floor but pneumatically rise again.

As she has in the past, Fain makes prominent use of the arms. People yank and pull at them like tug of wars. But they also lock elbows, as if going for a stroll, but then immediately slip out of this companionship into more robust moves, becoming burdens which can be dropped or gently let go.

When Wool introduces Bach, the tall and elegant Hawthorne and Crank look like they remember the ballroom decorum of an earlier era. If there is one “character” it is Hawthorne, an astoundingly versatile and detailed dancer. She can stand on the sidelines as if watching for a prey, with a single gesture break up a couple, and again and again tear across the space sweeping the floor clean with her tornado-like whipping turns, pleading arms reaching for the light.

With Hawthorne in control, you get the sense that Imperfect contemplates time — past and time as it is passing. It may all stem from Faulkner, and the watch that the Compson family patriarch gives to Quentin, his oldest son. *