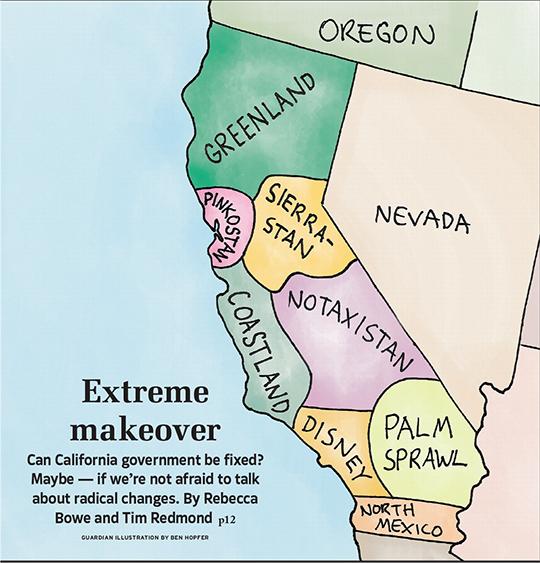 While we at the Bay Guardian have long been intrigued by the possibilities of splitting California up into several states — the Bay Area could be an economic powerhouse with compassionate social services and modern infrastructure, while conservative counties would have low taxes but crumbling roads and bridges — we’re happy to hear the news that venture capitalist Tim Draper’s proposed six-state solution has failed to qualify for the ballot.

The most ridiculous part of Drapers’ initiative, which he spent more than $5 million on but fell short of the requisite number of signatures from registered voters, was his plan to call the Bay Area’s state “Silicon Vally” — showing just how arrogant and out-of-touch these tech titans can be. Hey buddy, I hate to break it to you, but the world doesn’t really revolve the tech industry, and it’s just stupid to name a state after a chemical element.

Personally, I have a long history of covering the idea for splitting up California, starting in 1991 when I covered Lassen County’s threat to secede from California because of its difference with urban areas for the Lassen County Times, a story that then made international news.

Then-Assemblymember Stan Statham used that media spotlight to introduce advisory measures on the question of splitting California up into three states, an idea that voters in 31 counties in the state voted on in election of 1992, most of them approving of the idea.

But unlike the dozens of other times in California history when the idea of splitting up the state was raised — the most serious effort coming in 1941 when the rural northern California counities declared themselves Jefferson State and set up a highway checkpoint, only to have the movement lose stream when Pearl Harbor was bombed three days later — Draper’s measure just seemed like a vanity project from a clueless rich dude.