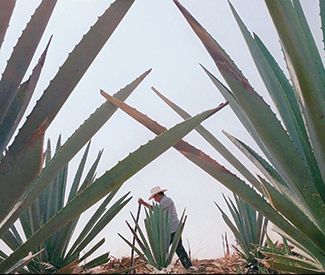 FOOD AND DRINK If you’ve ever tasted a fine mezcal, you know it’s a special thing. Bright, complex, spicy, smooth, smoky, minerally — mezcal is a spirit bursting with character. So it’s no wonder that after more than four centuries of distillation, it’s picked up its share of catchphrases. “Para todo mal, mezcal; para todo bien, también.” (For everything bad, mezcal; for everything good, the same.”) “Sip it, don’t shoot it.” “You don’t find mezcal; mezcal finds you.”

Mezcal seems to be finding a lot of people these days. In San Francisco, restaurants like Loló, La Urbana, and Nopalito — even Magnolia’s Smokestack, a brewery and BBQ spot — have lengthy lists of some of the world’s best mezcals, while cocktail bars would be hard-pressed to not have at least one mezcal drink on the menu. “It’s slow food, made the artisanal way, the way it’s always been made,” says Judah Kuper, a Coloradan who runs the brand Mezcal Vago with his friend and his father-in-law in Oaxaca, the southern Mexican state in which the bulk of all mezcal is made.

Produced in the traditional manner, the way Kuper’s fifth-generation maestro mezcalero father-in-law makes it, mezcal is an expression of true beauty—its basic ingredients quite literally earth, fire, and water. A predecessor to tequila (which is technically a type of mezcal, with its own protected denomination of origin), mezcal is essentially any distillate of the agave plant — although it can only be labeled as such if it’s made in one of eight designated Mexican states.

Its makers (mezcaleros) hand-harvest the heart (piña) of the agave (maguey, as it’s more commonly known in Mexico), roast it underground in earthen pits, crush it by hand or with a beast-drawn millstone, ferment its fibers and juices in wooden vats with airborne yeasts and water, and distill it in clay or copper stills, where it eventually drips off at about 45-55 percent alcohol by volume. These farmyard palenques are small operations, and many of their mezcaleros produce only a few hundred liters per year, making for a very unique and rare product, each batch different from the last.

Today, you can still buy extremely complex, completely organic, artisanally crafted mezcal on the roadside in Oaxaca for a few dollars a bottle. But that may not last forever.

San Francisco’s Raza Zaidi has only been selling his Wahaka Mezcal brand since 2010, yet he’s seen his sales double year over year, and now he can hardly keep up with the demand. His spirits come in at an easier-to-imbibe 40-42 percent alcohol, making them a smooth entry point for those just dipping their toes into the mezcal world, but they still handily hold their own against the more potent stuff.

In the next year, he expects to ship about 32,000 bottles of five different types of mezcal from Wahaka’s palenque in San Dionisio Ocotepec, Oaxaca, all overseen by one maestro mezcalero, an equal partner in the company, who also grows all of his own maguey. Demand outpacing supply is a good problem for any business to have, but Zaidi is concerned nonetheless.

“There’s definitely [an agave] crisis right now. So at the end of this year, we’re going to have to buy from other farmers,” he admits. “The demand and growth was way larger than we expected.”

Mezcal is artisanal by nature, so it isn’t easy scale up. Agave — even its most common, cultivatable espadín variety — needs a minimum of seven years to mature. Some wild species can take upwards of 25 years to ripen, and their management and harvest-rights allocation usually fall to the tiny rural communities on whose property those plants lie.

Over centuries, mezcal’s legacy has been sustainably built around a spiritual and ecological balance of only harvesting what you need, when you need it (for weddings, festivals, funerals, the todo bien and the todo mal) — not for industrial production. But that hasn’t stopped large-scale spirits companies from trying. Bacardi just added Zignum, Oaxaca’s biggest factory producer of mezcal, to its distribution portfolio. Jose Cuervo is rumored to be following suit. And if that doesn’t sound bad enough, Toby Keith (who presumably didn’t get the “sip it, don’t shoot it” memo) has his own mezcal brand called Wild Shot, whose marketing team frequently employs the hashtag #BLAMEITONTHEWORM.

Drive through the mountains an hour or two outside of Oaxaca City, and you wouldn’t know that an agave shortage is afoot. Agave is seemingly everywhere — lining the roads in clusters, poking out of craggy hillsides, and planted row upon row in fields. But people on the ground there tell a different story.

My tour guide described how each week more and more trucks from the country’s tequila-producing region have been coming down and carting away whatever maguey they can get their hands on, no matter the type or age. This practice not only defies tequila’s own rules and legal standards for production (that it only be made from blue Weber agave, and that it’s grown in Jalisco and some small areas of nearby states), it ravages many Oaxacans’ livelihoods and taxes the region’s immensely complex ecosystem, maybe irrevocably so.

Mezcal’s uptick in popularity isn’t insignificant to its own future, by any means, but the spirit only represents a one percent drip in the still of tequila’s massive 300 million-liter-per-year output. And last year China lifted its ban on tequila importation, spurring even more demand for the mystical maguey.

On a recent trip to visit his uncle, Salomon Rey Rodriguez, who employs an ancestral method of hand-mashing agave and distilling in small clay pots, Kuper noted, “I came around the corner and saw a whole mountainside of agave that had been wiped out by Jalisco the day before. The agave wasn’t even ripe, and that hillside represented what would have been five years of work for Tío Rey.”

While mezcal has made huge strides to shed its reputation as tequila’s “poor country cousin,” in the socio-political sense it still is. Oaxaca is one of Mexico’s poorest states, and the agave shortfall is pitting farmers and mezcaleros against themselves and their communities, forcing them to choose between selling off their agave to tequileros long before it should be harvested or letting their families go hungry.

“There is a nest of issues that boil down to the question of whether Mexico wants to copy the industrialized tequila industry or foster the growth of an industry and product line that expresses the diversity of the agriculture at its base, the many different ideas of the people making the mezcal, and provides a living to a wide swath of society,” says Max Garrone, who co-authors a blog called Mezcalistas with Susan Coss. On Sun/14 at Public Works, Garrone and Coss will host Mezcal: Mexico in a Bottle, which will serve as a tasting extravaganza and summit for all matters mezcal.

“We try to tell [mezcal’s] story on several levels,” says Coss, “How it is produced, the stories of the people producing it, what issues there are impacting the industry — all in the hope to get people to love mezcal and everything it stands for as much as we do.”

MEZCAL AT A CROSSROADS

So what can be done to combat the crisis? Reforestation seems like an obvious place to start. Wahaka not only bought a plot of land for that purpose, but also started a nonprofit, Fundación Agaves Silvestres (Foundation for Wild Agave), to further the cause. “Our philosophy is, if we’re taking away from the land, then let’s give back,” says Zaidi, who’ll be both pouring his mezcal and speaking about the spirit’s history on one of many panels at Mexico in a Bottle. Wahaka grows its typically wild madrecuixe and tobalá varieties from seed, and after a couple of years, replants them in the mountains during the rainy season, in accordance with the strict environmental conditions under which these plants naturally flourish.

“What this comes down to is supporting the artisanal producers,” says Rachel Glueck, a former San Francisco resident and Nopa employee, who is in the process of starting a socially conscious mezcal brand with her husband in Mexico. “Finding a way to help these small mezcaleros register their product and sell it would be huge, because if they’re doing that, then they’re not going to feel like they need to sell their maguey to these industrial companies to make some money.”

Mezcal is really at a crossroads, she says. “Tequila was originally an artisanal product, but it became industrialized, and you look at the quality of tequila — it’s mono-cropped, it’s full of pesticides, it’s cloned from clones of clones of clones, and now the agave is really weak.”

But for all of these artisanal producers, there’s still a kernel of hope when it comes to building a new model for mezcal’s sustainability. “We’re kind of fortunate to have the tequila industry to study,” says Kuper. “But at the same time, never have consumers been more aware of what they’re putting in their bodies and where it comes from.”