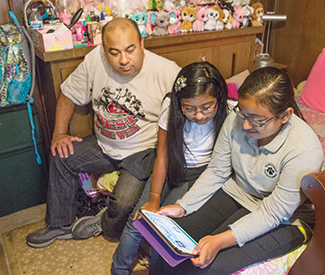 For the digitally connected, sometimes it’s hard to remember life without the Internet.

Bills can be paid with a click, calendar appointment reminders pop in our e-mail inboxes, and YouTube lessons teach us mundane tasks like faucet fixing (was I the only one who didn’t know how to do that?). And those are some routine, everyday ways we weave the online world into our offline routines. Some, especially in San Francisco, spin a wider digital web.

Valencia Street is a corridor rife with the technorati, our new digital overlords and neighbors. These folks are the titans that technology built. Facebook CEO Mark Zuckerberg lives within spitting distance of Dolores Park, for instance. On any given night, a large swath of drunken revelers sobering up at Tacolicious are the same ones who “change the world” every day, engineering the newest Google spy machine.

Data on who is connected and who is not is spotty, but taken together, it paints a picture of a stark digital divide.

According to a Field Poll in July, conducted on behalf of the California Emerging Technology Fund, one in four Californians does not have broadband Internet access. The city by the bay fares somewhat better, as local surveys say nearly 10 percent of San Franciscans do not have broadband Internet access at home. No DSL, no cable, no Comcast, no Federal Communications Commission woes. Ask them their opinion on net neutrality, and they’re liable to ask you if you’re a fisherman in need of tightly woven rope.

A study recently released by the San Francisco Unified School District shows 15 percent of children’s families don’t have broadband Internet on computers at home, and that percentage widens when looking just at African American or Latino families.

To be sure, 10-15 percent of San Franciscans is a small proportion. But percentages can be deceiving, as that translates to some 80,000 people who don’t have home access to broadband.

And as the city slowly builds new wireless solutions to help everyone connect to the web, a nonprofit group, the Mission Economic Development Agency, is working to expressly help families in the Mission connect online.

They’re working one by one, family by family.

Sandoval is a jovial guy, quick to smile. It’s easy to see why, as he is blessed with two equally sweet daughters, Gabrielle, 11, and Gisselle, 9, and his wife, Jaqueline. As soon as we stopped by, she swooped in with cake and Salvadoran strawberry juice she seemingly whipped up from thin air.

In 2012, Sandoval was in his 12th year working for State Farm Insurance, just before they laid off thousands of workers, including Sandoval. He had a rough time of it, having never been laid off before. His wife took care of the family, and eventually he bounced back. Now, he drives a taxi in the city, but the taxi industry is also going through a rough patch, and the family of four counts every penny.

Signing up for Internet seemed like a luxury they could not afford. The first time they tried it, this year, they had to make sacrifices.

“I was worried about the monthly payment,” Sandoval told us. “When I found out from AT&T that it was going to be $48 a month, I switched the policy on my car. I lowered the insurance to be just liability. I used to have full coverage.”

But even that didn’t help. After two months, Sandoval had to pull the plug. That’s when he met Leo Sosa, the Mission Economic Development Agency’s technology training coordinator.

Sosa hooked Sandoval up with an Internet plan through Comcast, part of a deal MEDA helped craft. The cable giant offers a $10 a month plan, with six months free, for residents who live within the Mission Promise Neighborhood, a section of the Mission targeted for aid by the federal government. The federal government funnels grant money straight to the Mission Economic Development Agency, which trains hundreds of local Mission residents in entrepreneurship skills, English, and digital literacy.

MEDA’s newest endeavor is signing folks up with the Internet, and it’s off to a fast start.

Since MEDA started the project in April 2013, it has connected 362 Mission Promise Neighborhood families to the Internet.

Some families may have Internet access through smart phones, but a July survey by the SFUSD shows less than 40 percent of Latino and black families have an Internet-enabled computer at home. The numbers are only slightly better for Asian families.

The problem, educators and advocates say, is smartphones aren’t enough to get an Internet-powered boost in school.

“It’s an incredibly adaptive use of technology to write a paper using a smartphone,” Richard Abisla, who has worked for three years at MEDA, told us, “but we don’t want there to be two classes of kids: ones with access to educational tools and ones without.”

Abisla worked to connect many of these families, aiming to give children better computer access. For Sandoval’s family, that’s already happening. The Internet and the subsequent computer he bought help his kids write their homework at home, and he said their grades have started to improve.

“We just started!” Gabrielle told us, excited to use computers in school for the first time. “We’re going to do our work and use our flash drive, and take it home to finish.”

This is the nature of school today: Those with Internet-connected computers can connect to the world’s knowledge, those without are in an information blackout. And how you connect to the Internet dictates what information you seek. Surveys from the CTEF show people connected to the Internet at home through computers, rather than phones, are more likely to seek government services (like health care), to take online classes, and to help their children research schoolwork.

Internet access through a computer, then, is a big lift to economic mobility. Until a few months ago, the Sandoval sisters would not have had that luxury, a clear scholarly disadvantage.

Gabrielle pulled up a YouTube video explaining PEMDAS: Parentheses, Exponents, Multiplication, Division, Addition, and Subtraction, the order of mathematical operations. Gabrielle told us the teachers on YouTube sometimes explain things in a way her teachers at school may have missed, and the videos also let her get a jump on lessons to help prepare her for what’s to come.

And we couldn’t help but smile as she and her younger sister explained how Giselle learned spelling by Googling different animals, then tallying the number of vowels and consonants in a word puzzle for school.

They now access the Internet at home mainly through an iPad. But we would not do our journalistic duty if we did not ask the girls to level with us. Honestly, we asked, “Why did you want the tablet?”

“Games!” the two sisters shouted, smiling, before launching into a treatise on a fashion app that would put scholarly papers to shame.

The Sandoval family and many others in the Mission are connected thanks to MEDA, but the effort to help others in San Francisco do the same is far from over.

Now, the pulses of light will deliver the net to our parks, and other city residents, in new projects set to be completed in the next few months by the city’s Department of Technology.

As spokesperson Ron Vinson is quick to point out, there is now free city-provided wifi access all along Market Street.

“Market Street was a focus because we have residential units, nonprofits, small businesses, banks and corporations, the homeless and people just recreating, and tourists,” Vinson told the Guardian. “It’s the full gamut of everyone in SF.”

Vinson admits there are gaps in the city’s service at this point, but he has much hope that they can be bridged. In the coming months, San Francisco will complete its newest city survey, in which the Department of Technology hopes to zero in on remaining San Franciscans without Internet access.

The agency has already made much progress. Through partnerships with single room occupancy hotels, elder care homes, and other neighborhood hubs, many low-income San Franciscans are now web-connected, thanks to the city.

The technology department’s newest project has Vinson talking like a giddy tech geek.

“We’ve got a five megabit upload and download coming,” he said, of the city’s newest project: connecting city parks to wifi. More than 30 of San Francisco’s green spaces will now be connected to the web, a project that should be finalized in the next few months.

“Especially in the park, man, you have kids taking photos and families using their tablets and the whatnot, but now they don’t have to use those expensive data plans,” he said.

Its also a boon to the homeless and anyone who is out in a public park using wifi. Though Golden Gate Park will not be one of the connected green spaces, Vinson said, because “that’s a project in itself, with its own complex topography.”

That aside, the park wifi “benefits everyone,” he said. “Until the day when everyone can get online, we won’t stop.”

Vinson is thankful for MEDA, which he’s worked with for 15 years, because the nonprofit’s employees feel much the same way.

“I remember showing someone Yahoo for the first time,” Abisla told the Guardian. “I said type whatever you want. People say ‘What do you mean?’ We’re going over searching in the browser. I say, ‘Name a celebrity.’ They say ‘Britney Spears,’ I say fair enough. Then a search comes back and there’s writing about her in Spanish.”

“People really realize, wow, I can look up anything in the world.”