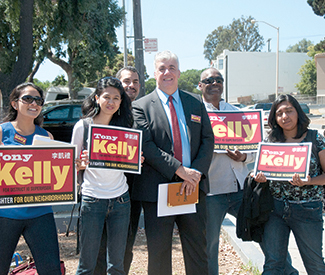 Although there are five seats on the San Francisco Board of Supervisors up for reelection this fall, incumbents face few contenders with the requisite cash and political juice needed to mount a serious challenge. The one race that has stirred interest among local politicos is the bid to represent District 10, the rapidly changing southeastern corner of San Francisco that spans the Bayview, Hunters Point, Visitacion Valley, Dogpatch, and Potrero Hill neighborhoods.

Sup. Malia Cohen, who narrowly beat an array of more than a dozen candidates in 2010, has raised way more money than her best-funded opponent, progressive neighborhood activist Tony Kelly, who garnered 2,095 first-place votes in the last D10 race, slightly more than Cohen’s, before the final outcome was determined by ranked-choice voting tallies.

For the upcoming Nov. 4 election, Cohen has received $242,225 in contributions, compared with Kelly’s $42,135, campaign finance records show. But Kelly, who collected the 1,000 signatures needed to qualify for the November ballot and qualified for public financing, has secured key progressive endorsements, including former Mayor Art Agnos, Assemblymember Tom Ammiano, Sups. David Campos and John Avalos, and the Potrero Hill Democratic Club.

Others who’ve filed to run for this office include Marlene Tran, a retired educator who has strong ties to families in the district, especially in Visitacion Valley, through her teaching and language-access programs (she’s known by kids as “Teacher Tran”); Shawn Richard, the founder of a nonprofit organization that offers workshops for youth to prevent gun violence; and Ed Donaldson, who was born and raised in Bayview Hunters Point and works on economic development issues. DeBray Carptenter, an activist who has weighed in on police violence, is running as a write-in candidate.

But the outcome in this dynamic district could be determined by more than campaign cash or political endorsements. That’s because the D10 supervisor faces the unique, unenviable challenge of taking on some of the city’s most intractable problems, which have disproportionately plagued this rapidly changing district.

Longstanding challenges, such as a high unemployment and crime rates, public health concerns, social displacement, and poor air quality, have plagued D10 for years. But now, fast-growing D10 is becoming a microcosm for how San Francisco resolves its growing pains and balances the interests of capital and community.

While candidate forums and questionnaires tend to gauge political hopefuls on where they draw the line on citywide policy debates, such as Google bus stops or fees for Sunday parking meters, neighborhood issues facing D10 have particularly high stakes for area residents.

While other supervisors represent neighborhoods where multiple transit lines crisscross through in a rainbow of route markers on Muni maps, D10 is notoriously underserved by public transit. The high concentration of industrial land uses created major public health concerns. A Department of Public Health study from 2006 determined that Bayview Hunters Point residents were making more hospital visits on average than people residing in other San Francisco neighborhoods, especially for asthma and congestive heart failure.

Unemployment in D-10 hovers near 12 percent, triple the citywide average of 4 percent. Cohen told us efforts are being made on this front, noting that $3 million had been invested in the Third Street corridor to assist merchants with loans and façade improvements, and that programs were underway to connect residents with health care and hospitality jobs, as well as service industry jobs.

“The mantra is that the needle hasn’t moved at all,” Cohen noted, but she said things are getting better. “We are moving in the same downward trend with regard to unemployment.”

Nevertheless, the high unemployment is also linked with health problems, food insecurity — and violence. In recent months, D10 has come into the spotlight due to tragic incidents of gun violence. From the start of this year to Sept. 8, there were 13 homicides in D10.

Fourth of July weekend was particularly deadly in the Bayview and D10 public housing complexes, with four fatal shootings. Cohen responded with a press conference to announce her plan to convene a task force addressing the problem, telling us it will be “focused on preventing gun violence rather than reacting to it.”

The idea, she said, is to bring in expert stakeholders who hadn’t met about this topic before, including mental-health experts and those working with at-risk youth.

“I think we need to go deeper” than in previous efforts, Cohen said, dismissing past attempts as superficial fixes.

But Cohen’s task force plan quickly drew criticism from political opponents and other critics, including Sheriff Ross Mirkarimi, who dismissed it as empty rhetoric.

“How many people are cool with yet another task force?” Kelly said in a press statement challenging the move. “We can’t wait any longer to stem the deadly tide of violence in District 10. Supervisor Cohen’s task force won’t even propose solutions till 2017. We can’t wait that long.”

Kelly told us he’s formulated a five-point plan to tackle gun violence, explaining that it involved calling for a $10 million budget supplemental to bolster family services, reentry programs, job placement, and summer activities aimed at addressing poverty and service gaps. Kelly also said he’d push for a greater emphasis on community policing, with officers walking a beat instead of remaining inside a vehicle.

“How do you know $10 million is enough?” Cohen responded. “When you hear critics say $10 million, there is no way to indicate whether we’d need more or less.” She also took issue with the contention that her task force wouldn’t reach a solution soon enough, saying, “I never put a timeline on the task force.”

Cohen also said she wanted to get a better sense of where all of the past funding had gone that was supposed to have alleviated gun violence. “We’ve spent a lot of money — millions — and one of the things I am interested in doing is to do an audit about the finances,” she said.

She also wants to explore a partnership with the Guardian Angels, community volunteers who conduct safety patrols, to supplement policing. Cohen was dismissive of her critics. “Tony was not talking about black issues before this,” she said. “He hasn’t done one [gun] buyback. There’s no depth to what any of these critics are saying.”

Tran, who spoke with the Guardian at length, said she’d started trying to address rampant crime in Visitacion Valley 25 years ago and said more needs to be done to respond to recent shootings.

“There was no real method for the sizable non-English speaking victims to make reports then,” Tran wrote in a blog post, going on to say that she’d ensured materials were translated to Chinese languages to facilitate communication with the Police Department. “When more and more residents became ‘eyes and ears’ of law enforcement, community safety improved,” she said.

Richard, whose Brothers Against Guns has been working with youth for 20 years and organizing events such as midnight basketball games, said he opposed Cohen’s task force because it won’t arrive at a solution quickly enough. He said he thought a plan should be crafted along with youth advocates, law enforcement, juvenile and adult probation officers, and clergy members to come up with a solution that would bolster youth employment opportunities.

“I’ve talked with all 13 families” that lost young people to shootings this year, Richard said, and that he attended each of the funerals.

Standing outside the Potrero Terrace public housing complex at 25th and Connecticut streets on a recent sunny afternoon, Kelly was flanked by affordable housing advocates clutching red-and-yellow “Tony Kelly for District Supervisor” campaign signs. The press conference had been called to unveil his campaign plan to bolster affordable housing in D10.

Pointing out that Cohen had voted “no endorsement” at the Democratic County Central Committee on Proposition G — the measure that would tax property-flipping to discourage real estate speculation and evictions — Kelly said, “This is not a time to be silent.”

While Cohen had accepted checks from landlords who appeared on the Anti-Eviction Mapping Project’s list of worst offenders for carrying out Ellis Act evictions, Kelly said he’s pledged not to accept any funding from developers or Ellis Act evictors. Asked if any had offered, Kelly responded, “Some. They’re not knocking down my door.”

Cohen told us that she hadn’t supported Prop. G, a top priority for affordable housing advocates, because she objected to certain technical provisions that could harm small property owners in her district. As for the contributions from Ellis Act evictors, she said the checks had been returned once the error was discovered. Her formal policy, she said, is not to intentionally take money from anyone involved in an Ellis Act eviction.

Speaking outside Potrero Terrace, Kelly said he thought all housing projects built on public land should make at least one-third of their units affordable to most San Franciscans. He also said renovation of public housing projects could be accelerated if the city loaned out money from its $19 billion employee retirement fund. Under the current system, funding for those improvements is leveraged by private capital.

Mold, pests, and even leaking sewage are well-documented problems in public housing. Dorothy Minkins, a public housing resident who joined Kelly and the others, told us that she’s been waiting for years for rotting sheetrock to be replaced by the Housing Authority, adding that water damage from her second-floor bathroom has left a hole in the ceiling of her living room. She related a joke she’d heard from a neighbor awaiting similar repairs: “He said, Christ will come before they come to fix my place.”

Lack of affordable housing is a sweeping trend throughout San Francisco, but it presents a unique challenge in D10, where incomes are lower on average (the notable exceptions are in Potrero Hill, dotted with fine residential properties overlooking the city that would easily fetch millions, and Dogpatch, where sleek new condominium dwellings often house commuters working at tech and biotech firms in the South Bay).

Home sale prices in the Bayview shot up 59 percent in two years, prompting the San Francisco Business Times to deem it “a hot real estate market adorned with bidding wars and offers way above asking prices.”

One single-family home even sold for $1.3 million. Historically, the Bayview has been an economically depressed, working-class area with a high rate of home ownership due to the affordability of housing — but that’s been impacted by foreclosures in recent years, fueling displacement.

Although statistics from the Eviction Defense Collaborative show that evictions did occur in the Bayview in 2013, particularly impacting African Americans and single-parent households, Cohen noted that evictions aren’t happening in D10 with the same frequency as in the Tenderloin or the Mission.

“When it comes to communities of color in the southeast, it’s about foreclosure or mismanagement of funds,” explained Cohen.

She said that a financial counseling services center had opened on Evans Street to assist people who are facing foreclosure, and added that she thought more should be done to market newly constructed affordable units to communities in need.

“There’s an error in how they’re marketing,” she said, because the opportunities are too often missed.

But critics say more is needed to prevent the neighborhood from undergoing a major transformation without input from residents.

“This district is being transformed,” Richard said. “A lot of folks are moving out — they’re moving to Vallejo, Antioch, Pittsburg. They don’t want to deal with the issues, and the violence, and the cost.”

At the same time, he noted, developers are flocking to the area, which has a great deal more undeveloped land than in other parts of the city.

“The community has no one they can turn to who will hold these developers accountable,” he said. “If the community doesn’t have a stake in it, then who’s winning?”