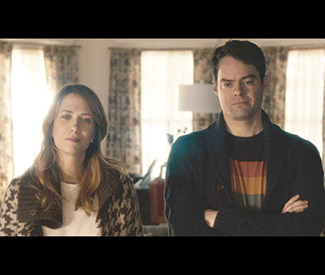 FILM “I don’t know … maybe we were doomed from the beginning,” muses Maggie (Kristen Wiig) at the start of The Skeleton Twins. It’s her voice-over, but the figure onscreen is her brother, Milo (Bill Hader), who mopes to Blondie before flopping into a bathtub that slowly fills with water and blood from his slashed wrists. The twins haven’t seen each other in over 10 years, and the ice takes awhile to break when Maggie appears at his hospital bedside. They’ve been separated by geography (he’s in LA; she still lives in their hometown of Nyack, New York) and lifestyle — recently separated from his most recent boyfriend, Milo’s on his way from being a struggling actor to simply being a failed one; Maggie’s a married dental hygienist whose life seems to be in perfect working order. Seems.

Of course, we share her secret: On the same day Milo was penning a suicide note — “See ya later,” with a smiley face — Maggie was on the verge of gobbling a handful of pills in order to make her own permanent exit. Her marriage, to perfectly oblivious Lance (Luke Wilson), is a snooze, and she’s been secretly been taking birth control despite his much-vocalized desire to have kids ASAP. She also hasn’t, ah, been entirely faithful. Clearly, these siblings have more in common than they realize. They’re both deeply miserable, unable to shake a troubled past that includes their beloved father’s suicide, a distant mother (Joanna Gleason) who prefers New Age clichés to honest communication, and the scandalous incident (involving Milo and his high school English teacher) that caused their estrangement.

There’s only one path for these sad sacks (since if one of ’em actually died, that would make this black comedy a little too black), so they set about trying to mend fences. Milo moves into Maggie’s Pottery Barn catalog of a house, and though the surroundings are twee suburbia, the mood is decidedly desperate. Milo’s former teacher (Modern Family‘s Ty Burrell) is still in town, still closeted, and still as confusing a figure to grown-up Milo as he was to teenage Milo. And Maggie is hardly a calming presence, having realized long ago that her husband is alllll wrong for her, despite the fact that he’s possibly the nicest, most understanding dude on the planet. It’s obvious — despite their frequent arguments, and the fact that both do some pretty terrible things — that the only bond in The Skeleton Twins that has any chance at repair is Milo and Maggie’s.

Produced by indie darlings Jay and Mark Duplass, and directed by Craig Johnson (whose co-writer, Mark Heyman, also co-wrote 2010’s Black Swan), The Skeleton Twins might veer too deeply into melodrama territory were it not for its restrained script, and its appealing cast. Saturday Night Live alums Wiig and especially Hader are mostly known for their comedic talents — we all saw Wiig give good pathos in 2011’s Bridesmaids, but it’s impressive to see the same actor who portrayed flamboyant club kid Stefon bringing depth to a more serious role. (Not to say that Skeleton is entirely grim; there’s an extended lip-sync sequence that fans of the soundtrack to 1987’s Mannequin will find difficult to resist. Plus, this is very much a family that uses sarcasm as a survival method … and, sometimes, nitrous oxide.)

It’s also gratifying to see a relationship movie that’s not solely focused on romance. In fact, the film’s message that squaring away one’s beef with the family members that matter most (once you’ve jettisoned those beyond all hope, like Maggie and Milo’s selfish, Sedona-dwelling mother) is an important step toward healing and finding-your-true-self-ness. And it just so happens that The Skeleton Twins is being released not long before the holiday that holds so much meaning for its protagonists: Halloween. Though many a family drama pivots around Christmas, The Skeleton Twins is a tad too smart for that, and far too aware of the ways life can sneak razor blades into its twists and turns. *