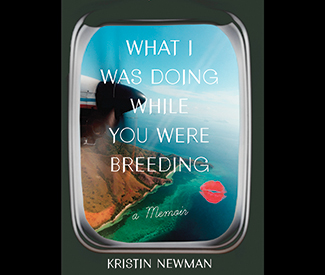 LIT In her 20s and 30s, Kristin Newman had built an enviable career writing and producing hit shows like That ’70s Show, How I Met Your Mother, and Chuck. But her personal life proved far less satisfying; after breaking up with her first love, she bounced between relationships while watching her friends settle down and spawn. Fortunate to have a job that allowed for months-long vacations between TV seasons, she began pursuing her wanderlust tendencies in earnest — emphasis on the “lust,” since her travels to places like Brazil, Iceland, Israel, and (especially) Argentina often included flings and what she came to call “vacation-ships” with locals and others she met on the road.

Along the way, she did some soul-searching — but fear not, her memoir What I Was Doing While You Were Breeding (Three Rivers Press, 291 pp., $14.99) is hardly a touchy-feely treatise along the lines of Eat, Pray, Love (more on that later). Instead, it’s a raunchy, witty, relatable look back at journeys that helped guide her into the next chapter of her life, at her own speed, with plenty of disasters and stirring moments along the way. I had to meet the woman behind the book, so I called her up in Los Angeles (her current project is upcoming ABC comedy Galavant, which has a fairy-tale theme and was created by Dan Fogelman, who wrote 2010’s Tangled).

SF Bay Guardian What I Was Doing While You Were Breeding is an evocative title. How did you come up with it?

Kristin Newman I thought I’d just write a few funny stories, kind of as writing samples, to get my next sitcom job. All of a sudden, I had 70 pages. It all happened the same month that I met my now-husband, and my stepmother died, and it just kind of poured out of me.

As I sat down to write, I realized [with all these trips and relationships], I wasn’t just biding my time and being silly while waiting for something to start. What I had been doing was actually its own important thing: finding a new way to be happy. My friend, who has a kid by the way, suggested that I call it What I Was Doing While You Were Having Stupid Babies [laughs]. I thought that was going to turn too many people off. So we went with Breeding.

SFBG The title might lead some to believe that you don’t like children, but anyone who reads the book will realize that’s not the case.

KN I always wanted to have kids. But deep into my 30s, I absolutely was not ready yet. Biology kicks in at a certain point, and I felt like I saw so many people around me jumping into things just because of their age, after waiting so long. I knew that I theoretically needed to figure things out, but I just wasn’t feeling it yet. I was always cool with adopting, and I write about freezing my eggs, because I felt like, I can’t let this number dictate what I do. It’s too big of a decision.

SFBG The book is a personal memoir, but it’s also a guidebook of sorts. What’s your travel philosophy?

KN The biggest thing is: Go where the guidebooks don’t tell you to go. Find locals and ask them where their secret places are. Dating a local is a great way to get advice from a local — that’s why I love a vacation romance! If you’re traveling alone, don’t go for the high-end places, even if you can afford them, because that’s not where single people go. It will be all married old people who aren’t going to want to hang out with you. If you’re not 21 and don’t want to hang with the backpackers, shoot for the mid-range.

Always say yes! And then find out how many amazing things happen as a result of accepting invitations to places, or checking out something new that somebody you meet one day suggests. The best things always happen because I say yes to something. Then, it empowers you to do that when you get home, too. Even when I can’t jump on a plane, I take a book and read alone at a restaurant, which I never used to do. I’ll walk into parties alone, or take myself to a museum. I do a lot more things alone in my own town, and that changes everything. You just feel like, “I can handle it!”

SFBG Do comparisons with  Eat Pray Love drive you crazy?

KN I wrote about that book in my book, because I knew that people would compare the two. It doesn’t drive me crazy — that book touched a lot of people, and that’s great. I had a complicated relationship with that book, as I think a lot of people do, dealing with the concept of “misery of the entitled person.” I think that all kinds of people who have entitled, lucky lives can be horribly miserable — look at Robin Williams. So I don’t blame [Elizabeth Gilbert] for her self-created misery, as someone who creates her own misery on a regular basis.

But I wanted to try and take myself a little less seriously, and have a much more comic, self-deprecating approach to the silliness that was my tail-chasing. That was my goal, to have it be fun. Also, by holding off on having sex for most of that book, I feel like she missed out on a really easy way to feel better! [Laughs.] *