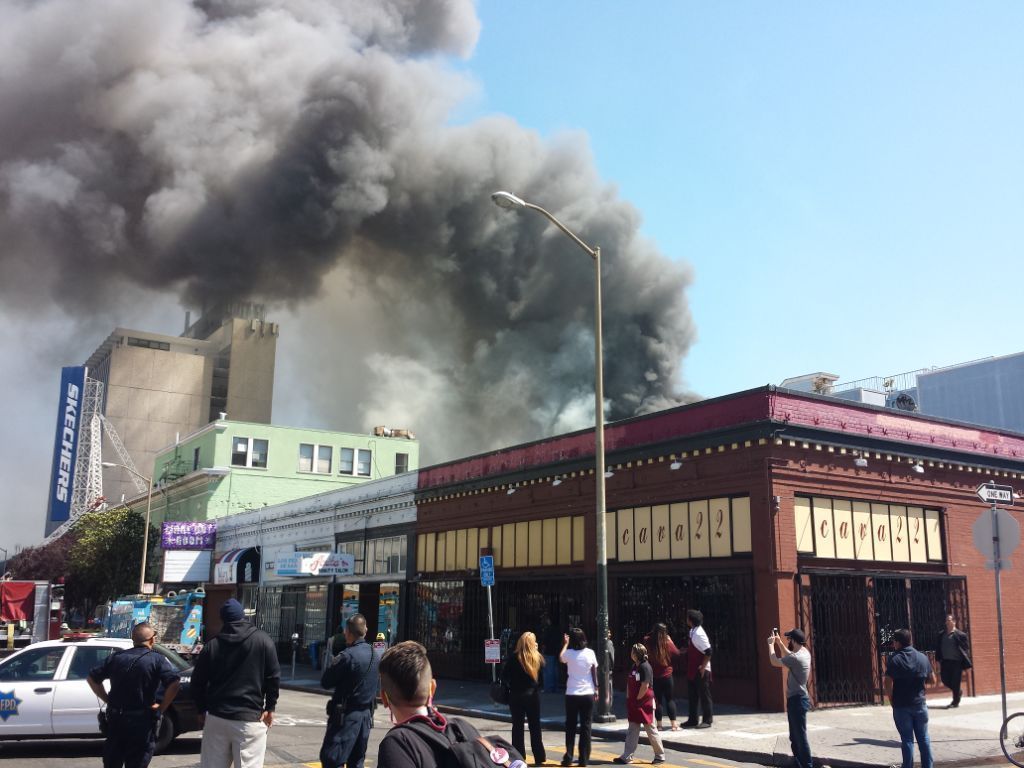 Editor’s note: We received this firsthand account from Ben Rosenfeld, who lives in close proximity to the site of yesterday’s [Thu/4] 5-alarm fire. Read more about the blaze in the San Francisco Examiner.

For those who don’t know, we were lucky our building survived a 5-alarm fire yesterday, almost directly behind us (feet away). Fortunately too, there were no serious injuries.

“Fire watch” crews stayed through the night in the back yard dousing flare ups, and are still here now keeping an eye out. Supervisors, inspectors, and news crews have come in and out. [Department of Building Inspection] inspectors came to confirm the obvious: that the building that burned would be condemned. And AT&T showed up and concluded that their engineering department will need to rewire, as our wires come off the building which burned and which undoubtedly will be demolished. Remarkably, though, my phones still work.

There’s no question that the SFFD’s swift and overwhelming response (and decision to “go defensive” and contain the fire in the unit it broke out in) saved this building and the neighbors’. It was amazing to watch them in action and talk to them about their craft.

I saw the smoke when it was little wisps coming out the back (I happened to be in the back room looking out the window while on the phone), and ran out with a fire extinguisher (absurdly as it turned out), calling 911, and yelling “fire,” and reporting that 911 advised us to evacuate.

I think we banded together really well as residents, working to make sure everyone was alerted and accounted for. We want to help the neighbors rebuild their garden with a neighbor solidarity party in which we also discuss disaster contingencies.

This was a good lesson in the meaning of the phrase, “we’re all in this together,” and in how dependent for our safety we are on one another – especially in SF, where we’re almost literally stuck together.