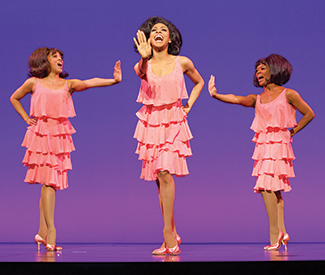 THEATER As recently as last month, Berry Gordy Jr., the 84-year-old music mogul, founder, and creator of Motown Records, was hailed as an American icon and an African American hero. Those were Congresswoman Barbara Lee’s words Aug. 18 when it was declared “Berry Gordy Day in the East Bay.”

Impeccably dressed, Gordy made a rare public appearance to speak and receive his accolades on the steps of Oakland’s City Hall. He briefly reminisced about his life’s achievements, particularly building Detroit’s Hitsville USA, not only in a physical sense, but also creating “The Sound of Young America,” as his label would come to be known to the world. Live cast performances from Motown the Musical, the theatrical show based on his autobiography from nearly 20 years ago — To Be Loved: The Music, The Magic, The Memories Of Motown — were interspersed throughout the event.

The Kevin McCollum production (Avenue Q), directed by Charles Randolph-Wright, is running through Sept. 28 at San Francisco’s Orpheum Theatre. But how does one fit all that the Motown-Gordy life story encompasses in a matter of just a few hours?

One sure way to please the audience is through music, which the production certainly does. Here we get a condensed version of a story that deals with America’s recent racist history, with scenes set at the Motortown Revue (which allowed segregated audiences in the South), to the full-on love story where Gordy’s muse, Diana Ross (convincingly played by Allison Semmes), serves as the impetus for his own business savvy and crossover to success with white audiences.

In the early ’60s, the industry still referred to Gordy’s output as “Negro” or “colored” music, or worse. African Americans weren’t seen as entrepreneurs — and owning an independent, predominantly black label was a revolutionary statement to say the least. Gordy’s personal history of being a boxer who idolized Joe Louis in the 1940s, and later borrowing $800 from his family to launch a recording studio, is chaotically interwoven with glazed-over details of complex business deals and lawsuits.

It’s not surprising, considering this is a musical, that an overreliance on a hefty catalog of sentimental songs that resonate throughout generations is a recurring theme. A combination of well-executed choreography and the hits we’ve come to know by the Supremes, Smokey Robinson, the Temptations, the Four Tops, Marvin Gaye, Stevie Wonder, and the rest of the roster probably make for a more entertaining evening than going into detail, say, about top songwriters Holland-Dozier-Holland defecting to create their own label, Invictus. Or the way top artists like the Jackson 5 and Ross would jump ship to other labels like RCA and Epic for more creative control or financial reasons. And any tales of Gaye’s in-studio drug use (documented in writings as being annoying to Ross while they recorded together during her solo years) are excluded, because this story is told from Gordy’s perspective.

And there are other exclusions. While it’s great to see the early acts from Gordy’s early Motown-Tamla Records days — such as Jackie Wilson, the Contours, Barrett Strong, and Mary Wells — getting recognition, Gaye’s frequent duet partner, Tammi Terrell, gets the shaft with nary a mention. It could be seen as added insult, but is more likely a gross oversight, when cast members depicting Gordy and Ross sing the Ashford and Simpson-penned soul ballad, “You’re All I Need to Get By,” one of Terrell’s signature hits with Gaye.

After the intermission, the latter half of Act Two seems especially rushed, though the costumes, sets, and décor during the Black Panther-Vietnam protest-Detroit riot eras, and the company’s relocation to Los Angeles in the early ’70s, are particularly vibrant.

As soon as we emerge from the tumult of the ’60s and the somewhat understated effects of Martin Luther King, Jr.’s assassination, the Jackson 5 are introduced (Reed Shannon plays the young versions of Gordy and Wonder, as well as Michael Jackson), and Ross’ solo career advances when she leaves the Supremes. Gordy’s master plan to have her sing standards in order to assimilate has often been a point of criticism, not only in this case, but also for his other acts, who have been accused of not being “black enough.” Eventually, though, it pays off when she plays grandiose venues that allow for elaborate stage productions. Her subsequent entrance into movie stardom seemed to be something he was grooming her for all along.

Motown revolutionized the world’s perceptions of music. Gordy’s story is one of success through persistence. Most (if not all) of his label’s artists share the same narrative of overcoming obstacles and having to struggle. After all, these were performers who literally had to dodge bullets on stage when they toured the South.

Audience members would be out of touch or ignorant if they couldn’t see the modern-day parallels in racial divisions — unrest and outrage over Mike Brown’s shooting death by police in Ferguson, Mo., had been going on for about a week at the time of Motown‘s press night. Viewers may have to ask themselves how much has changed in the last 50 years. That alone could merit this production’s cultural relevance, if not some harsh realizations. But I have a feeling most people crave those feel-good hit-factory songs, which do make seeing Motown the Musical worthwhile. *